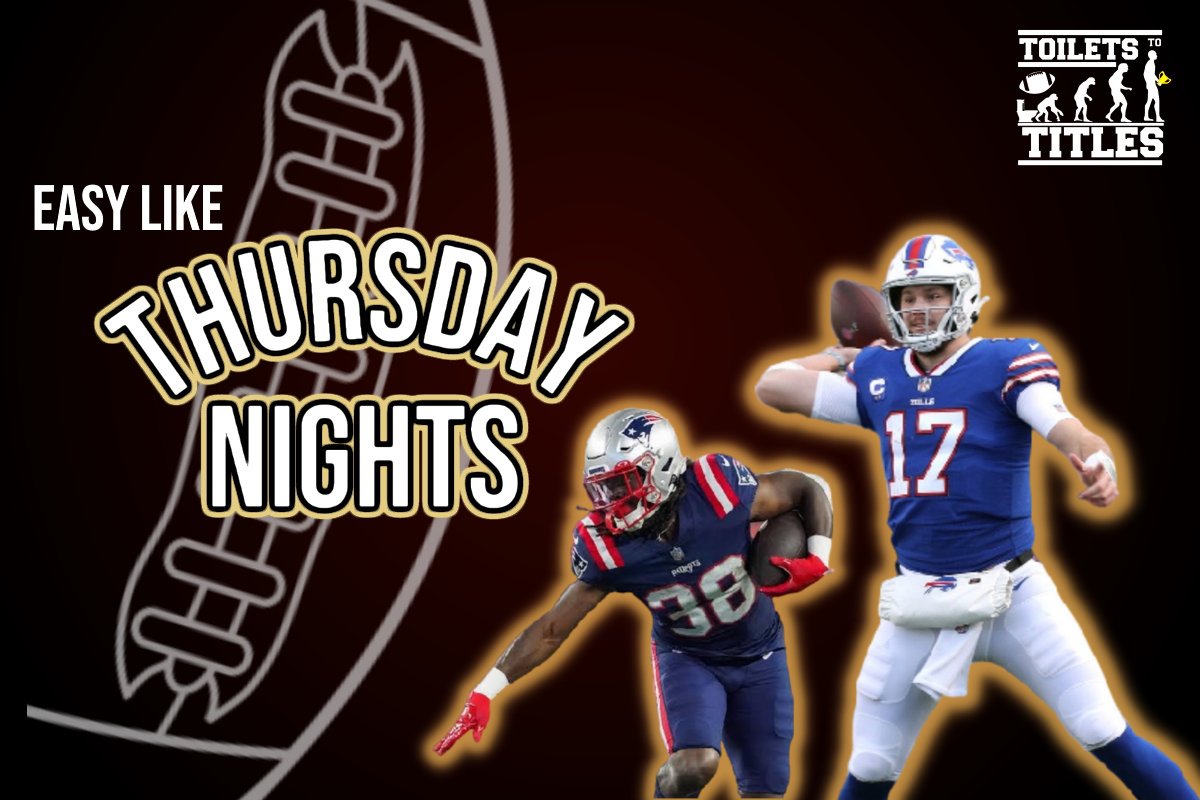 We did it!!!  We have survived the sludge, the waste, the excrement of bad Thursday night football match-ups to get us to what is staring us in the eye approximately 30 hours from now which is a huuuuuuuuuge AFC and AFC East game between the Buffalo Bills and New England Patriots!  The division as a whole has overachieved so far in 2022 with all four teams sporting a winning record 12 weeks in.  This matchup will be pivotal in deciding the outcome of the division as the Bills and Dolphins are tied at 8-3, with the Jets sitting in 3rd at 7-4, and the Pats currently sitting in last place despite the 6-5 record and 2 wins against the Jets in the past month!!  There is plenty of fantasy relevance with these two teams, which will also make for an entertaining and tricky single game finest!

The Patriots have had a rollercoaster of a season so far and find themselves limping into Gillette Stadium, both literally and figuratively, this week coming off of a Thanksgiving day loss to the Vikings after previously winning 3 in a row.  In addition to the loss, the Patriots left Minnesota with a banged up roster and at time of print the Thursday night status for both Jakobi Meyers and Damien Harris is still up in the air.

The million dollar question as always is… What do we know about the Patriots from the fantasy perspective?  We know that Rhamondre Stevenson is a DOG and has become the most valuable fantasy asset the Patriots have put out on the field in a good few years – His ability to participate and play a key role in the passing game has made Stevenson a top 10 RB as he has not scored less than 13 DraftKing points since week 4, and he has 5 games of 20+ since then. With D. Harris looking closer to a DNP this week, Stevenson should easily have 20+ total touches this week especially if the game script has them playing from behind.

That same game script could also add some value to Mac Jones and the Patriot receivers. Jakobi Meyers is banged up, however it looks like he will suit up but potentially take on a lesser role due to injury.  Devontae Parker is finally healthy and went 4/80 last week and Hunter Henry has come back to being Jones’s favorite red zone target at $5,600 and $4,600 respectively.  We think both those guys can prove valuable this week.  In addition, Nick Folk (K) has proven to be a solid play all season long when you are looking for the cheap play to fill in your line up.

Okay, so here is our caveat of the week before we get to the Bills side of things – we are including two line ups this week because of the Damien Harris factor.  If Harris is indeed out this week, we are loving whoever slides into the back up role for the Patriots whether that is Pierre Strong or JJ Taylor, as they are both coming in at just a $200 salary. We know Billy B lives to run the ball against this Buffalo team when they can and Stevenson will need breathers throughout the game, so at just $200 if we can get 5-points from that Patriot backup RB I think we will be well on our way to cashing in!

The Buffalo Bills…. Well yes they are going through a little mid season offensive slump, however their version of an offensive slump still has Josh Allen clocking in at 25+ points most weeks and the Bills are still scoring, so I am more concerned about the specific match up against the Pats defense more than any actual issue with the Bills offense.  We plan on deploying Bills weapons as we normally would, however we will stay away from their running game for the combination reasoning of it 1) not being their strong suit anyway, and 2) the fact that the Patriots have a top 5 rushing defense.

So the question with the Bills is…who else are we playing in addition to Josh Allen?  The two line up scenarios give us the chance to go Diggs in one and Gabe Davis in the other.  We want to love Gabe Davis so much but he is just so fantasy-inconsistent!!!  The same can be said about Isiah McKenzie, however, with McKenzie coming in at $6,800 ($1,200 less than Gabe Davis) there is a little less risk with playing McKenzie, even though he also (in between his flashes) is fantasy inconsistent at this point in his career.  Dawson Knox was on our radar but his 2/17 line against Detroit last week has scared us off of him as $6,200 is a little steep for a tight end who is not top tier.  We have each kicker in one line up as both of them have been top-10 kickers this year, and have had more double digit point games then single digit ones.