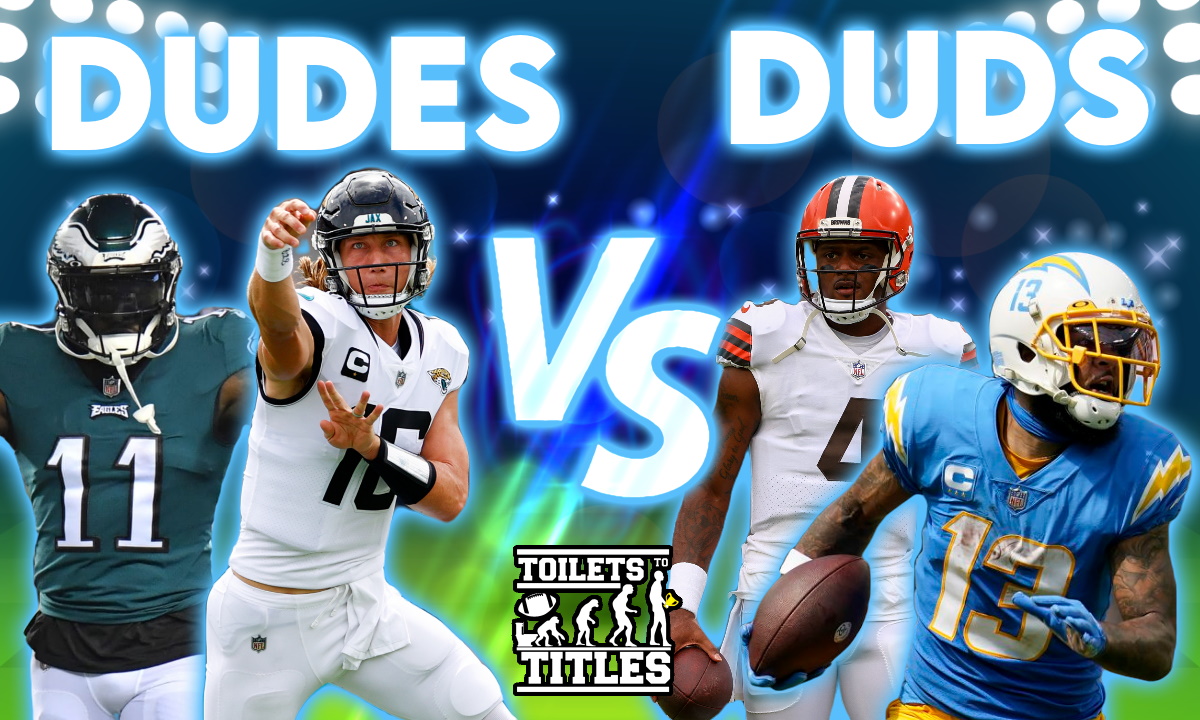 Lawrence is coming off of his best statistical outing of the season against a much tougher Ravens defense. This week in Detroit, he’ll face a Lions defense that is allowing a league worst 24.6 points per game to opposing QBs. Ride the T-Law wave!

The Jets defense is just outside the top 10 in fantasy points allowed to opposing RBs so far this season. That being said, Cook had his 3rd best game of the year against the the #10 ranked Bills defense and game script should dictate a heavy workload for Cook this week.

It seems as though Dameon Pierce has hit the dreaded rookie wall, scoring a measly 6 total fantasy points combined over the last 2 weeks. An emotional game against a terrible rush defense with one of the league’s best RBs on the opposite sideline should be just what the Dr. ordered to get Pierce back on track.

Brown has been rather quiet over the last few weeks but I expect the Eagles game plan this week to rely less on the run and more so on attacking the Titans 31st ranked passing defense. This week will be the 3rd time AJ Brown has topped 100 receiving yards so far this season.

Zay Jones, we see you. It is about time we gave this man his flowers. Jones scored 27 points the hard way this past week, 11 receptions, 145 yards and no touchdowns. It seems Lawrence is heating up and Jones is heating up right with him.

Look for a bounce back performance from Kittle who faced the Saints and their league best defense against the tight end. This week, there will be plenty of scoring and I expect Kittle to be on the receiving end of quite a few targets from Jimmy GQ.

Pacheco has been the beneficiary of playing in an offense that makes defensive passing game coordinators have nightmares. I like his match-up this week against a middle of the pack Bengals defense and I believe he is the ideal flex play with a high ceiling and high floor.

Though I think that the Vikings will beat the Jets this week, I think it will be more so on the play of their defense as well as their running game. Sauce Gardner vs. Justin Jefferson will be must see TV!

This homecoming will not be a welcomed one. The Texans will be up for this one and their defense that has allowed the 3rd fewest points per game to opposing QBs so far this season will have Watson ready to leave Houston ASAP yet again.

Something is up with Saquon. He’s had a few decent match-ups over the last 2 weeks and yet failed to deliver. Barkley and the Giants will travel to Washington to face a Commanders defense that I expect to be more ready to defend Barkley than ever after facing the Falcons and their diverse running back committee.

Last week, Wilson faced the league’s worst run defending defense and came out of the match-up with just 11 PPR points. This week, Wilson heads back to San Francisco to face the 2nd ranked run defense as well as an opposing coach who knows the ins, outs, strengths and weaknesses of the Dolphins run scheme.

Last week, Allen showed us that the phenomenal hands are still there but he looked to have lost a significant amount of burst. In short, Allen has looked old and slow and the Chargers are doing a good job of spreading the ball out to the rest of their wide receivers.

Brate and Otten combined for a total of 4 PPR points in week 12. This week, they have a much tougher match-up with the New Orleans Saints who are only giving up a league best average of 7.7 PPR points to opposing TEs so far this season.

I think this match-up against division foe, New York Giants, will be one that is a low scoring affair. This will be the 3rd week in a row that Terry fails to score 10 PPR points or more.