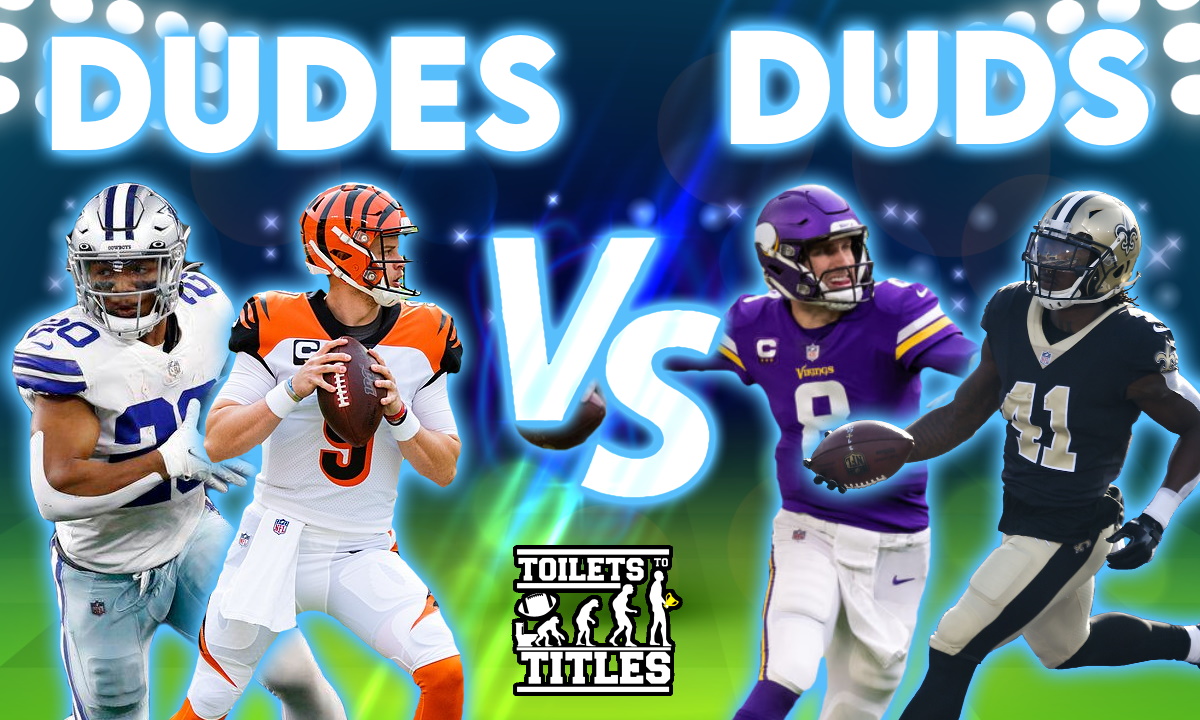 Last week, Burrow looked like what we all expected him to look like this season. Burrow finished the day with 355 passing yards and 4 touchdowns. The Titans defense is allowing an average of 20 points per game to opposing QBs which is good for 3rd worst in the league. Burrow’s back, start him with confidence!

Who’d have thought that to this point Geno Smith would be QB 9 on the season with average points scored? Not me! Smith and the Hawks will face a Raiders defense that has been absolutely horrendous against the pass and the Hawks should be fresh coming off of a bye.

The Cowboys beat the brakes off of the Minnesota Vikings but Dalvin Cook quietly averaged 6 yards per carry…If the Cowboys hadn’t gotten so far ahead, I believe Cook would have had a monster day. Barkley is coming off a quiet game but I expect him to shine bright on Thanksgiving.

Man, I thought Tony Pollard would have a quiet week coming off of a loss and having Ezekiel Elliott back in the mix. Zeke poached 2 short yardage touchdowns from Pollard and Pollard still had a day. I’m starting to think Pollard is an every week start.

The squeaky wheel gets the grease? Or something like that…Diggs was seen having a heart to heart with head coach Sean Mcdemott during the Bills win over the Cleveland Browns this past week and I’m assuming that conversation wasn’t about who’s bringing the turkey to their thanksgiving party.

Michael Pittman has 25 fantasy points over the last 2 weeks since Matt Ryan was inserted back into the starting role at quarterback. Joe Burrow exposed the Steelers secondary last week and I expect Ryan to have a decent day connecting with Pittman. The Steelers will need to deal with JT which should open things up even more for Pittman.

McBride has the Tight End 1 role all to himself now that Zach Ertz is out for the season with injury. We’re uncertain whether or not it will be Colt McCoy or Kyler Murray throwing him the ball in this one but regardless, I expect McBride to get it done against a Chargers defense allowing 12 points per game to opposing Tight Ends.

I know that Wilson is not the bellcow nor the lead back in Miami but the Dolphins are facing a Texans team allowing an average of 30 points per game to opposing running backs, there will be plenty of points to go around. Look for Wilson to follow up his 17/119/1TD performance in week 10 with another strong outing.

After Kirk Cousins got hit on the opening drive by Micah Parsons, he looked as if he never recovered. The nightmare will continue for Cousins, unfortunately, due to the fact that a prime time game is looming against a stingy New England Patriots defense.

Hurts saved what could have been a rough Fantasy outing as well as a rough result for the Eagles by scoring a last minute rushing touchdown. This week, The Eagles face the Packers in Green Bay where the temperature is expected to be in the low 30s. Look for another low scoring affair with a minimal fantasy point output for Hurts.

Over the last 3 weeks, Kamara is RB23 while averaging just 9 fantasy points per game. The San Francisco 49ers have linebackers like Dre Greenlaw and Fred Warner who can keep up with Kamara in the pass game and can also keep Kamara from getting to the edge on the ground. I’m hoping Kamara bounces back soon but I don’t think that will happen this week.

Since returning from injury, Swift has only touched the football 30 times in a 4 game span…that is not promising. Jamaal Williams is running well and the Lions coaching staff seem to have a grip on the running back rotation they would like to deploy weekly. Unfortunately for Swift, he is currently the 2nd option.

The Colts defense have been giving opposing WRs the clamps as of late, their last victim being AJ Brown who was held to only 9 fantasy points in week 11. Up until their Bye week, Johnson was averaging 10 targets per game…since then, he’s been averaging only 5. That’s just not going to get it done.

The Jets defense is allowing an average of 22 fantasy points per game to opposing WRs which is 5th best in the NFL. Justin Fields is a little banged up and even when healthy in a juicy match-up last week against a Falcons defense that can’t stop the pass AT ALL, the passing attack couldn’t get going.

The New Orleans Saints are the 2nd best defense in the league at stopping opposing tight ends. From weeks 6-8 it seemed as if Kittle was back to his old TE1 self but I think that was more of an outlier and not the norm. The Saints will likely prove that when they hold him to below 6 fantasy points in this match-up.

Patterson managed to score a total of just 13 fantasy points over the last 2 weeks while facing the league’s 27th and 28th ranked rushing defenses. If you play in leagues where you get points for return touchdowns then you got a bit more out of him this past week but kickoff return touchdowns will not be a weekly occurrence. The Falcons play the Commanders this week and they’re currently the 6th ranked rushing defense.