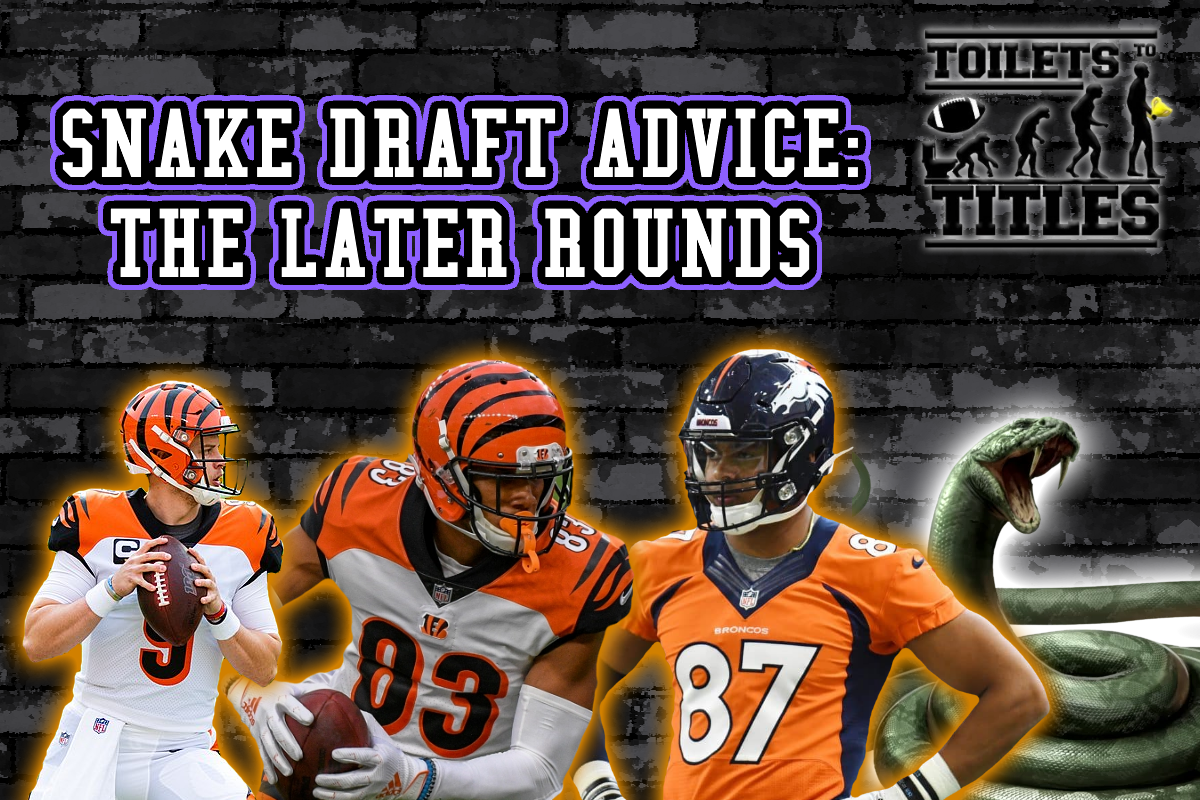 This is part three of, a now, three part series where I offer my advice on who should be targeted at certain draft positions up until the 7th round since ADP usually starts to go out the window around that point. The advice given is for the most popular league style, 12 team, 1QB, PPR, average roster size. The other columns will address picking from the 1 or 2 spot, the 6 or 7 spot, and the last column will be all of the guys I like in the 7th round and later who I’m targeting regardless of draft position. Last bit of housekeeping, all ADPs being used are from Sleeper, which is the number seen next to all of the names listed.

So without further ado let’s get to the guys I’m looking to take in the later round of the draft.

Time to solidify your starters and perhaps start adding to your bench.

Tyler Boyd (81): Boyd may be the best of the Bengals wideouts this year but his ADP comes in at a very low cost. A seventh round pick to get a guy who could easily catch 90 passes for 1,000 yards and 6 touchdowns? Sign me up for that.

Brandin Cooks(94): The Texans are going to be an absolute trainwreck this season regardless of whether Watson plays or not. This means a lot of games where the offense is going to have to air it out to try and play catchup.  No matter who is throwing the ball, there has to be someone out there to catch it and why wouldn’t that be the Brandin Cooks. I hate the inconsistency he has shown on a game-to-game basis in his career but not when I can get him as the number one option on a bad team in the 7th or 8th round. Cooks will win you 2-4 weeks all on his own this year.

Mike Davis (82): What’s this? A starting running back with no clear threat to take his job available for the taking this late in the draft? Yes please. It may not be pretty to watch but Davis showed he can get the job done in the interim and while there is the definite chance he can’t manage the load for 17 games.  I’ll take solid running back production for 8-10 games and then take my chances on the waiver wire if I need to replace him. Running back depth is almost never a wasted thing.

Javonte Williams (93): Am I advocating for you to draft a handcuff without having drafted the starter? Yes. Yes I am. The Broncos clearly thought highly of Williams by trading up to get him and I don’t think it takes long at all for him to take the job from Melvin Gordon. Whether through an injury to Gordon (likely) or just because Williams is much more talented than Gordon at this point in their careers (more likely). There’s also the fact that Williams is a tackle breaking monster with a coach who loves to run the ball on a team who is paying Drew Lock and Teddy Bridgewater to play quarterback. It might take a little longer than you want but I think Williams is a league winner in the second half of the season.

Noah Fant (77): Listen, I’m not saying you should be confident in Drew Lock or Teddy Bridgewater but here’s how I view the situation: Teddy is currently starting. He’s a mostly competent NFL QB who also can’t launch the ball downfield.  So, Fant will be the main beneficiary if that’s the case. If Lock takes over mid year that means either Teddy got hurt or Lock made enough improvements to beat out Teddy and again Fant will benefit from that. His talent is through the roof and of all the dart throws at the position, he’s my favorite.

Kyle Pitts (89): He has an above average quarterback on a team that just traded away a player who has averaged 132 targets per season over the last 10 years. I don’t expect Pitts to command that many targets in his rookie season but I do think this is the one time you break the ‘don’t draft a rookie tight end’ rule. He will be solid this year with exponential growth to come.

We are getting into dart throwing territory here but there’s some value to be found.

Michael Pittman: The 34th overall pick in the draft only last year and somehow he’s being written off in most places. Not here. In fact he’s my favorite target at this spot in the draft. He’s a year older, wiser, and healthier. Also, he just got a major upgrade at quarterback. Last year the Colts were a Philip Rivers away from being the AFC’s Cinderella story. I’m not saying the Colts could have beaten the Chiefs last year but I’m very confident they will be in contention for a top playoff seed come the end of December this year. Additionally, I think Pittman will be a huge reason as to why that happens. Oh and T.Y. Hilton just went on Injured Reserve to start the year. That horn you hear is the Micheal Pittman bandwagon leaving the station. All aboard!

Laviska Shenault: Urban Meyer may be lamenting that he missed out on Kadarius Toney but not for long. He’ll soon realize that he has an even better version of the same player in Shenault. He might be a little boom or bust game-to-game but my prediction is that when he booms, he’s really going to boom.

Trey Sermon: See: Raheem Mostert. I’m all in on the 49ers ground attack this year and I also think that Sermon takes over the full time job before Halloween.

Joe Burrow: Did you miss out on that QB run earlier? No need to fear Baby Aaron is here (take it to Vegas, that nickname is definitely gonna stick). As I mentioned before in the Tee Higgins part the Bengals are going to be awful on defense again so Joe is gonna throw, throw, throw. The knee injury is something to monitor through camp but all reports indicate he should be fine and while you won’t get a big bump in fantasy production from him via his legs he should more than make up for it with his arm.

Matthew Stafford: Cam Akers just went down at the time I wrote this article. So, Stafford’s ADP may not stay here but if it does and you missed out on one of the top end QBs you could do a lot worse than Stafford. He’s not going to give you much in the rushing department but now that he doesn’t have Akers to lean on in the ground attack, I think this gives his passing stats a big boost. Does Darrel Henderson fill the void of Akers and prove me wrong? Probably, (screw you Karma!) but after two years Henderson hasn’t shown he can carry the load. So, I’m banking on that trend to continue and for Stafford and the Rams offense to be an all out aerial attack this season.

Everything at this point is a dart throw. Here’s who I like:

Carson Wentz: Don’t sleep on the Colts, they are going to be excellent this year. As far as Wentz goes, you either believe that Frank Reich is the key to unlocking Wentz’s fantasy success or you don’t. I believe. I also believe Wentz will be back under center by week 1 and so will Quenton Nelson. The Colts are going to be good and very efficient.

Baker Mayfield: I was never a big Bake Show fan but Kevin Stephanksi is making me a fan of what he is doing in Cleveland. I don’t think Mayfield puts up huge numbers on a weekly basis but I think he has a super efficient season which will keep him near the top 12 weekly and could be an excellent streaming option from week to week.

Darnell Mooney: Anthony Miller got shipped to Houston and Mooney’s ADP likely gets bumped up but he’s the go to deep threat on this team. A likely boom or bust option on a weekly basis he’ll be a great bye week fill in and could win you a week or two with a couple of 4 catches for 160 yards with 2 touchdown games.

Gabe Davis: I liked a lot of what I saw from Davis his rookie year and I liked it even more when John Brown left town. I don’t like that the Bills signed Emmanuel Sanders but he is 34 years old and, the more I thought about it, I think he was signed to be a solid veteran presence for the team. I don’t think he takes a ton of work from Davis. There’s also the possibility that the Bills cut Cole Beasely which should free up even more targets for Davis.

Blake Jarwin: Everyone predicted a break out last year but then he tore his ACL. Now the Jarwin bandwagon is emptier than your local Toy-R-Us. Except for me. I’m like that creepy mannequin they forgot to take out of the window. Just there. Waiting. Watching… Seriously though, when Amari Cooper goes down (he will) someone is going to have to fill the void for those targets and I think it’s Jarwin. There’s no way Ceedee Lamb can catch two hundred passes this year, right?

Gerald Everett: He’s the best tight end the Seahawks have had since they traded for Jimmy Graham (and then promptly ruined his fantasy career). This time I don’t think the Seahawks mess it up. Everett was brought in by new Offensive Coordinator, Shane Waldron, after their time together with the L.A. Rams. I don’t think Waldron does that without having a plan for Everett. He’s not the sexiest guy at the position but for the price you have to pay to get him I think he turns in some very nice production.

Tua Tagovailoa: Last guy! We made it! Were you disappointed by Tua’s performance last year and not being able to beat out Fitzmagic as the starter.  Then continued to lose out with his mediocre play once he did start? Yeah, me too. But I have good news: First, Tua is a year further removed from the same injury that ended Bo Jackson’s career. I don’t think Tua was ever fully healthy last year and I think that’s why Ryan Fitzpatrick started for the first half of the year. I also think it hampered him still once he was on the field and the coaching staff knew that. So, they kept the training wheels on tight all year. Second, he’s got a brand new coordinator to help him take those training wheels off. Big ol’ buh bye Chan Gailey! If you waited too long on QB you can do a lot worse than a former top five pick and former Heisman Trophy winner who was an absolute stud in college.

That’s it! Thanks for sticking around this long and happy drafting!

Ode to Football and Autumn
Dudes & Duds – Week One