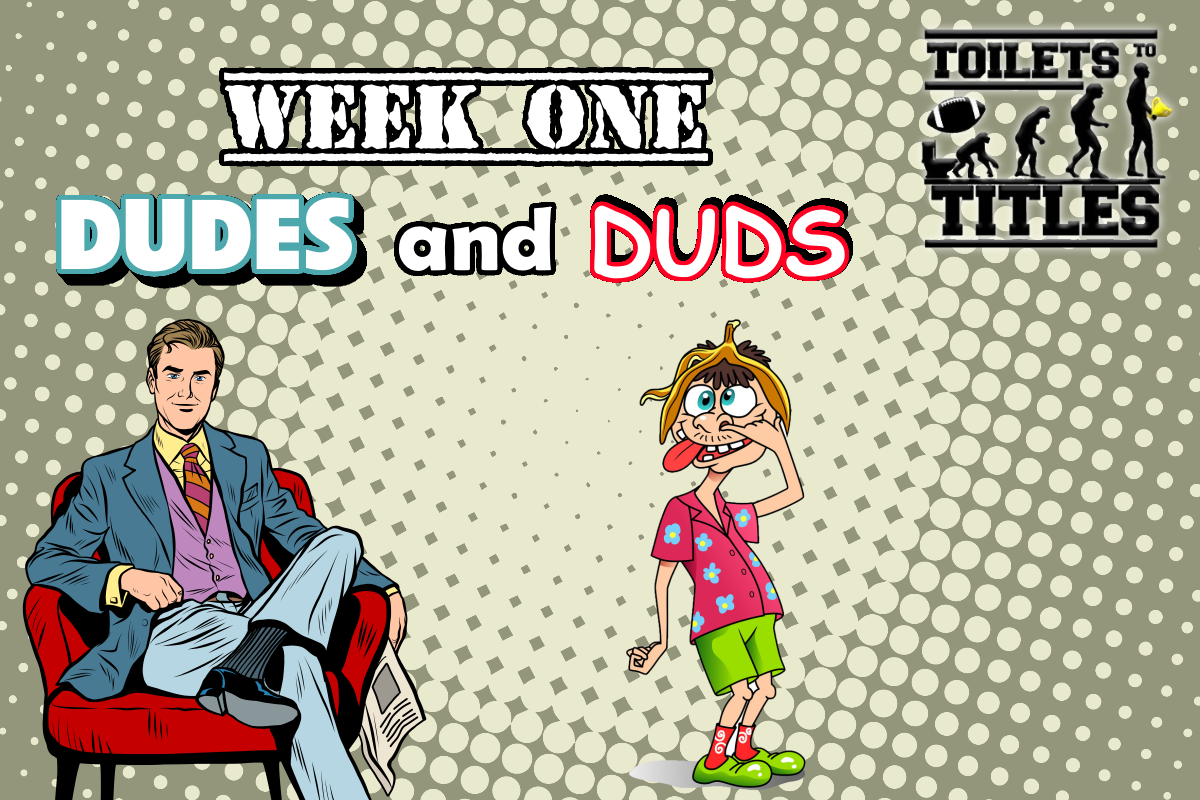 Editors Note:- Throughout the season each week @coachschepps will be posting his Dudes and Duds (Basically starts/sits with a cooler name!). You can also find this on the podcast. Subscribe to the Toilets To Titles podcast and tune in Tuesday nights, 830 PM Eastern https://www.youtube.com/c/ToiletsToTitles

That Texans team is just bad, perfect recipe for a rookie debut we will remember for some time to come.

Odell Beckham Junior, Jarvis Landry, and Donovan Peoples-Jones are all healthy and ready to play. Cleveland is going to have to score early and often to keep this one competitive. Nick Chubb/Kareem Hunt should force defenders into the box thus opening passing lanes…Baker will be dangerous.

No confidence in the Lions defense, Mostert will get going early and have a big day.

All aboard the Gus Bus! With Rashod Bateman hurt & the uncertainty of who will step up at WR, I expect the Ravens to lean heavily on the ground game this week.

The Cowboys have nobody in the slot that can run with Brown. Reports out of Tampa Bay are that Brown looks like he did in his prime. This spells disaster for that Cowboy defense.

The Eagles Secondary was one of the worst in the league last year and they didn’t do much to help it. Calvin Ridley will draw the Eagles primary Cornerback Darius Slay and Pitts should see a lot of space.

The Dolphins very quietly had one of the better defenses in the NFL last year. They’ve added Jevon Holland to that phenomenal secondary and Jaelan Phillips to the edge. This will be a low scoring affair.

I’m not confident in Jameis until I see someone else step up at WR besides Marquez Callaway & until I see Sean Payton use him for the entire game.

Ekeler is one of the sweethearts of the past month. He is decent value at his current redraft ADP but he will not be paying out on that this week. Chase Young, Jamin Davis & Co will make for a long day.

Is it going to be Chase Edmonds or James Connor? I don’t know and I don’t care. The Titans front 7 is stingy and the Cardinals will be chucking.

Kenny G will see a healthy dose of Patrick Surtain Jr. who matches up with him quite well physically & the Broncos pass rush should make it hard for Daniel Jones to get the ball down field.

Andy Dalton will be at the helm this week and that Rams pass rush should make for a long day. I imagine Jalen Ramsey will travel with Robinson, if that’s the case, look for a 4/55 day for ARob.

The 49Ers know that Hockenson is the biggest threat they will face through the air this week. They have a pretty decent TE on their own squad and that 49ers defense should have some experience trying to shut him down. They will be ready and they will eliminate him from the game plan.