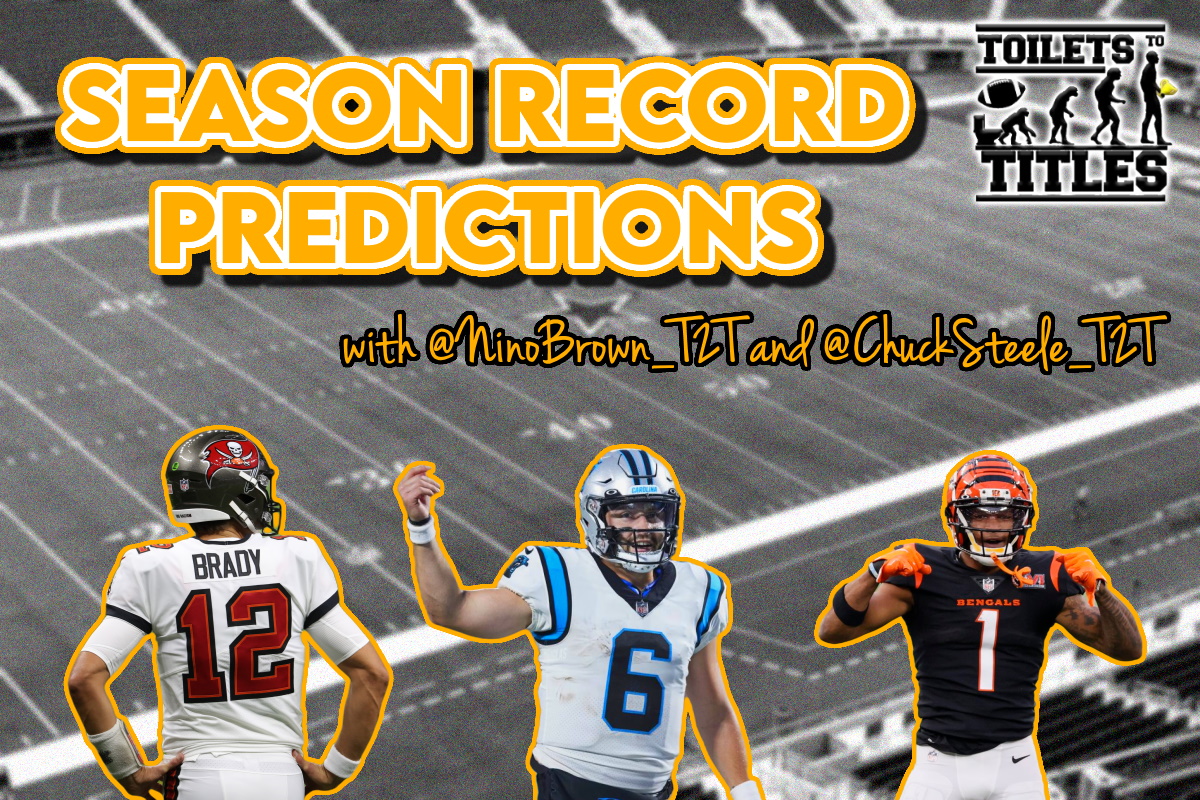 If you’re reading this, I want to personally congratulate you! It’s been a long off-season but we’re right around the corner of the start of the regular season. Many players have found new homes, particularly some star wide receivers, and since then we’ve all had many questions. Can Tyreek Hill find the same level of success with Tua at quarterback? How will the Chiefs fare as an offense without the speedster? Will A.J. Brown help Jalen Hurts take Philadelphia to the next level? And one I’m personally excited to see, can DaVante Adams re-establish chemistry with his old college teammate, Derek Carr? It’s not just that, Russell Wilson is the new leader for the Denver Broncos, who many think were only a quarterback away from truly contending.

After having back-to-back rookie sensations in Jamar Chase and Justin Jefferson, there will be plenty of ‘new guys’ out to prove to be the next great rookie. With several coaches joining new teams to try and build the next dynasty, the smells and yells are in the air…we’ve made it to football season! With the preseason now in the books, we are getting to see the teams’ identities start to take shape. With all the off-season chit-chat coming to end, the real chit-chat is just beginning. After all the “who they will sign ” and “who they should draft” talks are done, we start the real fun. When it comes to the regular season, I don’t care about the superlatives, there is only one true thing that I care about. WHO WILL WIN? The main goal of the sport comes down to this. With the wild offseason we had, I brought in my good friend, and a fellow Toilets to Titles member, Nino Brown, to help lay out some season predictions. Nino will be representing and breaking down the AFC, and I the NFC. Let’s take a look at who will win their divisions and make it into the playoffs! We will start with NFC.

NFC North: With Davante Adams now out of Green Bay, there are probably a few teams that think they can take the crown from Green Bay as division champions. No, not the Chicago Bears. However, the Minnesota Vikings are a team with laser focus lately. Superstar wideout Justin Jefferson has taken the league by storm in his 2 years since being drafted by the Vikings. Intending to air it out this season as a team, the Vikings are hoping to prove their dominance. Even the Lions could be a fun underdog team this year. Nicolas Cage says to hold your horses. Sorry, I mean Aaron Rodgers. He may have lost one of the best wideouts in the NFL, but also knows that he’s one of the best quarterbacks in the league and has made it happen before without Davante. With wideouts he already trusts, and two budding rookies to learn behind them, I still expect to see those Aaron Rodgers magic moments, maintaining the North with a record of 11-6. Minnesota will compete and make the playoffs at 10-7, securing the second wild card position.

NFC South: Tom Brady retired this offseason, giving hope to all the NFL that the all-time Super Bowl winningest quarterback is finally no longer giving teams gray hairs! ‘Just kidding’, says Tom Brady. With a short-lived retirement, Brady is back. And with that, so are the Buccaneers. Yes, the Panthers have added Baker Mayfield to the squad as the new starter, while also recently trading to get him a weapon in Laviska Shenault, but that doesn’t add up to a team with a strong defense or an offense that beats the likes of Brady, Mike Evans, Chris Godwin (who is recovering well and will play this year), and the re-emergence of Leonard Fournette. In a weak division, the Buccaneers will have no trouble sailing to not just a division title, but also claim the number one seed in the NFC at a record of 13-4.

NFC East: A.J. Brown was one of the many wide receivers to find a new home this year, and I’ve recently written about how the Philadelphia Eagles are my Dark Horse Offense this year. But is it enough to close the gap with the Dallas Cowboys? The Washington Commanders are now led by Carson Wentz, who finds himself back in the NFC East. There was a reason Philly wanted him out, and why he only lasted one year with the Colts. I’m expecting Wentz to only win five games this year for Washington. Maybe the New York Giants, now coached by Brian Daboll, will bring respect back to Big Blue and pull out another underdog story? They are going into the year healthy, with weapons at the wideout position and a locked and loaded Saquon Barkley. Dallas had a few key departures this off-season in Amari Cooper, Connor Williams, and Randy Gregory. Even so, this is no longer just an offensively led team. Last year the addition of Micah Parsons transformed this Dallas defense into a turnover machine, which they will need to help against a fire-powered Philly offense. With an NFC East sweep last year, the gap will close significantly by the rising Philadelphia Eagles. But the D in Dallas will help carry the team to match last year’s record at 12-5 being the first repeating NFC East champions since 2004. Philadelphia will make it into the playoffs as the first wildcard team, also at 12-5.

NFC West: This division is a tough one, having seen each team compete for the division over the last few years. We have the defending Super Bowl Champion LA Rams, who had a few departures at the wide receiver position losing Robert Woods and Odell Beckham Jr.. However, they did add a Red Zone threat in Allen Robinson, who will make the perfect compliment to Cooper Kupp. With their run game coming back to health the Rams are in a prime position to retain the NFC West title and make another run at the Super Bowl, but it won’t come easy. Arizona was a team that started the season red hot last year winning 10 of their first 12, before falling flat on their face. The addition of Hollywood Brown, Murray’s old college teammate, will add a big boost to an already explosive offense. Once DeAndre Hopkins returns from suspension, the Cardinals will give the Rams a run for the division. As for the 49ers, with a new face at quarterback in second-year player Trey Lance, I expect this team to have a lot of fun games with athletic playmakers. But growing pains are sure to be a holdback for a 49ers team that competed and advanced in last year’s playoffs. With Lance getting his first year starting at quarterback, it could be a step back for the 49ers offense. In losing their leader over the past several years, Russell Wilson, Seattle comes into this season as an unknown. One thing that is known, they have rather bad quarterbacks going into the year.

AFC North: The AFC North can pack a punch. You have the defending AFC Champions, a team most would not have expected to do what they did last year by reaching the Super Bowl. Lamar Jackson has a hunger, though he prefers to win a Super Bowl before signing a new contract. With both of these top quarterbacks ready to lead their team to battle, Nino gives the crown to Joe Burrow and the Bengals as King of the North! However, the Ravens will try to seek revenge in the playoffs as the number one wildcard team. “The AFC North will be a heavyweight bout, culminating in Week 18 when the Ravens travel to Cincinnati for what should be the crowning of the north champ! A healthy Lamar Jackson vs Joe ‘Cool’ Burrow, the ground and pound of Baltimore vs the high-powered Bengals offense…this will be for all the marbles and bragging rights! Unfortunately, a rebuilding Steelers team and a Browns team trapped in a whirlwind of headlines won’t be able to play with the big dawgs in ‘22’.”

AFC South: Last year the Indianapolis Colts had hits on their two second-round draft picks, grabbing both Jonathan Taylor and Michael Pittman. They proved to be a key cog in this machine that the Colts are trying to finetune. Can it be enough to overthrow the Tennessee Titans? With Matt Ryan in Indy, Nino thinks this can be a year the Titans are not so mighty, or the whole division for that matter. “The AFC South could be the new NFC South, turning out a below .500 playoff team. The Titans were a juggernaut last season but got exposed in the playoffs. With a lot of new moving pieces, the Indianapolis Colts should emerge as the victor of the AFC South. Pairing Michael Pittman with the best QB he’s had in his young career should be electric, not to mention the reigning rushing leader JT. Still some question marks in Indy but seven or eight wins could take the division.”

AFC East: No longer are the days where the Patriots rein. It’s the Buffalo Bills’ time to shine in the AFC East. Josh Allen has been playing in a different world, and this off-season the Bills extended Stefon Diggs to give Allen a playmaker for the foreseeable future. The Patriots aren’t necessarily trending up, and with the Miami Dolphins adding speedster Tyreek Hill to play with Jaylen Waddle and Tua Tagovailoa, can the Patriots fall even farther in the east? “It was a long and glorious ride but the dynasty in New England is over…and it ended abruptly. Given their coaching staff is in shambles and the offensive line can’t seem to block anyone, second-year QB Mac Jones could be in for a long season. With a ceiling of nine wins the Patriots might be looking up at the Bills & Fins in ‘22’.”

AFC West: Earlier in the year I wrote an article on what QB I feel will be the best in the West, now it’s time for Nino to give us his best team in the West! It’s one of the more fire-powered divisions in football. Probably the most competitive. Will one of the three teams be able to knock off the now Tyreek-less Chiefs? Or will they repeat as Division Champs? Let’s see what Nino thinks! “Although everyone loaded up in the AFC West, no team did so quite like the Chargers, bringing in Khalil Mack and JC Jackson to round out their D. And look for Justin Herbert to take that next step in his QB legacy. Bolt up for a dozen Ws.” You heard the man! Chargers win the division at 12-4, with the Denver Broncos having an identical record, taking the 2nd wildcard in the playoffs! This division is so lethal that Nino also has the Las Vegas Raiders sneaking in and taking the third and final wildcard.