Dynasty In and Outs – Tight Ends 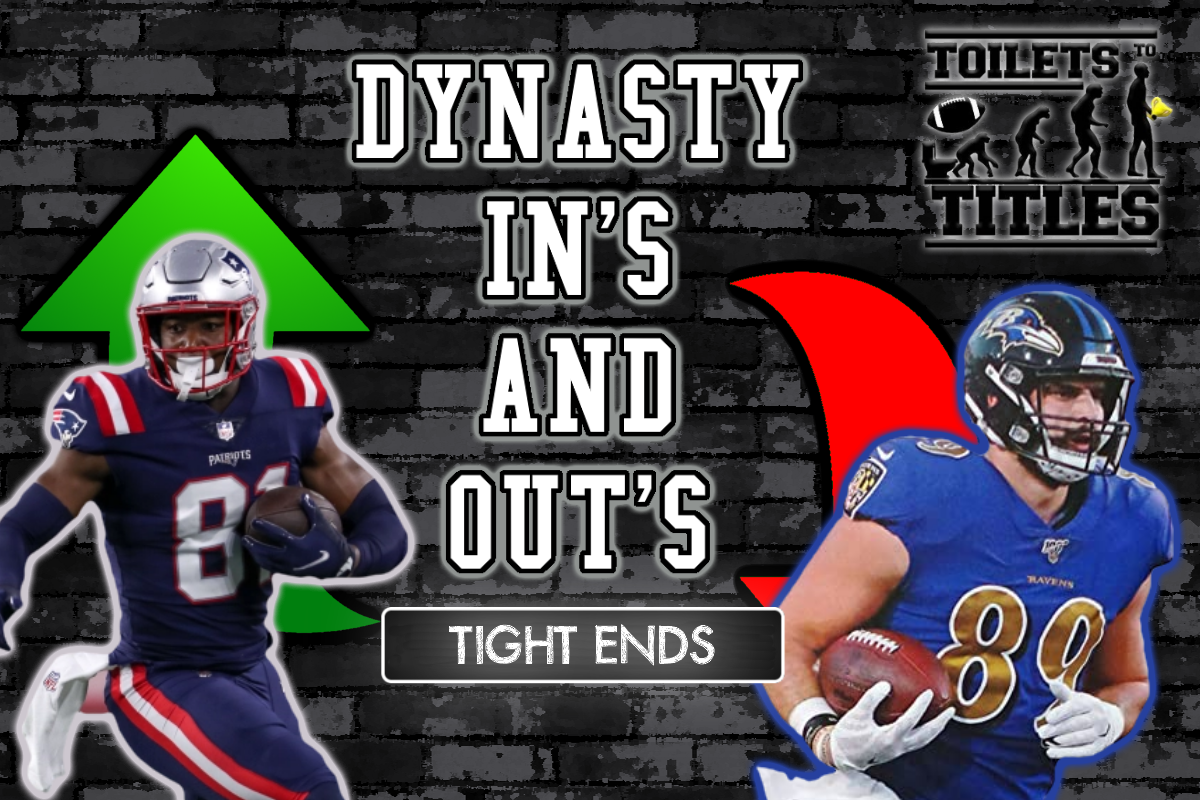 Welcome! It’s part four of Dynasty Ins and Outs, the final article in the series. “In’s” being players, I believe, will join their positions top-six in 2022 startups and “Outs” being players currently being drafted in the top-six of their position in dynasty startups, whom I think will fall out of that top twelve in 2022 offseason ADP.

I will be using the July 13th ADP  Superflex dynasty ADP from the fantasy site Sleeper for this exercise. They recently started providing their ADP on Twitter, freely available for anyone who wanted to use it. Given the sample size of the data, I don’t imagine that there is anything better available given the sample size and the mix of casual and hardcore players. We looked at Running backs in part one, then Wide Receivers in part two. Part three was Quarterbacks. Part four will go over the Tight End position.

In 2020, Jonnu finished as the TE 16 in PPR leagues. He ended the season with 41 catches out of 65 targets for a total of 448  receiving yards and 8 TD’s in 15 games. His July 13th SF dynasty sleeper ADP is TE16 going off the board at 139.8 overall, right in the middle of the 12th round.  Many people expected more from Jonnu in the 2020 season, but the targets were not there for him. Why the Titans didn’t utilise his skillset more, is beyond me. It did look like that breakout was going to happen in the first month of the season. Fortunately, 4for4 football, has a market share split tool to compare Jonnu’s first four games to the rest of his season.

Jonnu’s first four games of the 2020 season had him on pace to be the TE 2 overall in PPR and Standard. While that may have been driven by 5 TD’s the first four games, the market share tool shows that the other stats were also there during that period. He then averaged a measly 3.5 targets a game the rest of the season, but his ability didn’t disappear.

Enter the 2020 offseason, Jonnu became an unrestricted free agent, and the New England Patriots quickly pounced. They signed him to a four year, $50 million contract. Despite also signing Hunter Henry to a similar, though shorter, contract. It’s clear that Jonnu Smith was the priority signing.  Now, do I think he is going to the TE2 overall? No, although, a top-six finish is well within reach. I’m not concerned about the Henry signing because it’s arguable that Smith and Henry could be top two options in the Patriots passing game overall.

Jonnu has the physical tools and versatility to be that chess piece that Bill Belichick and Josh McDaniels love; 41.4% of Smith’s snaps came in the slot or out wide. With a depth chart at Wide Receiver that features Nelson Agholor, Kendrick Bourne, and Jakobi Meyers, that number might be even higher with the Patriots in 2021. The strength of this team is definitely at Te.  Which means, the game plan will be structured to take advantage of it.

Picking a TE in currently in the top six to drop out of the top twelve is tough, but hey, that’s the whole premise of the series. So, here we are.  The guy I’m saying is going to drop out is Baltimore Ravens TE, Mark Andrews.  He finished the 2020 season with 58 catches on 88 targets for 701 receiving yards and 7 TDs, resulting in a TE 6 finish. His July 13th Sleeper ADP is TE5 going off the board at 55.7, so the middle of the fifth round.

The reason, I think Andrews could drop out of the top twelve at TE in dynasty startups, is nothing to do with his talent. It’s because of the additional players Baltimore has added to its passing game and some of the younger players I feel are ready to step up.

Marquise Brown is a much-maligned player who showed real improvement in year two and is underrated by the fantasy community going into year three. Then, there are the additions of Rashod Batman in the first round of the NFL draft and Sammy Watkins as a free agent. People may laugh at the inclusion of Watkins as any threat to Andrews but he has been the best WR for the Ravens during training camp and is back under Greg Roman, where he had his best season. It wasn’t that long ago that his playoff run was a catalyst for the Chiefs getting to and winning the Superbowl.  Wide receiver guru Matt Harmon over at receptionperception.com has compared Bateman as a prospect to Justin Jefferson and Keenan Allen, so that tells you all you need to know about his talent.  Lastly, once the Ravens realise what they have in JK Dobbins, I think you will see a much-expanded role in the short passing game, taking further opportunities away from Andrews.

Even if the Ravens increase their passing volume, which I think is possible, I think his ceiling is what we saw last season with additional weapons on the team. In which case, players like TJ Hockenson, Noah Fant, Dallas Goedert, Irv Smith, Mike Gesicki and of course Jonnu will blow right by him in the TE rankings.

COVID, VACCINES, AND THE NFL – ENOUGH WITH THE “OTHERING”
Snake draft advice: Picking from the 1 or 2 spot