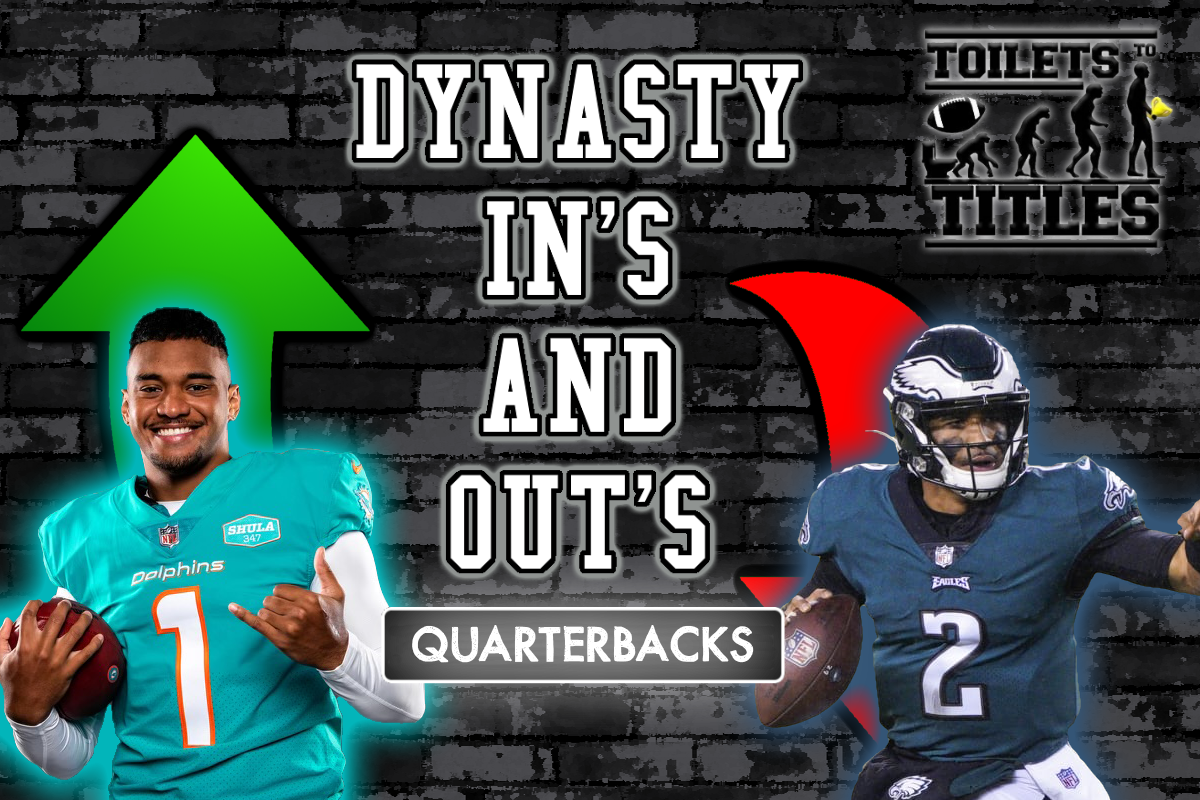 Welcome! It’s part three of Dynasty Ins and Outs. “In’s” being players, I believe, will join their positions top-six in 2022 start-ups and “Outs” being players currently being drafted in the top-six of their position in dynasty start-ups, whom I think will fall out of that top twelve in 2022 offseason ADP.

In each article, I will do one player for both categories.  To add to the degree of difficulty for the players entering the top six, I won’t be selecting any players currently in the top twelve based on the available ADP

I will be using the July 13th ADP  Superflex dynasty ADP from the fantasy site Sleeper for this exercise. They recently started providing their ADP on Twitter, freely available for anyone who wanted to use it. Given the sample size of the data, I don’t imagine that there is anything better available given the sample size and the mix of both casual and hardcore players. We looked at Running backs in part one, then Wide Receivers in part two. This week we will be looking at Quarterbacks.

Then that Hip injury happened, and the generational prospect was no longer considered the best QB in his draft class, which was fair, considering the season Joe Burrow had at LSU. The Dolphins still took Tua 5th overall. There was talk and chatter that he could sit out the whole year with the hip injury, however that didn’t prove to be the case. Tua played in ten games, starting nine of those while throwing for 1,814 yards and 11 touchdowns and 5 interceptions with a completion rate of 64.1% with 6.3 yards per pass attempt (YPA). The 6.3 YPA being the alarming stat as Tua finished 30th out of qualified quarterbacks.

In July, Tua’s Sleeper ADP was QB16 drafted at 61.1 overall. Getting into the top six Quarterbacks come 2022 startup season will be a tall task, but I’m going to try to make the case. Joe Burrow is currently the QB9 in the Sleep ADP going 19th overall off the board.  Burrow threw for 2,688 yards and 13 Touchdowns, and 5 interceptions with a 6.7 YPA in 10 starts. The main difference between the two? Burrow attempted 114 more passes! If Tua threw the ball 114 more times, his stats align quite closely to Burrows, and he would have thrown more TD’s. That’s despite coming off the devastating hip injury, not getting near as many practice reps as Burrow got, getting pulled for Fitzpatrick and the talent surrounding him.

Going into the 2021 season, Tua will get all the reps in practice the starter typically gets. The Dolphins signed Will Fuller and drafted Jayden Waddle. That’s two premium investments into the Wide Receiver position. More importantly, Will Fuller and Jaylen Waddle are players that create separation and get open. They are not jump-ball contested-catch WR’s like Devante Parker and Preston Williams. These additions will be massive for Tua, a player who can go through his progressions and make the right throw. Let’s nor overlook Albert Wilson coming back after sitting out the 2020 season due to COVID19, another player who creates separation.

The departure of Ryan Fitzpatrick will mean not more looking over his shoulder, along with a year learning the offence, as well as being a year further removed from his hip injury, all these factors will be huge for Tua. I anticipate a massive jump for his ADP heading into the 2022 startup season.  Buy the dip and get an elite QB on your roster.

This feels like cheating as Jalen Hurts is going exactly as QB12 in the July Superflex sleeper ADP. 45.7 overall. He finished the season throwing for 1,061 yards, 6 Touchdowns, 4 interceptions and 7.2 YPA.  With Jalen we have to include the rushing stats. He rushed for 354 yards from 63 attempts, an average of 5.6 yards per rush with 3 touchdowns.

This will be shorter than some of my other arguments. I just don’t believe in Jalen Hurts. From all the rumours we’ve heard throughout the offseason, it doesn’t sound like the Eagles do either. People will point to Lamar Jackson’s success as a rookie as the reason Jalen can play well and be the Konami code Quarterback people anticipate him being.  Jackson, however, had a completion percentage of 58%, not fantastic by any means but far and beyond the 52% Hurts has as a rookie. Jackson’s ability to rush the football is also worlds beyond Jalen’s. He is just a more special athlete.

Then there are constant rumours we heard throughout the offseason. The Eagles were high on Zack Wilson and they have also been mentioned in the Deshaun Watson trade rumours. My last concern with Jalen Hurts is that the Eagles with two first-round draft picks in 2022. They have the draft capital in next year’s NFL draft to go and get themselves another quarterback. Meaning Hurts leash is very short. He has to succeed this year to assure himself the starting role on the Eagles in the future.

Come the 2022 dynasty start-up season; Hurts might be a backup going well into the double-digit rounds. When it comes to investing in a dynasty QB, I would rather spend the capital on a young QB with a longer leash than Hurts. That includes the Tua QB16 as mentioned earlier, Zach Wilson QB18 picked second overall just beginning his rookie contract, and Baker Mayfield QB 19, who is about to sign a lucrative extension.   If I were drafting a win-now team, I would still prefer Ryan Tannehill QB17 and Matthew Stafford QB15 over Hurts. Despite their age, two players who still have three or four good years left at a minimum.  Lastly, if I were taking a productive struggle approach to my start-up, I would take Deshaun Watson over Hurts. If you can turn Hurts into any of these players, I implore you to make that move now before he’s the Eagles back up next year.

Snake draft advice: Picking 11 or 12
Scheppstradamus and a look into the near future…Super Bowl Winner & NFL Awards