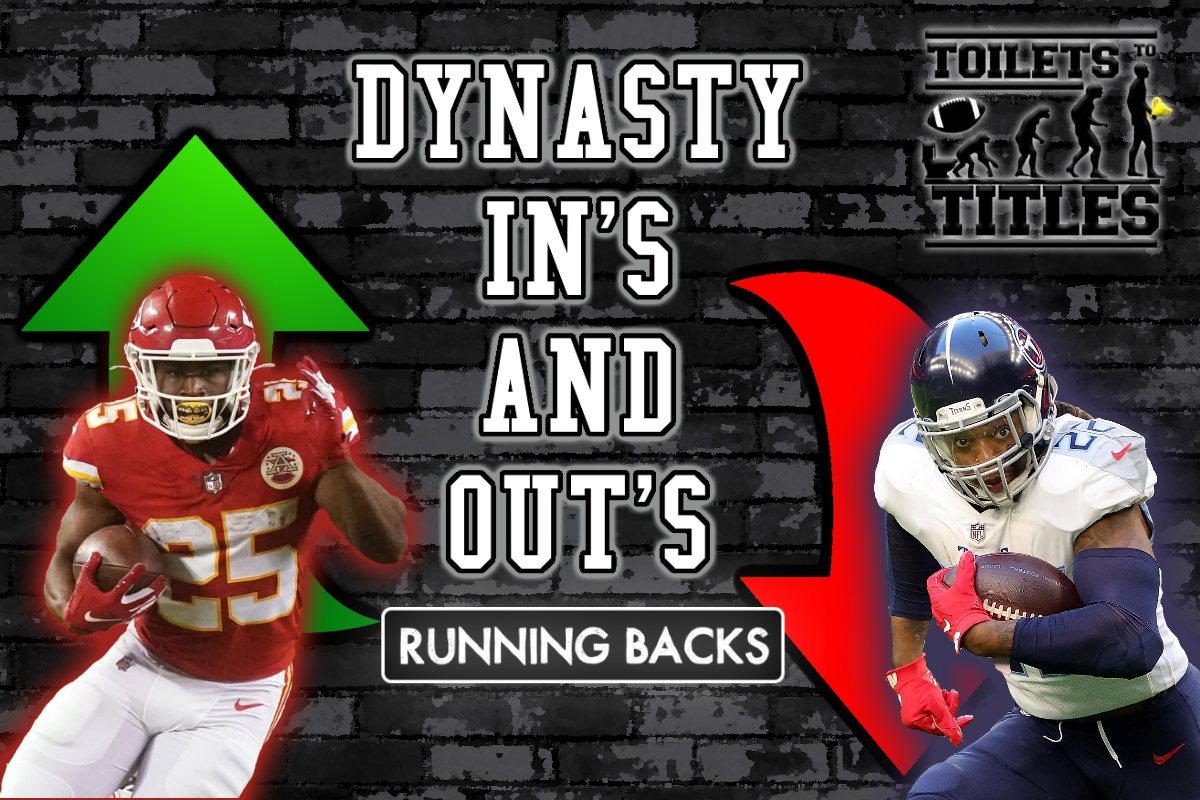 Welcome! This is a new series of Dynasty Ins and Outs. “In’s” being players, I believe, will join their positions top-six in 2022 start-ups and “Outs” being players currently being drafted in the top-six of their position in dynasty start-ups, whom I think will fall out of that top twelve in 2022 offseason ADP

In each article I will do one player in both of these categories and to add to the degree of difficulty for the players entering the top six, I won’t be selecting any players currently in the top twelve based on the available ADP.

I will be using the most recently provided Superflex dynasty ADP from the fantasy site Sleeper for the exercise. They recently started providing their ADP on Twitter, freely available for anyone who wanted to use it. Given the sample size of the data, I couldn’t imagine that there is anything better available. Today we’ll be starting with the running backs.

Clyde Edwards-Helaire catapulted up the draft boards last offseason when the Kansas City Chiefs picked him with the final selection of round one in the NFL draft.  He finished the season with  803 rushing yards on 181 attempts for a healthy 4.4 yards per attempt and 36 receptions on 54 targets 297 yards at 8.3 yards per reception. Things started with a bang against Houston, 25 carries for 138 yards and a touchdown. All the experts touting him as the dynasty 1.01 and top six redraft selection celebrated in victory, Alas, this was merely a battle, and the war was not over regarding CEH’s fantasy success.  He was RB 11 overall in PPR leagues through the first six weeks of the season. Then the Chiefs O-line got hit with injuries, CEH struggled in short-yardage and passing blocking and found himself often taken out of the game for Darrel Williams. His production fell off a cliff, and he finished as the RB 22 overall in PPR leagues.

The hurt and disappointment from the previous year have dynasty owners letting CEH fall to RB15 overall (33.4) per Sleeper’s July ADP. All whilst his contemporaries D’Andre Swift and pre-injury Cam Akers were coming off the board at RB 9 (22.0) and RB 8 (18.4), respectively. Let us compare with the assistance from the good people over at https://stathead.com/football/

Why am I willing to go even further and say that CEH will be a top 6 running back in ADP come the 2022 offseason?  The first reason is that a more normal offseason will give CEH a chance to work on his biggest weakness, pass blocking. The second reason is the revamped Chiefs offensive line headlined by the signing of Joe Thuney and trade for Orlando Brown Jr. With the upgrades made along the line, you will see an improved CEH in both short-yardage and goal-line situations. The third reason is positive touchdown regression. CEH finished as an RB2 with only five total touchdowns. Regression to the mean would see CEH finish with 8 TDs. That alone would see him increase several spots in the overall RB finish. Lastly, he plays on the Kansas City Chiefs, the best offense in the NFL! The opportunities for fantasy points will be many on a team like the chiefs that live in the Red Zone.  Go and buy CEH for a discount whilst you can.

Derrick Henry is a force to be reckoned with, a running back the same size as the defensive ends he routinely runs over. He finished 2020 as the RB3 overall in full PPR leagues with 2027 rushing yards on 378 attempts at a clip of 5.4 yards per attempt, 17 rushing touchdowns along with 19 receptions for 114 yards.

Per Sleeper’s July ADP, he is currently being drafted as the RB6 (13.2) overall in full PPR leagues. I contend that this is much too high.  There are multiple signs that Henry’s value could plummet by the time the 2021 season ends. Even if, as I suspect he will, he remains a productive player

He rushed for over 2000 yards and still only finished as the RB3 overall in PPR.  The Titans have the ever-improving AJ Brown and the addition of a shiny new Julio Jones. What if Titans decide they need to pass the ball just a little bit more to rise to a real Super Bowl contender? It wouldn’t surprise me, given they might be a little more inclined to take the reins off Ryan Tannehill after two years of insane efficiency and let him throw the ball more often.

What if the Titans wanted to ensure their workhorse stays fresher for the playoffs? And they decided to mix in a little more of last year’s much-hyped third-round pick Darryton Evans? Third round draft capital for a running back is legitimate draft capital, so this wouldn’t shock me either. I’m sure the Titans want to ensure Henry remains productive until at least the 2023 offseason, where they could waive him with only three million in dead cap space.

Imagine these things come to fruition. Is Henry still going to be a stud for the 2021 season? Of course, the guy is the next evolution of humankind. However, If these things come to fruition, I see a world where Henry’s 378 carries this season drop down to around 300.  The touchdowns drop from 17 to 12-13 range, and the yards per attempt drops to 5.1. Suddenly, our 2020 RB3 overall is firmly in the back end of the RB1 conversation as the 2021 season finishes. The 2022 offseason arrives, and he’s heading into his age 28 season. He isn’t a player you want to be drafting in the top 12 of his position or the first two rounds of your dynasty start-up.  You want those players you draft early to have value insulation. That is not something a 28-year-old running back will have, regardless of how he is performing.  Half the league won’t be interested in acquiring him, which hurts his trade value. I’m confident that come 2022 start-up season, Henry won’t be drafted as a top 12 running back.

What should you do with this information now? If you are not a contender, you should be looking to move Derrick Henry ASAP. If you are a sure-fire contender, a buying opportunity will present itself, but that window hasn’t opened just yet.