COVID, VACCINES, AND THE NFL – ENOUGH WITH THE “OTHERING” 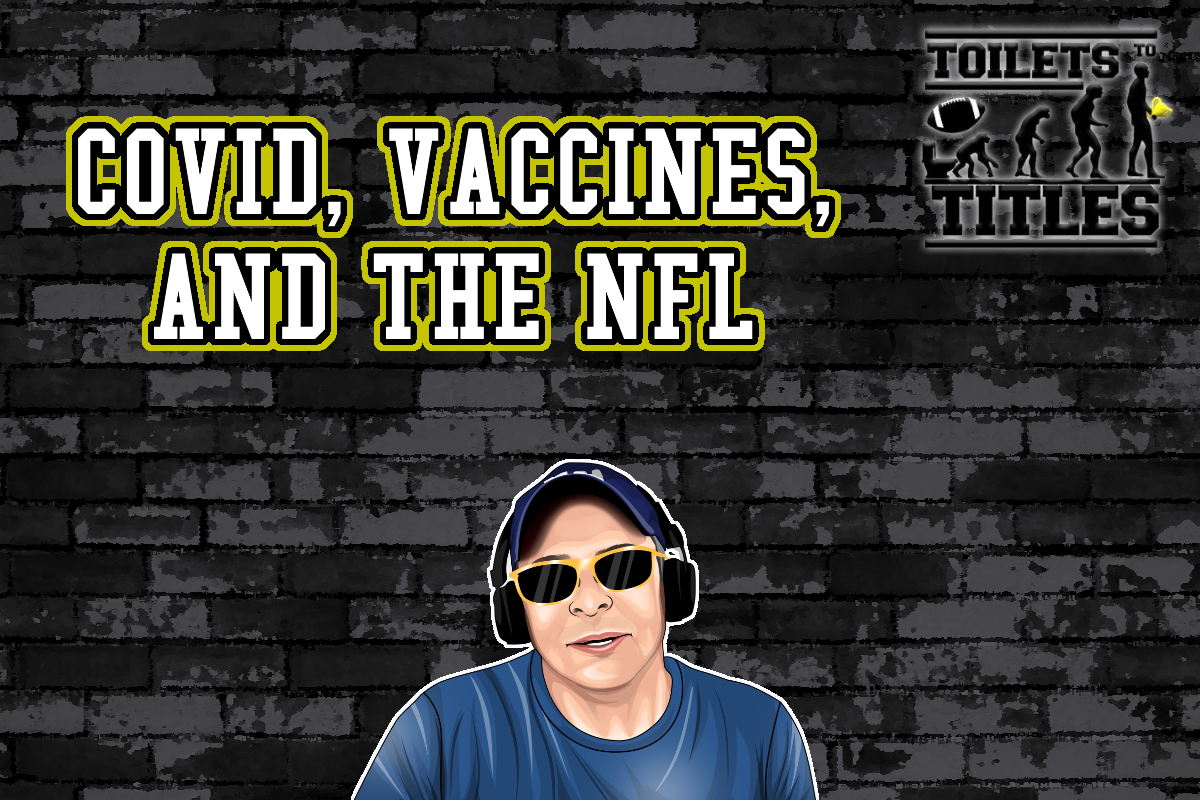 (This an opinion piece, my views are strictly my own, and it is not in any way intended to encourage or discourage people from taking or refraining from the COVID vaccine but rather to point out how we are being encouraged to treat each other)

I took the COVID vaccine, I am grateful that a vaccine(s) exists, and I completely disagree with how the NFL, the media, and much of society are treating NFL players and the millions (if not tens of million) of people in the U.S. alone who do not want to take the COVID vaccine (or who have serious concerns about it).  Those more notable players (off the top of my head) are Cole Beasley, DeAndre Hopkins, and Kurt Cousins.  There are probably others that I am just not aware of (in fact I just saw a headline today regarding Cousins but I did not read the entire article), but that is fine because I have seen enough.

The attempt to “other” these people (and they are people just like you and me) is unacceptable.  “Othering,” that is making them out to be ignorant, conspiracy theorists, paranoid, stupid, “not following science,” way on the fringes of normal behavior – anything to make them appear to be other than “normal.”  When, in fact, we know concerns about the COVID vaccines are held by many throughout society in many nations and these NFL players are just a sampling of the number of people from every different facet of society who have concerns for one reason or another.  Trying to publicly shame and “other” those who have serious concerns, is not going to alleviate those concerns.

Such societal pressure may produce the desired results – people giving in and taking the shot even though they do not agree with it – but you should not be proud about that result because you may be the one who is wrong.  I do know quite a few people who have refused the vaccination and not one of them – not one – has questioned my decision to get my family and I vaccinated.  All of the questioning has been one-sided, from my perspective, from those who chose to get vaccinated against those who don’t want the vaccine.

I am vaccinated as is my entire immediate family.  The age groupings range from teens to family members well into their retirement years.  It felt like it was the best thing to do, but some, who were not elderly, were not exactly the first ones in line for the vaccine either.  Some wanted to see how a wide pool of other people fared with it first, especially, if there were any very bad immediate side effects.  After a while, when it seemed as if everything was okay, those who had waited, got themselves the vaccine and had their teens vaccinated as well.

Why the wait?  It was because of the uncertainty surrounding COVID.  But, but, but…science!!  Yes, I absolutely 100% believe in science but I will never ever, ever, never, never ever, never, never, never, (do I make myself clear) believe in politicized science.  And that, in my opinion, is much of what we are facing with all of this.  Not that COVID is not dangerous, not that the vaccines are dangerous or work or do not work, but rather that so much, if not everything, regarding COVID has been politicized (as has pretty much everything these days)  Seems like more and more every single year until everything has been infected with politics.  And besides, science is often unsettled and changes or updates as more and better data and information materializes.  It wasn’t all that long ago when black holes were thought impossible.  Now, we know they exist.

I remember, back around the January to March 2020 time frame, when we were being told by leading experts to not bother with masks because masks would not prevent you from getting something like COVID.  It did not make any sense to me as I recall thinking at that time, “Well, it can’t hurt to wear a mask and I imagine it’s better than nothing.”  Was I being paranoid by questioning the top “science” people up on my TV screen at that time?  Besides, everyone in Wuhan and the rest of China were wearing masks.  Then it was, I guess April 2020, when leading experts told us to wear masks everywhere and at all times, pretty much.  Then we went through the rest of the year where anyone who did not wear masks or states who had less rigorous mask requirements were the notorious “super-spreaders.”  Whom were to blame for everything.  While people from the states with the more rigorous mask rules and longer period of mandated work-location shutdowns, hightailed it to states with the less rigorous ones (if they had a second home or other place to stay in those states) which usually were in the warmer climate but where the apparent “super-spreaders” resided.

I remember leading politicians in that same January to March 2020-time frame touting in front of every camera and reporter that they could find to not be paranoid and go out and live their lives like normal; that everything was fine.  That did not make any sense to me at that time and I thought, COVID was not being taken seriously enough.  Was I a conspiracy theorist to question our elected leaders?

I remember when we were told that we would A) never have a vaccine by early 2021 and B) that the efficacy and possible short and long term side effects of such a vaccine approved so quickly should be questioned because it would not have gone through the normal years of testing and validation that would normally be required.  Those were legitimate points, concerns, and questions and yet I still wanted the option for a vaccine, and for individuals to have the opportunity to weigh those risks for themselves.  Even the more serious decision, of whether or not, to have their children vaccinated.  I am happy that what I wanted and what I thought best came to pass and there is a vaccine(s) and people get to choose.  Again, people have the right to choose.

I remember when we were being fed stories about how the regime in Beijing was upfront and honest to WHO (World Health Organization) about everything COVID, and I’d say to myself “Are you kidding me?”  We were even fed stories about how “China was doing it right” and how stupid and backwards our society was to not do what they were doing, and lo and behold China got to something like 0 deaths from COVID at one point.  Are you kidding us?  Or was that propaganda to drive a political point.  I think I know the answer to that.

We don’t even know how this virus came about.  That should scare you.  What’s even scarier is that it may have been (and let’s face it, probably was) created in a lab.  For those of you who, like me, thought it wise to wear masks, social distance, and wanted a vaccine.  Why would you not have concerns about a vaccine created to prevent a virus that was most likely created in a lab and created for purposes we have not found out (or more likely have just not been told)?

Who, exactly, is “crazy” in this situation?  Well, actually nobody in my opinion because there are so many questions and there should be so many questions.  Get the vaccine like I did, if you want, but I’m not with you, if you think that those not feeling comfortable injecting themselves with a vaccine that has been rushed and pushed on us are somehow conspiracy theorists; when we’ve been told one thing, one day and then the exact opposite the next day for over a year by politicians and organizations who have their own agendas.

I don’t blame you, the everyday person, the everyday fan.  We’re fed nonsense, everyday, and much of it is opinion and politics dressed up as journalism, facts, and truth.  We’re made to feel like we’re on “Team Good Guy” or “Team Science” or “Team Well-Intentioned” (regardless of the subject) and that, whether directly stated or implied, the “others” are “Team Bad” or “Team Anti-science” or “Team Bad-Intentions.”  But it’s all nonsense.

You’re being taught that people, either family and friends, you’ve known for a while or who have even had an incredibly positive influence on you throughout all or much of your life, are crazy for questioning the “conventional wisdom” of the day.  Which could very well not be the conventional wisdom of tomorrow.  But instead we’re then supposed to forget the previous conventional wisdom and not hold it up in comparison to today’s conventional wisdom.  While the “expert,” politician, and media on TV now assures me that this is what we must now all believe.  So you’re an idiot if you’re wondering “What changed so quickly?”  Even though you and I talk all the time about everything and I always respected your opinion, but now I’m supposed to think that you’re misinformed, at best, and some sort of science-denier, ala Inherit the Wind, at worst.

It’s not wise to force people to take this vaccine but here’s a legitimate question that should scare you when you think about it: Does forcing a player to take the vaccine end with the player?  Remember my question earlier in this piece,  “If you’re vaccinated, then why are you so concerned about others who don’t want it?”  Okay, the player has been forced to take the shot.  All are happy now, right?  You’re vaccinated, the player is vaccinated.  But what about his teens?  He has the vaccine, but he’s exposed to others like his unvaccinated teens who could get the virus.  Or, are you going to force him to get his kids vaccinated too?  Are you going to support NFL teams, the media, advertisers if they want to bring societal pressure on the player to force the vaccine on his teens when he doesn’t feel comfortable with it?  I sure as heck won’t.
Don’t buy into the paranoia, and no, people who refuse the vaccine aren’t crazy.  Who is crazy, and irresponsible, are those in positions of power trying to pit us against one another.  Don’t buy into it.