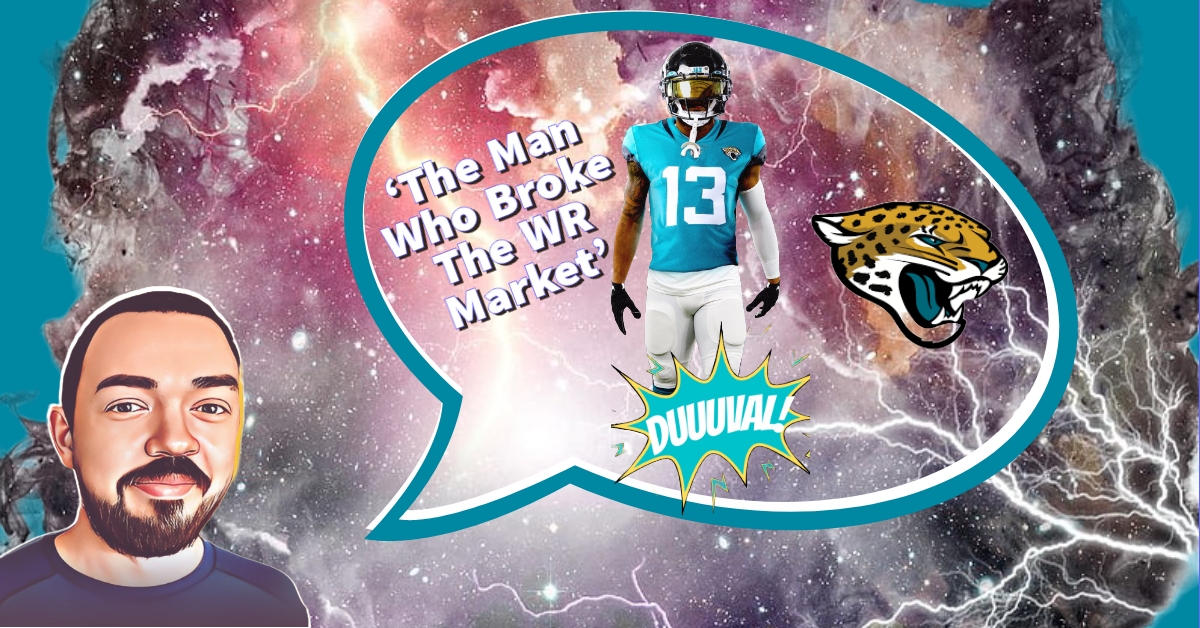 The $84 million dollar man. The man who broke the WR market. The man who initiated all of the WR movement turned chaos, this offseason. What gets lost in all of that, is a player coming off his best season in his 4 year career and poised to be the top target for the Jaguars.  Could this be the key to unlocking the ascension of Trevor Lawrence? All the way to the heights that were expected when he was declared a generational talent and drafted #1 overall, just one year ago. After Kirk’s first two seasons, he was gradually more integrated into the offense, when he was healthy.  He took a step back in targets in 2020, with the arrival of DeAndre Hopkins, going from 108 targets in 2019 to 78 in 2020, even though he took a step forward in TDs, going from 3 to 6. 2021 was his true breakout year as he rose to the team’s #2 target. As DeAndre Hopkins battled injuries, Kirk stepped up alongside Zach Ertz, to average 12.7 PPR PPG without Hopkins in the lineup.  He additionally averaged 11.6 PPR PPG, with Hopkins in the lineup, on 103 targets. He was able to earn those 103 targets in an offense containing Chase Edmonds, Zach Ertz, AJ Green, DeAndre Hopkins and James Conner.

Kirk leaves the desert and moves to a Jacksonville offense to largely work out of the slot with Zay Jones and Marvin Jones lining up as the outside receivers and Travis Etienne being the primary pass catching running back. He will see an increase in targets as his 74% catch rate in 2021, and 66% for his career, will be music to Trevor Lawrence’s ears, as he manned an offense last year plagued by drops and lack of separation from his receivers. I am predicting a 15% increase in targets going to an offense that will likely throw the ball 600 times again. Also, I am projecting Trevor Lawrence to go from, 59.6% completion to 65% this year, as he learns from better coaching and has been surrounded by weapons like Kirk and Etienne. Kirk can be the safety valve for Lawrence behind an offensive line that had Lawrence running for his life much of the 2021 season and while they added Brandon Scherff; they largely stood pat. Doug Pederson will preach patience which will lead to many short area targets for Kirk, who while not a big threat after the catch evidenced by his 3.0 YAC last year, will likely rack up the catches and become a solid WR2 option in all PPR/ 0.5 PPR formats. The addition of Zay Jones, will likely stretch out the defense, as evidenced by his 14 ADOT, last year.  Something the Jaguars sorely needed last year, as Lawrence was throwing the ball into tight windows which his talents allowed, but also contributed to his 17 INTs.

So while the consensus seems to be that he isn’t worth $84 million, the question remains, will he be worth his ADP? He is currently being drafted as WR43 and 100th overall, per NFC ADP. This is a steal because he will likely receive north of 120 targets, as he replaces Marvin Jones as the teams top target and should expand and flourish, in the role the Jaguars have been trying to force Laviska Shenault to play for the past two years. Kirk has shown success, both, with the alpha dog of DeAndre Hopkins drawing away coverage and without him. I believe a lot of the fading of Kirk in fantasy circles is both a lack of trust in the Jaguars as well as a knee jerk reaction to his contract. He may have been overpaid but he should still produce from a fantasy perspective. His involvement in the offense means that he should be a WR2 or WR3 that likely won’t suffer from the ups and downs of other WR2 or WR3’s.  Who are the second options on their own team and will be boom or bust. He will be an anchor of production that will see improvement in statistics over last year. Lawrence made receivers such as Laquon Treadwell fantasy viable last year.

The receivers being drafted in a similar range as Kirk are players like, Robert Woods, coming off an ACL injury at age 30, Brandon Aiyuk, who spent most of last season in the Shanahan doghouse, and Tyler Lockett, who will be catching passes from Drew Lock. I would target Kirk 15 picks earlier in the range of 85-90 as your WR3. This will give you a positional advantage in 3 receiver leagues as I believe Kirk will be a top 24 PPR receiver. The value also allows you to target a top 5 QB and top 5 TE as you know you have a sleeper WR later in the draft. He may never live up to his $84 million contract but he may win you a fantasy championship, if you cash in on the value; while others are fading players for reasons other than ability and metrics.  Buy the dip and win championships. I believe Christian Kirk will be this year’s Hunter Renfrow.