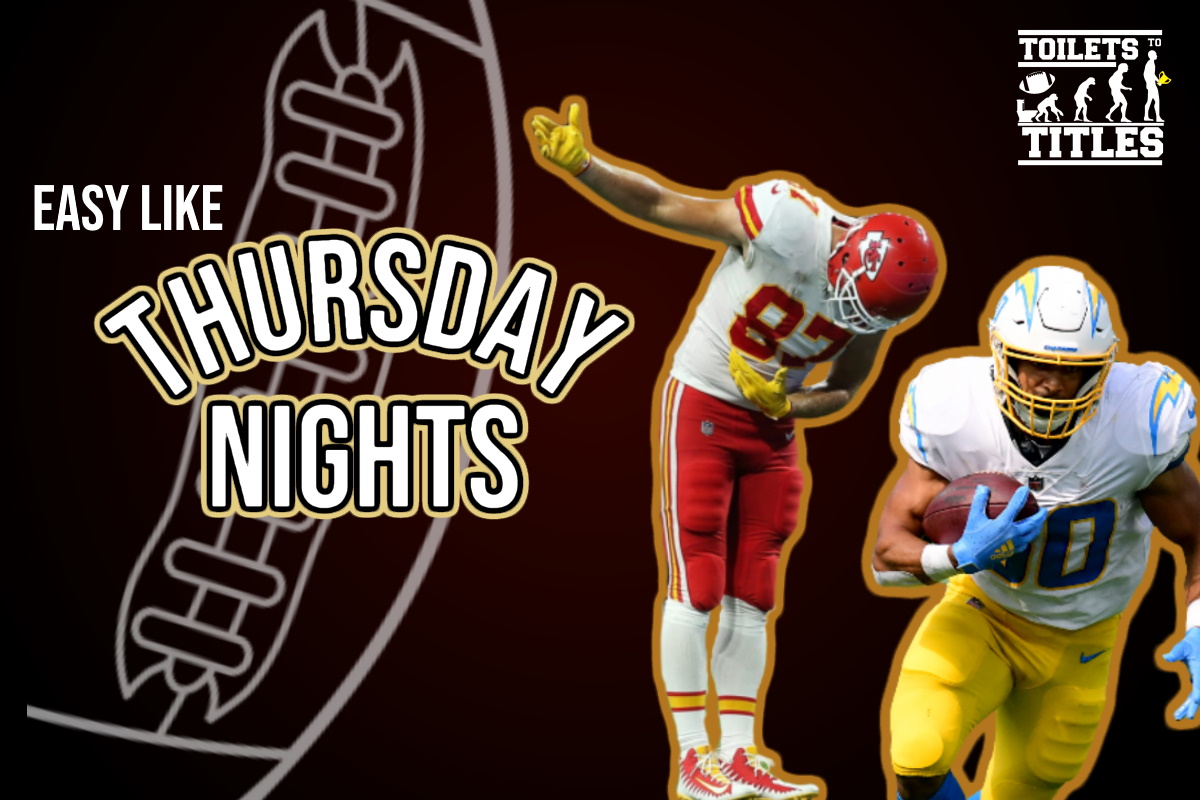 Welcome to the first edition of “Easy Like Thursday Nights” where the Toilets to Titles team will give you a fresh look at the upcoming Thursday Night match-up from the DFS (Draft Kings/Fanduel) perspective.

This week’s match-up should provide no shortage of fireworks as two of the top offenses in the NFL get together for a monster divisional match-up as the LA Chargers host the KC Chiefs.

Obviously from a fantasy perspective, the Chiefs’ week 1 performance and more specifically Patrick Mahomes’ performance are top of mind. In his first chance to prove that Tyreek Hill was not the key to the Chiefs’ past success, Mahomes went into Arizona and lit them on fire leading the Chiefs to 44 points while throwing for 5 touchdowns in the process.

The week 2 question for the Chiefs, fantasy-wise, is who is going to repeat their week 1 performance. Travis Kelce, we have to believe is going to be consistent all year long as the pure #1 target for Mahomes this year. I love Kelce in this week 2 match-up and he will lead my single-game Draft Kings lineup in the Captain spot. I can’t pass up Mahomes either, but I don’t want to pay his inflated “Captain spot” salary so I will put him in one of my regular lineup slots.

The receivers and RBs for the Chiefs make or break this single-game lineup. In addition to Kelce, Smith-Schuster, MVS, and M. Hardman all played an effective role last week for KC. Additionally, both, CEH and McKinnon found carries, catches, and the endzone times two in CEH’s case. I am going to go the cheap route for my final KC player and hope that Jerick McKinnon can turn the 7 touches he had last week into a TD, resulting in 10 fantasy points this week. One stat worth mentioning from week 1 is that Helaire only had 3 more touches than McKinnon yet costs $6k more on Draft Kings this week ($8,600/$2,600 respectively).

The Chargers also looked impressive in week 1 against the Raiders despite losing Keenan Allen to an injury. Allen has already been ruled out for Thursday night; so the question becomes who will get all those targets? The surprise of the week for the Chargers offensively was the performance of DeAndre Carter who went for 3/64/1 TD stepping in as the #3 WR once Allen left the game. Without Allen, both Carter and Joshua Palmer should be very involved in a game where it is expected that the Chargers will have to score potentially 30 + to win. Austin Ekeler is also due to pick up some of Keenan Allen’s targets.  Ekeler had 4 receptions on 4 targets to go along with his 14 carries. He didn’t get in the endzone in week 1 which leads me to believe that he will right that fantasy wrong in week 2! Lastly, backup tight end, Donald Parham JR, has already been declared out for Thursday due to a hamstring injury. Starting tight end, Gerald Everett, went for 3/54/1 in week 1 and should be on his way to even more usage with his back-up inactive and carries only a $4,800 salary on Draft Kings this week.