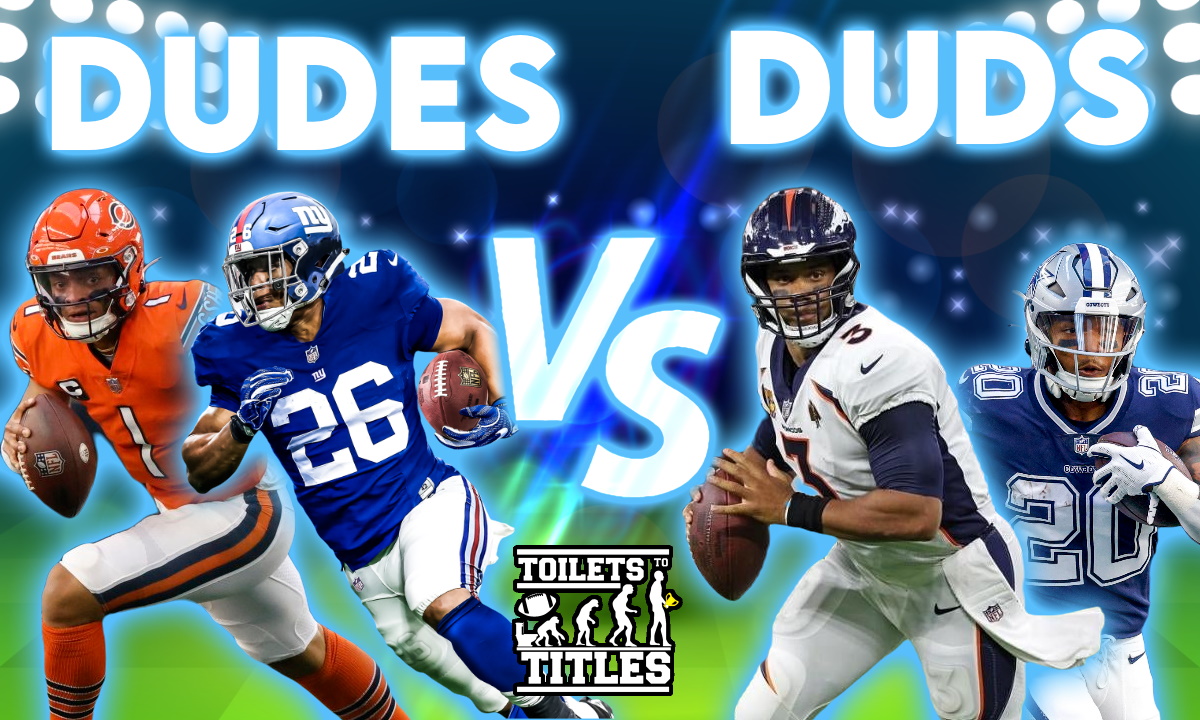 Justin Fields has now been a dude 3 weeks in a row and rightfully so. Fields on turf, indoors against a defense that is allowing an average of 289 yards through the air per game (2nd worst in the league)? Sign me up!!

Another game indoors and on turf…Dak had his ups and downs last week against the Green Bay Packers but it was to be expected. I was impressed with Dak’s ability to keep chucking even after a few interceptions due to his receivers not running their routes correctly. I expect a big week from Dak and the Cowboys offense against a Vikings team that has not played opposing QBs well.

When we get to the duds section, you will see me discuss a player who is a candidate for dud of the year…Barkley on the other hand is in the running for dude of the year. Quon is absolutely balling and is the face of a resurging Giants team. The Lions play the run poorly and Barkley will have big holes to run through this week.

Last week, the Ravens showed they believed in Drake by giving him 24 carries and Kenyan responded by delivering 93 yards on the ground and 2 touchdowns. The Carolina Panthers defense is allowing 24 points per game to opposing running backs and this week Kenyan Drake will be the beneficiary.

Besides a few route running blunders in week 10, Lamb had an exceptional outing against a Packers defense that is strong against the pass while playing in very cold conditions at Lambeau field. He’ll be indoors this week and he’ll be facing a Vikings defense that is giving up an average of 32 points weekly to opposing wide receivers this season.

Justin Jefferson will get his, I’m sure, but the #2 CB in Dallas has been pretty abysmal since Jourdan Lewis went down with a season ending injury. I expect Thielen to end the day with about 6-8 receptions for 70-90 yards and a touchdown.

Prior to this past week’s match-up, Dulcich has been coming on strong. I expect a bounce back performance for Greg when he faces the Raiders who are allowing an average of 12 points per game to opposing tight ends.

I’m stacking Mooney with Fields this week. I’m expecting fireworks from both of these players and would put my money down on this week being the most productive of Mooney’s 2022 season.

This one is more about Russ and less about the Raiders defense. As a person who believed Russ was going to cook in Denver with Jeudy and Sutton to throw to, I have been extremely disappointed with his production. Russ stinks and he is in the running for Dud of the year.

This depends on whether or not Murray plays. If Murray doesn’t play, clearly you are also sitting his back-up. Murray just hasn’t been the reliable fantasy asset we believe he’d be this season and the 49ers have his number. My confidence level is low here and I’m finding another option at QB if I can.

There are 2 factors that are leading me to believe Pollard will be a dud this week. The 1st one being that Ezekiel Elliott should be back and he’ll eat into some of Pollard’s touches. The 2nd being that the Vikings play the run well and have allowed the 6th fewest points to RBs through the first 10 weeks of the season.

The Lions rushing attack has been hard to predict since Swift returned from injury. Swift touched the ball 5 times in week 9 and 7 times in week 10. I expect Swift’s workload to increase this week but I also expect him to have tough sledding against a strong Giants rushing defense that has been playing lights out since the return of Leonard Williams.

AJ Brown has pretty strong overall numbers but if you look at his game by game production it has been a bit inconsistent. Brown has had a few monster games, a few average games and a few below average games. AJ has not been match-up proof. The Colts are only giving up 19 fantasy points per game to opposing WRs which is the 2nd best in the league. I expect a below average week from Brown.

Garrett Wilson totaled 115 yards on 6 receptions last time he faced the Patriots and scored the 2nd most points (17) a wide receiver has scored against the Patriots this season. I think there will be a different outcome this week. The Patriots have defended the pass well and Mr. Wilson will be a focal point for Belichick and the Patriots defense this week.

Tyler Higbee is coming off of his 2nd best outing of the season, but don’t let that distract you from the fact that he threw up back to back to back dud performances prior to week 10. This week, Tyler is heading to New Orleans and he’ll face a Saints defense that just doesn’t allow opposing tight ends to get anything done.

Foreman has been an absolute godsend for fantasy managers since taking over the starting role after Christian Mccaffrey’s departure. That being said, the bulk of the damage done by Foreman was against the Falcons in both match-ups they’ve had with the Panthers in week 8 and week 10. This week, he’ll be heading to what I expect to be a late season atmosphere in Baltimore. The Ravens are clicking, their run defense has been bolstered with the addition of Roquan Smith, and they’ll shut down Foreman this week.