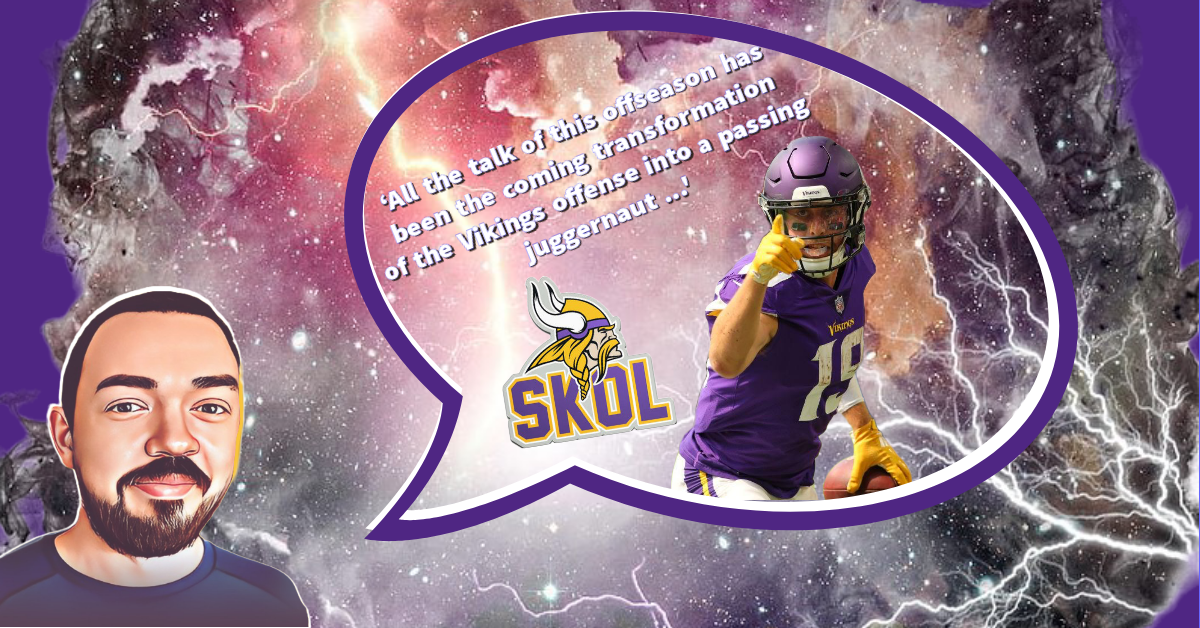 All the Vikings talk of this offseason has been the coming transformation of the offense into a passing juggernaut and what will that do for the fantasy prospects of Justin Jefferson and his ascension to WR1. But less has been talked about the fantasy prospects of the WR2 in Minnesota. After Pro Bowl seasons in 2017 and 2018, Thielen suffered through an injury marred 2019, and has been largely fantasy relevant through TD dependency, with 14 TDs in 2020 and 10 in 2021. His ADOT dropped to 9.5 yards from 12.2 and 11.5 yards, in 2019 and 2020, showing that the long passes, that were such a big part of his success when partnered with Stefon Diggs, are now part of his past. His longest reception of 2021 was 35 yards. Part of this is Justin Jefferson becoming the alpha dog he was drafted to be and him becoming the deeper target threat. Thielen is still a trusted target of Kirk Cousins with his 70.5% catch rate last year, and 54.5% of his targets coming with a distance to gain between 7-10 yards. So he will have a role within the offense because of his dependability.

As a receiver who was targeted 7+ times in all but 3 starts last year, will that role remain the same? A lot of that depends on KJ Osborn and whether his late season performance last year is sustainable. He filled the Thielen role, last year when Thielen was out injured, with TDs in 5 of the Vikings last 6 games. Osborn’sm main area of improvement is catch rate, which at 61% falls well below Thielen’s 70.5%. Cousin’s passer rating is also 119 when passing to Thielen while only 99 when passing to Osborn even with a comparable ADOT. So, the offense has typically had two major receiving weapons; first with Diggs and Thielen and now Jefferson and Thielen. The arrival of a third weapon may mean reduced target rate for Thielen but will a more pass-heavy approach mean more opportunity for all? I am projecting Cousins to go from 561 pass attempts last year, to 625 this year and an increase in passing TDs from 33, to 38.

So, with more competition, including the return of Fantasy sleeper Irv Smith Jr., but a higher pass volume, the question is will Thielen be worth drafting at his current ADP and where would I draft him? His current ADP is WR34, and 77th overall. At that cost, I wouldn’t recommend drafting Thielen.

His role has shown to be substituted for another receiver easily enough, even given the reduced efficiency mentioned above. The TD dependence is such a volatile thing to count on within fantasy football. It’s exactly why there is an elite tier of WRs, and then a bunch of streaming options [He ain’t kidding]. When you go chasing TDs, without the volume to offset it, you often get burned and those decisions can cost you games, and ultimately, at the end of the season, could be the difference between a shot at the title and consolation bracket. Thielen can be a solid WR3, since expectations for a WR3 are 8-10 PPR points, and hopefully a contribution that helps you in the closer weeks but what Thielen lacks, is the upside. You can likely stream a WR3 in most weeks given injuries but drafting Thielen, at his current ADP, means passing on Rashod Bateman, who will be in the WR1 role in Baltimore, that made Marquise Brown valuable or DeAndre Hopkins, who is suspended the first 6 games, but be will the alpha when he comes back, and will see less concentrated coverages, as defenses have to stay honest and cover Marquise Brown. Drafting either of these neighboring WRs, offers far higher upside than Thielen, because both of them have upside to deliver far above their ADP, later in the year when it truly matters.

I would feel comfortable drafting Thielen closer to 100 overall as a WR4, I can use as an injury/ bye week replacement. He will be more valuable than a streamer but is being drafted currently with upside WRs, I would take over Thielen. He will have a usable role, and if you can get him at a value, he should produce in a 3 WR or multiple flex league. He is someone who you put in your lineup every week and accept the 6 PPR point weeks and celebrate the 15 PPR point weeks. Hopefully, if you get him at a value and start him every week, you’ve spent valuable draft capital to strengthen other positions and offer yourself positional advantage in places such as RB2 and/or TE. I would much rather draft KJ Osborn at WR68 and 175th overall than Thielen. There is a much clearer path for him to drastically outperform ADP than Thielen. If I’m grabbing pieces of the Vikings offense, I am going with Mattison and Osborn as they have a viable path to fantasy relevance at a low cost.