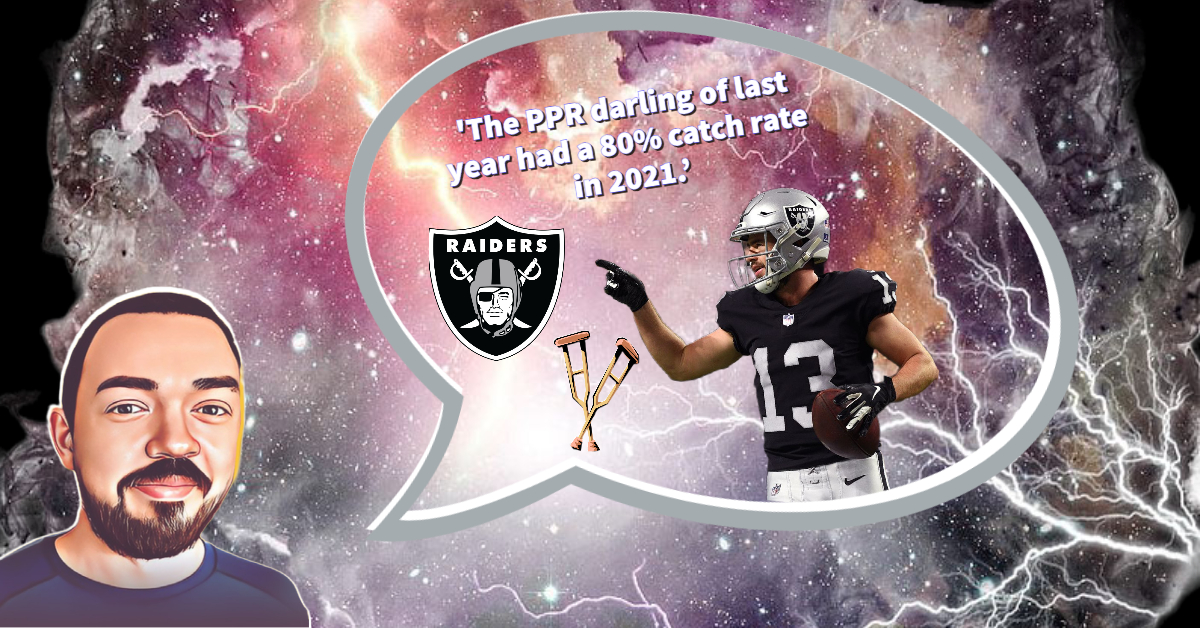 The PPR darling of 2021, who has also been highly debated, is Renfrow and whether he is a viable fantasy player going forward, or was he the beneficiary of Henry Ruggs arrest and subsequent release and the injury to Darren Waller. While his best games as a pro came after Waller’s injury, in the Thanksgiving game against the Cowboys, he had been a consistent part of the Raiders offense all year with more than 5 targets, in all but one game. The development of his connection with Carr was evident as he had averaged 74 targets in his first two seasons and that number progressed to 123 last year. This can be attributed to a few things. First of which was his hands since he had a 80% catch rate in 2021 and the other being his ability to gain yardage even on short area targets because he has a career YAC of over 5, even with an ADOT that is around 7 yards. He will have big time competition this year for targets with the addition of Derek Carr’s college teammate, Davante Adams, and the return of Darren Waller from injury. So the question is, was the success of last year due to lack of competition or a sign of things to come in 2022?

The biggest question that people have about Renfrow in 2022 is, how much opportunity will he have given the additions to the offense? Derek Carr threw 626 passes in 2021 which was 5th most in the league. There will likely be a reduction in passing volume as Josh McDaniels takes over the offense but that reduction in volume will likely correspond with an increase in efficiency. Davante Adams will likely command a massive target share since his career average is 153 targets a season and Carr targeted Adams 131 times in 13 games during their last season of college together. Adam’s potential target share combined with Waller’s 145 targets in 2020 with Carr and Renfrow will have some serious target competition. However, the major point is because of the type of receivers that Adams and Waller are, Renforw may actually benefit. Defenses will have to devote resources to Adams on the outside and Waller in the deep middle, likely leaving Renfrow with a lot of room underneath to get open. Carr is unlikely to force targets to receivers as evidenced by his completion percentage being at least 67.3% or higher each of the last 3 years. The one area of production likely to see regression are TDs. Renfrow had 9 last year (5 of which came after Waller was injured) from a QB who has only registered 30+ TDs once in his career. This combined with the TD machine that is Davante Adams (29 in the past two seasons) leads me to project a regression back to 5 TDs in 2022.  Which would mean he will be a volume dependent WR in 2022, whose ceiling will be based on how much of a target share he can carve out within the offense. So is he worth the ADP cost to draft?

Renfrow is currently being drafted as WR31 and 70th overall and he is being drafted in the tier with Amari Cooper, Elijah Moore and DeAndre Hopkins. The slot receiver, in what is primed to be one of the most explosive offenses in the NFL, I would still say the cost is right but wouldn’t draft him any higher than current draft position without an injury to one of the Raiders top receiving options. He is being drafted at the WR3/flex cost and is likely being faded due to concerns that his volume will plummet. I expect passing volume to decrease by 7% this year and for Adams to command a 25% target share but even with that, there is a role within the offense for Renfrow to command a 18-20% target share, or the equivalent to 7-8 targets per game. With his career 75% catch rate and since Renfrow can be very effective with the ball in his hands after the catch, he will be one of the more stable players on your team with a weekly 13-15 PPR points and will give you an advantage in your WR3 spot or he can be a stable, if not spectacular, WR2, if you decide, within your first 5 rounds to draft an elite QB or TE. He is a perfect late round 6 or early round 7 target especially for teams that are going to have high amounts of risk in other areas. You can certainly pass on Renfrow for more high risk/ high reward targets such as Gabe Davis or Rashod Bateman. They will win you more weeks than Renfrow but will also experience fluctuations due to their roles. Davis is the deep threat for the Bills, who will likely have a 14+ ADOT and Bateman who is the 2nd target (Andrews will be No.1) in a run-centric offense likely to look a lot more like 2020 than 2021, with their running backs healthy. I will draft Renfrow at the current price and stick with Renfrow as the opening up with the offense will decrease targets but should improve efficiency, likely resulting in increased yardage after catch and more overall possessions for a team in a division that will likely see many shootouts this year. Renfrow is likely a pick you make that analysts will mostly disagree with, calling him an average football player. However, he is an effective football player who has a defined role in an ascending offense and the ability to see that, is how you win championships and capitalize on perceived dips in production and value.