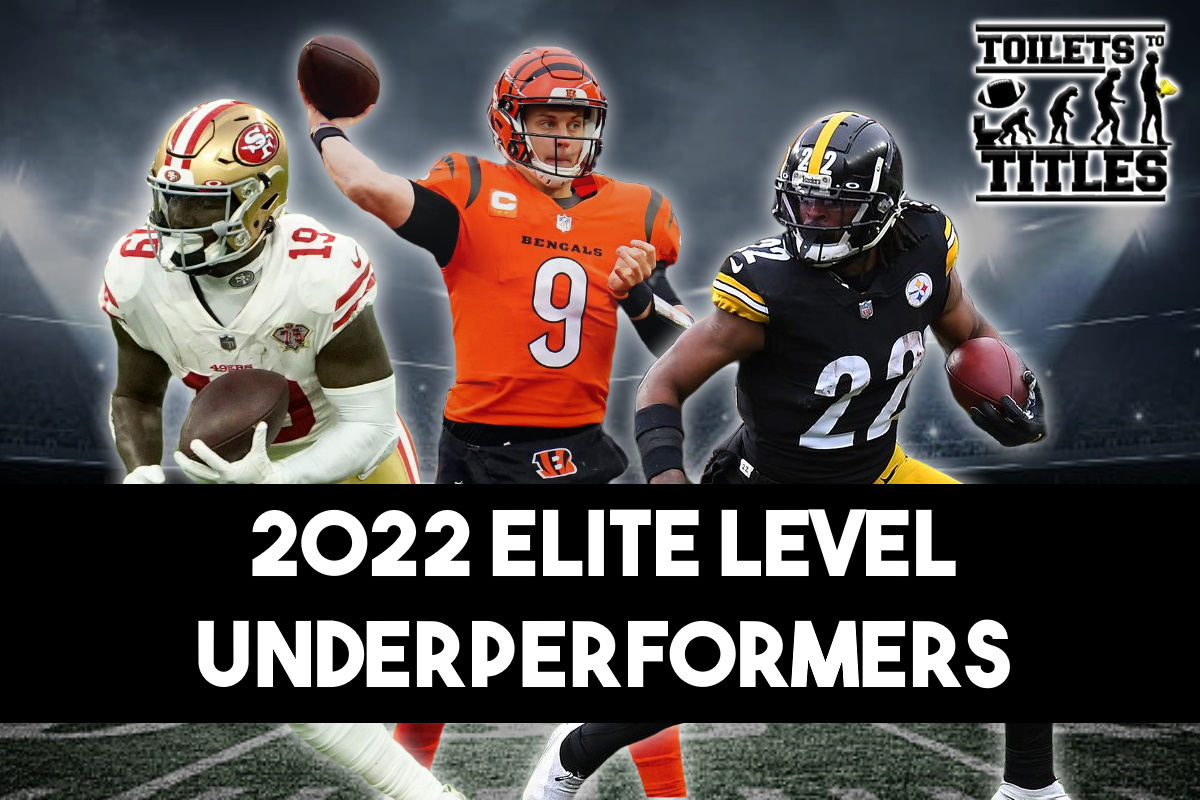 Every year a combination of factors, including prior season performance or changes in a team’s roster, leads players to be overvalued and overdrafted compared to where their historical inefficiencies or lack of elite upside says they ought to be selected. These are 3 players who are drafted as top 6 at their position who I believe will underperform their ADP and finish outside their position’s top 12.

Joe Burrow is coming off a great season and is one of the most efficient QBs in the league. The reason he will be a bust this season is that his potential doesn’t match his ADP, given his lack of rushing upside and how highly efficient the offense was last year. He led the NFL at 8.9 YPA, was 3rd in TD rate at 6.5%, and led the league in completion percentage at 70.4%, all on 520 attempts (15th in the NFL). And given that he is currently being drafted as QB4 (50th overall) in 1-QB formats, he doesn’t have the rushing upside or a reasonable path to increased passing volume to justify that ADP. The Bengals improved an offensive line that seemed overmatched during the playoffs, but that will likely strengthen a running game where Joe Mixon only averaged 4.1 YPC last season. When you draft a top-5 QB, you want QB1 overall upside. While Joe Burrow certainly flashed that in Weeks 13-17 last year, defenses will adjust and not play the Ravens’ blitzing, press style that Joe Burrow was able to torch. Joe Burrow, for me, is simply a case of a guy who I would draft if it was 2-3 rounds later, even beyond my reluctance to draft a QB in the first 7 rounds of 1-QB anyway. He will likely replicate numbers similar to last year with some probable TD progression, but not enough to outweigh the upside of QBs like Lamar Jackson (who will rebound from his TD regression last year), Kyler Murray (QB1 last year before his injury), Jalen Hurts, or a returning Russell Wilson, all of whom are being drafted a round or two after Burrow.

Najee Harris is a volume dependent running back, which, to me, never signals elite, and certainly doesn’t justify an ADP of RB4 and 6th overall. He averaged 3.9 YPC on 307 carries last season, which was 2nd worst of the top 15 in attempts (behind only David Montgomery). His fantasy value was mostly buoyed by 74 receptions on 94 targets, which was mostly a byproduct of Roethlisberger checking down due to a lack of confidence in his arm. Roethlisberger has retired and in comes Mitch Trubisky who is much more likely to help the fantasy production of Diontae Johnson, Chase Claypool and the incoming George Pickens and, when the play breaks down, to use his legs rather than dump it off to a RB. For reference, Harris and Austin Ekeler led all running backs in targets last season. Ekeler, while catching 4 less passes, had 180 more yards and 5 more receiving TDs than Harris, showing he was inefficient with his receptions as well. We have heard the talk of his offseason activity and improved shape (cue montage of “best shape of his life” quotes) but a likely bottom-10 Pittsburgh Steelers offense will not suit a volume dependent running back. Aaron Jones and Leonard Fournette will outscore and outperform Harris, who I expect to finish outside the top 12, and can be drafted a round later, allowing you to draft one of the three elite WRs in Round 1. Volume dependent, inefficient RBs should not be in the top half of round 1.

Deebo Samuel was one of the pleasant surprises of the fantasy world last year. A dual threat WR who was used in the perfect way to allow him to turn his skillset into fantasy superstardom, I believe, as a receiver, he will, again, be a valuable fantasy asset this year. But so much of what made him a league winner last year was the rushing ability that led to a 59-365-8 rushing line. Having a receiver who gets goal line rushing touches was invaluable. But the offseason has thrown that into flux, with Samuel’s trade request and the ascension of Trey Lance to QB. The trade request seems to indicate a lack of willingness to play the hybrid role without getting paid and Samuel, as of this writing, doesn’t have an extension. The ascension of Trey Lance further complicates Samuel’s fantasy value as Lance is the type of running quarterback likely to take goal line carries away from both Eli Mitchell and Deebo. It also hurts his receiving potential as Lance is likely to rush 10-15 plays per game which will shift the 121 targets that Deebo got last year down to around 100-105, especially if George Kittle stays healthy. All of this at a current ADP of WR6 and 16th overall. This bust potential is more about expectations of a repeat of last year mixed with a change in offense that likely diminish Deebo’s opportunities to achieve that production, regardless of how efficient he ends up being. At cost, I would much rather have Mike Evans a round later or Mike Pittman 2 ½ rounds later, both of whom will likely see expanded roles and have arguably more conducive situations to be league winners given ADP.