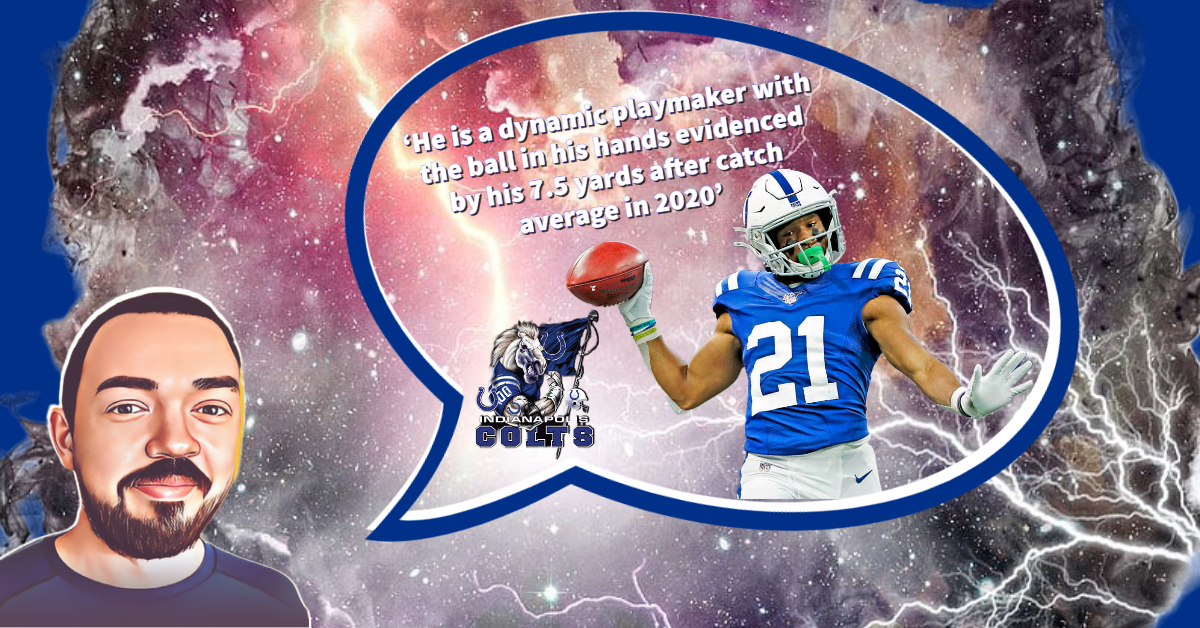 Great players cast a large shadow. Johnathan Taylor is a great player and was the talk of fantasy analysts last year during his blazing hot stretch run. Many forget that Nyheim Hines had a very fantasy relevant 2020 season, averaging 11.8 PPR PPG with Phillip Rivers at QB, who is known for historically checking down to RBs. He regressed to 6.9 PPR PPG in 2021 as Carson Wentz was far more reluctant to check the ball down but there is a new QB in town with the Colts, accepting that the Carson Wentz experiment was a failure. Matt Ryan will be the starting QB for the Colts in 2022 and the talk of the offseason through various media outlets has been their commitment to get Hines more involved. Does that mean a return to fantasy relevance though?

Hines fantasy relevance in 2020, and likely his path to relevance in 2022, is his receiving role in the offense. He is a dynamic playmaker with the ball in his hands, evidenced by his 7.5 yards after catch average in 2020. This led to 5 targets per game that season. Incoming QB, Matt Ryan, targeted RBs 144 times in 2021(25.7% target rate). This may be a match made in heaven. The Colts offense is also seeking playmakers given their only notable offseason addition was drafting Alec Pierce. The coaching staff will hopefully remember Hines being integral to Phillip Rivers success, in 2020, leading them to the playoffs. Another part of the Colts desire to get Hines involved in the passing game, may be to preserve Johnathan Taylor who was the league leader in carries last year and totaled 372 touches in 2021. This creates a path for Hines to get 10-12 touches per game with 5-6 targets per game being a realistic projection, with designed plays to get him into open space, where he is so dangerous. On top of being a top 5 handcuff running back in the league, he will be running behind one of the best offensive lines in football and his skill in the passing game makes him a real weapon.

While JT has only ever missed one professional game (due to being on CoVid-19 list), many other top 5 backs missed time last year, which paved the way for the relevancy of backs such as Khalil Herbert and Alexander Mattison. Hines gives you that value but also has upside of 13-15 PPR points in any given week and has historically produced those numbers, even with JT on the team. He is also an efficient runner, partially, due to him being the receiving back allowing for designed draw plays as evidenced by 4.3 YPC in 2020 and 4.9 YPC in 2021.

His current ADP is RB45 and 132nd overall. He is being drafted around other handcuff RBs, such as Darrel Henderson and Khalil Herbert, as well as rookies who may have a role such as Tyler Allgeier. His role within an efficient offense and an offensive line with All Pros on it( PFF 10th ranked in the NFL) makes that an appropriate price. You will likely have to pay a late 10th or early 11th round price to get him depending on draft position as the hype and potential will have his draft stock rise. Of the running backs being drafted in this range, he has the highest upside as other backs are held back by circumstance. Henderson has had his own struggles staying healthy, Herbert is extremely talented but his upside is probably restricted by an offense that will have long periods of stagnation due to lack of other weapons, and Allgeier may have more opportunity than Hines but efficiency is a concern in what is likely the worst offense in the league. Hines, if called on to be the primary back, in what would likely be a committee if Taylor is hurt, would have week winning potential of 20-25 points who will be a valuable flex throughout the season and an RB2 on bye weeks.

I wouldn’t draft Hines if I had drafted JT, as I don’t believe the upside is there in that play. If I went zero or hero RB, Hines is exactly the type of target I would make in the middle of the draft because he will score you enough points to where your positional advantages will win you weeks. In rounds 10-12, if you are choosing between flex options that you project to have similar point totals, always draft the RB due the volatility of the position and the FAAB cost of a starting running back as opposed to being able to stream WR3 and Flex options. Many people spent significant FAAB on Alexander Mattison last season. Draft a handcuff like Hines and, if time comes where he is the starter due to injury, you can either start him and likely win the week or cash in and trade him to a struggling team desperate for a win and improve other aspects of your team.