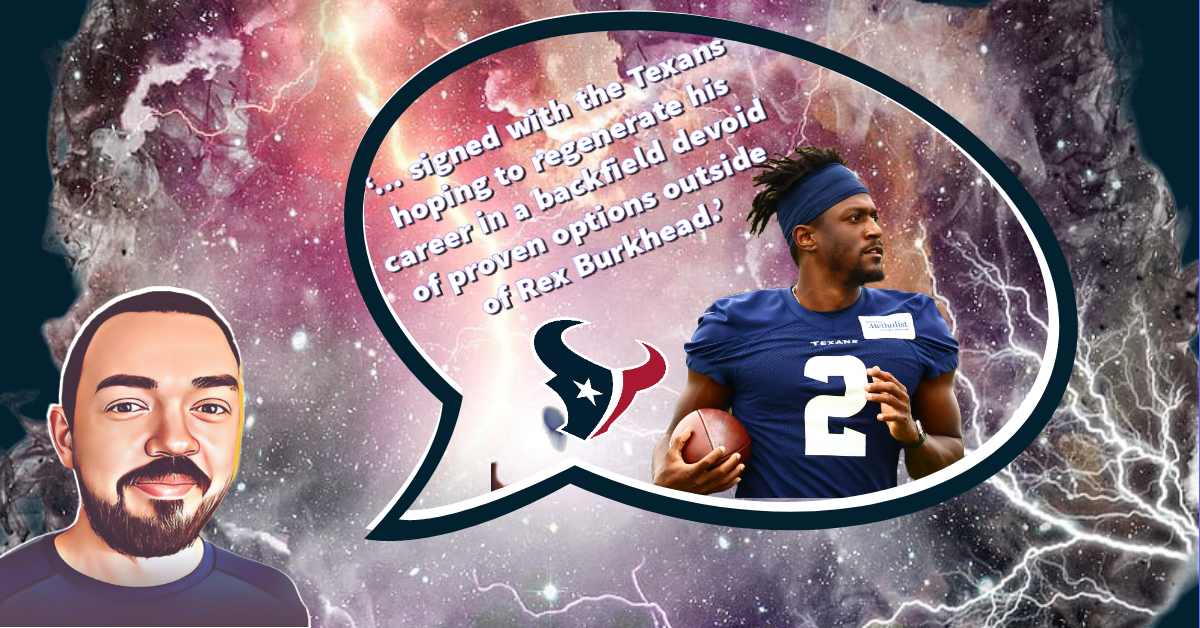 After an Achilles injury in 2020 and then spending 2021 seeking a trade while wading in relative obscurity behind Jonathan Taylor and Nyheim Hines, Marlon Mack hopes to make his return to fantasy relevance with the Houston Texans. Mack broke out in 2018 catching fire in a stretch that corresponded with the Colts winning 10 of 11 games. He finished the season with 195-908-9 with several RB1 performances including 25-132-2 against Oakland in Week 8 and 27-139-2 in Week 14 against Dallas. So, heading into the 2019 season he had all the momentum in the world. He started 2019 with 25-174-1 in Week 1. He finished the season with 247-1091-8 in a season full of up and down performances where he missed 2 games due to an injured hand and then struggled for several games upon his return. That offseason the Colts invested a 2nd round draft pick Jonathan Taylor out of Wisconsin. And after his 7th touch of week 1 of the 2020 season Mack tore his Achilles. A devastating and career threatening injury for a running back. He would miss the rest of the 2020 season as Jonathan Taylor cemented himself as the teams RB1 and Nyheim Hines as the teams receiving back catching 63 passes from Phillip Rivers. Mack rehabbed through the offseason and came back in 2021 healthy. However, the role that he had once thrived in, was no more. He totaled 30 touches in the 6 games he played in and requested a trade during the season. That didn’t materialize and he was inactive for the final 9 games.

He signed with the Texans hoping to regenerate his career in a backfield devoid of proven options outside of Rex Burkhead. He is however receiving a severe downgrade in offense and offensive line as the Colts have Pro Bowlers and All Pros on their offensive line. So what do Mack’s prospects look like for 2022 and how successful will he be?

Mack will have to compete in training camp with Dameon Piece, a rookie out of the University of Florida. An explosive athlete but has never proven to be the bellcow back as Pierce never topped 125 touches in any season in college. Mack has the far more proven pedigree. I do believe however, at least initially, that it will be a RBBC(running back by committee). A system Houston employed last year, 4 RBs had more than 50 carries. There will also likely be an increase in volume for Davis Mills and the passing offense in his 2nd year in the NFL. Which is unlikely to help Mack given that he has never been much of a receiving threat since never eclipsing more than 21 receptions in any of his years within the league. His role will likely be a rotating back with 10-12 touches per game with the opportunity of winning the feature back role as the season goes on.  Which is what Burkhead did last year, leading to one last glimpse of fantasy relevance for him.

The real question is, what does Mack look like after the injury?  Last year in limited action he averaged 3.6 YPC and, much like we saw from Cam Akers, in his late season return, didn’t look quite as explosive as he had previously been. He has also historically not been a great yards after contact back, always averaging more yards before contact than after and hovering around league average in YAC. Given the immense success of Jonathan Taylor last year behind that offensive line you have to wonder how much was the player and how much was the system. He now heads to a team that averaged 3.4 YPC last year. Mack’s best case scenario this year is 4 YPC and to be more of a receiving threat in the past to score fantasy points through check down passes in garbage time, as the Texans will probably trail late often in games as one of the contenders for league’s worst record. The worst case scenario for Mack is the same result as last year’s fantasy irrelevance or that he gets passed in training camp by Dameon Pierce, who is my projected leader in carries for the Texans. The Texans have reduced rushing volume given being a contender for league’s worst record and will likely be throwing from behind.

Currently being drafted at RB56 and 167th overall, he represents low risk and possible high reward. I am, however, currently drafting Dameon Pierce at RB 44 and 122nd overall at a much higher rate. Pierce has shown more explosiveness recently and doesn’t represent a much  higher cost at only an early 11th round pick for a possible feature back. If you draft Mack to see how the first couple of weeks go, he will likely be one of your first cuts as we reassess the landscape with the first set of waiver runs. History just isn’t on the side of 26 year old RBs who have suffered Achilles injuries and spent a year as an RB3. Drafting Pierce is the kind of low risk, high reward you look for as he had a career 5.5 YPC in college, albeit in limited action. He also showed receiving ability in a low volume passing offense averaging 18 receptions and 9.4 YPR in his last two seasons. Mack is on a team that a lot of people are fading but I will buy the value on players like Nico Collins and Dameon Pierce and will be passing on the potential value of Mack, as I don’t see fantasy relevance within the range of outcomes and it’s likely that he will be a waiver wire pickup if that relevance comes next season.