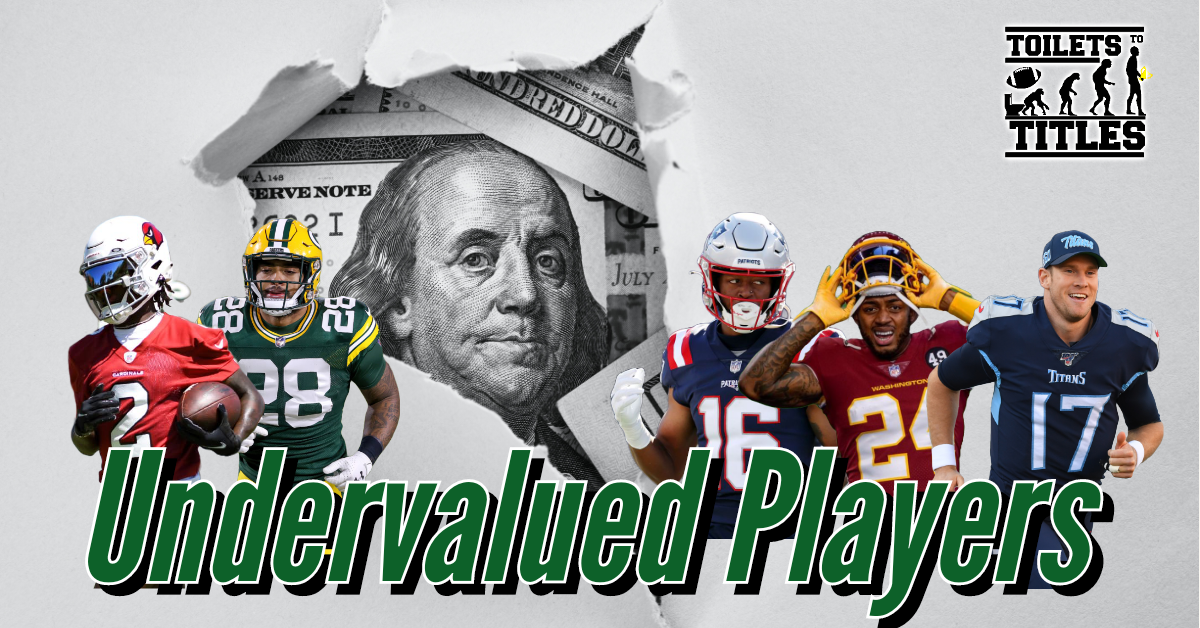 Have you ever sat down and looked at player stats and become surprised at how good a player was? Me too! So below, I’m going to give you 5 players whose stats may surprise you and why they will outperform their current average draft position.

Marquise Brown finished the 2021 season with 91 receptions, 1,008 receiving yards, and 6 touchdowns in 16 games. He finished the 2021 season as the WR 23 overall, ahead of guys like Terry McLaurin and Amari Cooper, who are being drafted ahead of him in 2022. This offseason he was reunited with his college QB Kyler Murray and will play the first 6 games without DeAndre Hopkins. I wouldn’t be surprised if Marquise Brown finishes this season inside the top 20 wide receivers, ahead of guys like Amari Cooper, Mike Williams, DK Metcalf, and Chris Godwin, all of whom are being drafted ahead of him.

Jakobi Meyers finished the 2021 NFL season with 126 targets, 83 receptions, 866 receiving yards, and 2 TDs. What’s impressive about that is the 126 targets were the 22nd most amongst all wide receivers in 2021. He had more targets than Amon-Ra St Brown, Mike Evans, Tee Higgins, and Tyler Lockett. Meyers finished the 2021 season as the 33rd-ranked wide receiver in fantasy. The Patriots brought in Tyquan Thornton and traded for DeVante Parker this off-season. Jones is a rookie and we have seen how rookies tend to adapt to the NFL in New England. DeVante Parker is a talented WR but has a history of battling injuries. I 100 percent believe Jakobi Meyers will outperform his current average draft position of wide receiver 63. Look for Meyers to finish around wide receiver 40-45 with the likes of Alan Lazard, Kadarious Toney, and Christian Kirk.

Antonio Gibson had 258 rushing attempts, 1,037 yards, and 7 touchdowns in 2021. Those 258 rushing attempts were the 4th most in the NFL last year, his 1,037 rushing yards were 6th in the NFL, and his 7 touchdowns were tied for 8th most amongst all running backs. Gibson also added 42 receptions, 294 yards, and 3 touchdowns. Antonio Gibson finished 2021 as the running back 10 overall ahead of running backs Javonte Williams, Nick Chubb, and Dalvin Cook. The Commanders have improved their quarterback position by acquiring Carson Wentz this offseason. They also drafted speedy wide receiver Johan Dotson and, with a healthy return of Curtis Samuel and Logan Thomas, there should be more opportunities for Gibson to find open space. With his current draft position of RB 19, I would not be surprised to see Antonio Gibson finish ahead of Cam Akers, Javonte Williams, and David Montgomery, all of whom are being drafted ahead of him.

Ryan Tannehill finished the 2021 season with 357 completions on 531 attempts, 3,137 passing yards, and 21 touchdowns. He also added 270 rushing yards and 7 touchdowns on the ground. This was in a season where AJ Brown and Julio Jones both missed multiple games due to injuries. The Titans were also one of the few teams in the NFL that did not have a player receive over 1,000 yards. Their leading wide receivers on the season were AJ Brown (under 900 yards),  Nick Westbrook-Ikhine (476 yards), and the aforementioned Julio Jones (434 yards). AJ Brown was traded to Philadelphia and Julio Jones signed with the Tampa Bay Bucs. The Titans drafted highly touted rookie Trylon Burkes, traded for veteran wide receiver Robert Woods, and signed veteran tight end Austin Hooper. If Derek Henry can remain healthy, that will open up the passing game for Ryan Tannehill. I expect Ryan Tannehill to have a much better season than his 2021 campaign, where he finished the season as the quarterback 12. Currently, Ryan Tannehill is being drafted as quarterback 23. I would not be surprised to see Ryan Tannehill finish ahead of Justin Fields, Mac Jones, and Trevor Lawrence, all of whom are being drafted ahead of him.

All stats were pulled from Pro Football Reference and Fantasy Pros