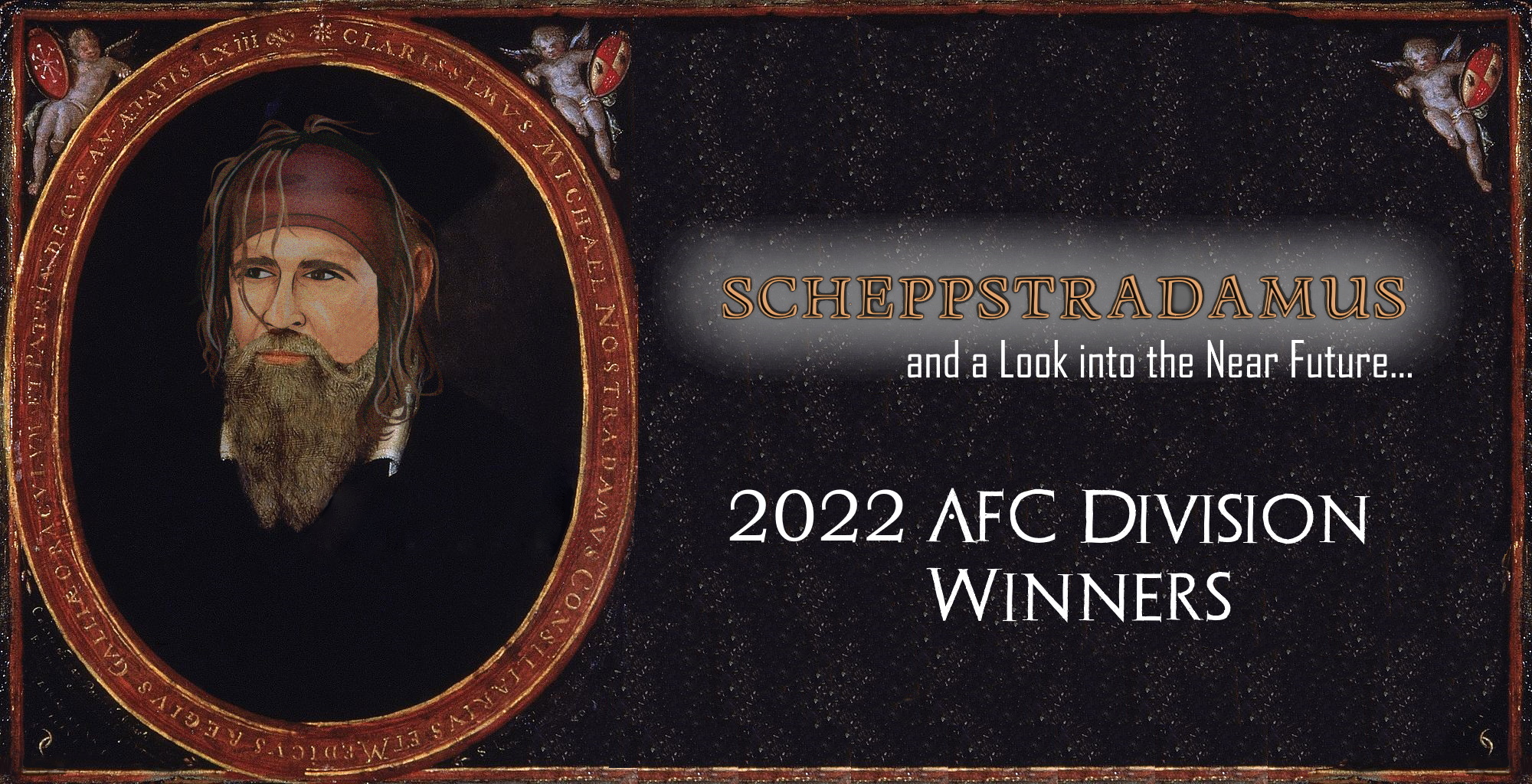 I have seen the scales tilt above and below Vegas’s win total projections for 6 NFL teams and I now set my sights further down the road. Below I will predict which AFC teams will be crowned champion of their respective division.

At this point, it looks like Lamar Jackson will play out the 2022 season on his rookie contract. This could mean a monster season for young Lamar in an effort to secure a big payday. JK Dobbins is expected to be healthy and the addition of Rashod Bateman should provide a legitimate WR1 presence on the outside. The Steelers have yet to have a losing season under Mike Tomlin but with Ben Roethlisberger retiring, they will be doing their best to stay afloat with either Mitch Trubisky or Kenny Pickett at the helm. The Browns are surrounded by controversy centered around their new QB, Deshaun Watson. Word is he has looked phenomenal at camp and brings a level of QB talent to the roster that they have not seen in quite some time. The Bengals have the potential of suffering from a Super Bowl loss hangover but I do not see that happening. Their offense will take a major step with Joe Burrow leading the way. Ja’marr Chase, Tee Higgins, Tyler Boyd, and Joe Mixon will prove too much to handle for their rivals in the North.

Fireworks will be a consistent theme in the AFC West, as should be expected. You get what you pay for and these teams ponied up this offseason. I anticipate this being the most exciting division in the NFL this coming season. Well, all of them except Kansas City. The Chiefs will be going into the year as the only team that did not make a power move this offseason and, on the contrary ,they traded away their most talented WR. Though JuJu Smith-Schuster and Skyy Moore will prove to be sufficient, it will not be enough to keep up with the rest of the West. The LA Chargers added Khalil Mack to their defensive front and put not only the division, but the entire AFC on notice. Mack, Bosa, Derwin James, and free agent addition JC Jackson will lift the Chargers to the playoffs, but not to a division crown. The Raiders sent their ships to Green Bay and pillaged the Packers’ star wide receiver, Davante Adams. Adams, Waller, and Renfrow are going to be an exciting trio, and Derek Carr will have his best season to date. The cream of the crop sits a mile high, in Denver, Colorado. This team has been primed for success but they have not had the leadership needed to achieve it. Russell Wilson, a man who has been to the summit, will help guide this team through many tough battles this year. Look for Patrick Surtain, Javonte Williams, and Jerry Jeudy to become household names this season.

The Jets front office has been working very hard to produce a bountiful harvest but the seeds of their labor are not yet ready to bear fruit. Jets fans, know this, your time is coming. The New England Patriots saw a quick turnaround of their fortunes after the addition of Mac Jones. Their ground game and historically stout defense should do well, but they lack the weapons on the outside to keep up with the Bills or the Dolphins. Tua Tagovailoa will have his best supporting cast since entering the NFL. Tyreek Hill has been considered one of the best wide receivers in the NFL over the last 3 seasons and Jaylen Waddle will be mentioned in that conversation after this year. Javon Holland and Jaelen Phillips will step up on the defensive side of the football to help veterans Xavien Howard, Byron Jones, and Christian Wilkins. The Buffalo Bills will have a very sour taste in their mouth this season after the way they were eliminated from the playoffs last year. I expect veteran quarterback Josh Allen to channel that negative feeling and use it to lift the Bills from just a pretender to a legitimate contender. With the loss of Cole Beasley and Emmanuel Sanders, look for Gabriel Davis and Isaiah Mckenzie to see increased roles in the offense. The running back position, which has been somewhat of a question mark the last few seasons, will ultimately end up being taken over by rookie James Cook by year’s end.

The Jacksonville Jaguars and the Houston Texans have been the court jesters of the NFL for quite some time now. Throw in a few decent moments over the past decade, neither team has been able to get a grip on what it takes to compete regularly in the NFL. Davis Mills showed he can make NFL throws and the Texans may be onto something with him. Trevor Lawrence, on the other hand, struggled to consistently perform at a level which we would expect from the number one overall pick. Doug Pederson has been brought to Jacksonville to get Trevor Lawrence right. Along with Doug Pederson, the Jaguars spent a pretty penny on offensive weapons, such as Christian Kirk and Evan Engram. Neither of those names strike fear into opponents’ eyes but they will be a welcome sight to Trevor Lawrence based upon what he was looking at last year. King Henry has returned to Tennessee and he will be the driving force for the offense as they attempt to take the crown of the AFC South yet again. Jeffrey Simmons and Kevin Byard will be anchoring the defense and will round out a team that is viewed as one of the most physical in the NFL. Unfortunately for the Titans, the Colts have seen their formula, have matched their formula, and are now much more suited to cash in on that formula. Young Jonathan Taylor, accompanied by arguably the best offensive line in football, will front the Colts’ new brand of smash mouth football. Matt Ryan will take over at quarterback and will get the job done when called upon. Darius Leonard will return at the mid-season stretch, just in time to give the Colts a shot in the arm.