Top 5 Coaches in the NFL 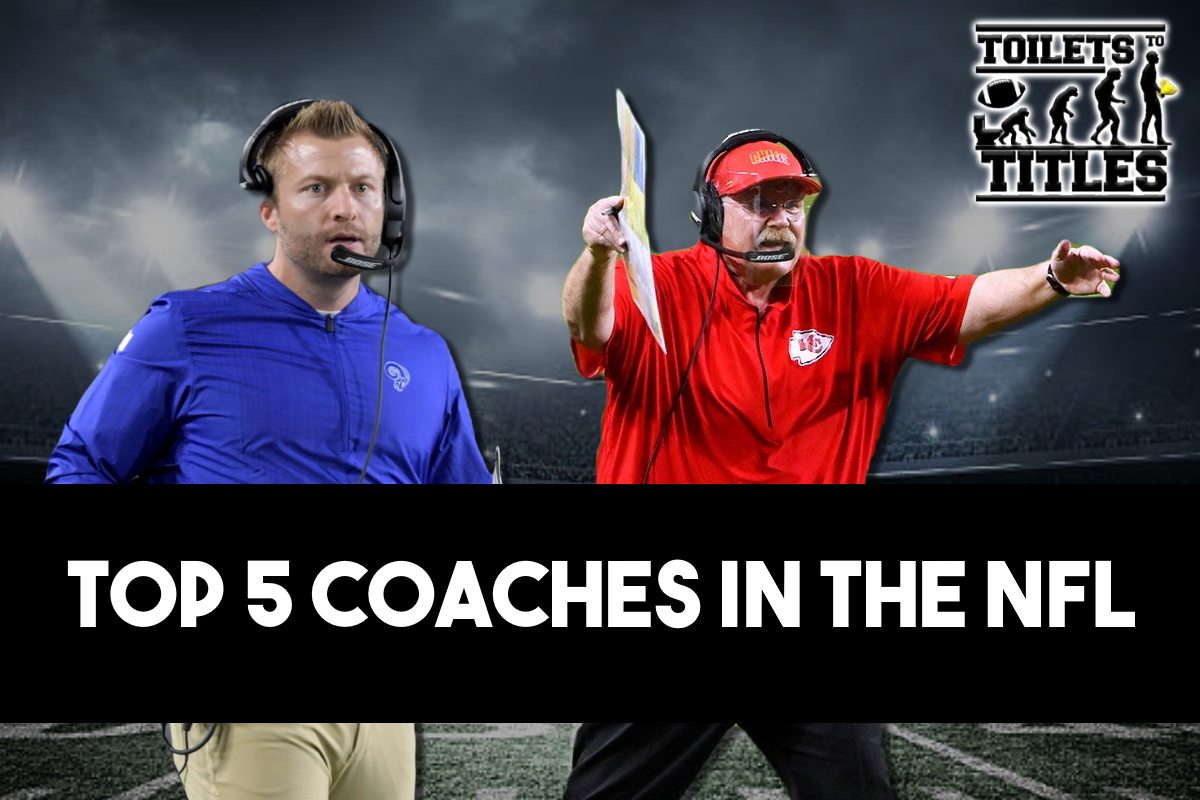 Where to start? I’ve always told people that if there is something that you want to do, you should just do it. Don’t wait for the perfect time, perfect situation, perfect… well, anything. There’s no real perfect time to do anything and if you wait on doing something until the time is perfect, odds are you will never start or complete your task. Why did I start this article off like this you ask? I have always wanted to write a small article on football, but I never felt the time was, well,  perfect. I never felt I’d have the confidence to actually do it. So now here I am, doing my first article, finally taking my own advice. Here’s my top 5 coaches in the NFL today.

Andy Reid tops my list as the number 1 head coach in the NFL today. Coach Reid is the winningest head coach in Eagles history, finishing his 14-year tenure in Philadelphia with a 140-102-1 record (including postseason). He won six NFC East championships, made nine postseason appearances, reached five conference title games, and earned one Super Bowl appearance with the Eagles. Since joining the Chiefs in 2013, Coach Reid has compiled a .633 winning percentage. He has won 19 playoff games, including the Super Bowl in 2019 and AFC Championship game in 2021. Under Coach Reid’s leadership, the Kansas City Chiefs have never had a losing season and, since 1999, Coach Reid has only had 3 total seasons below .500. He is also the first coach to win 100 games with two different NFL teams: the Philadelphia Eagles and the Kansas City Chiefs.

I may get some slack for having Coach Belicheck this far down my list and I would say that’s fair. Widely considered by most as the ‘goat’ when it comes to coaching, there’s nothing Bill Belicheck hasn’t accomplished in his career. Most forget that Coach Belicheck was fired by the Browns after posting a record of 36 wins and 44 losses and lasted barely 24 hours as the New York Jets head coach. Since joining the New England Patriots, he has compiled a .720 win percentage. He has won 353 games, 6 Super Bowls, 9 AFC Championships, and 17 AFC East Championships. The reason I have Coach Belicheck 2nd on my list is because I have to acknowledge that he’s had the benefit of playing in the weakest division in football the last 20 years and he’s benefited from having some guy named Thomas Edward Patrick Brady Jr as his quarterback for almost the entirety of his coaching tenure in New England. There are also the controversies that have continued to surround Coach Belicheck and the Patriots organization: Spygate, Deflategate, Tuck Rule, and coms issues that only seem to happen in New England.

As you may have noticed by now, tenure means a lot to me when I grade NFL Coaches. Coaching is a cutthroat business and the average coach only lasts 3.2 years. You have to be a great coach to remain employed for a long period of time with one team. Coach Tomlin has spent 15 years with the Pittsburgh Steelers. During this time, they have won 241 games, had zero seasons below .500, won 2 AFC Championships, and a Super Bowl in 2008. Coach Tomlin was, at the time, the youngest head coach in NFL history to win a Super Bowl. He has overseen the circus that was the Ben Roethlisberger sexual assult accusations in 2008 and 2009. He’s also had to handle the personalities of players like Le’Veon Bell, Antonio Brown, JuJu Smith-Schuster and the tragedies of players like Ryan Shazier. Through it all, he’s posted winning seasons and has made the playoffs in 10 of his 15 years.

Longevity matters to me. Great Coaches are a very rare breed in the NFL. John Harbaugh took over as the Baltimore Ravens head coach in 2008. In that time, he’s compiled 255 wins, 1 Super Bowl Championship, and has had only 1 season with less than 8 wins. He’s had to change his coaching philosophy going from Joe Flaaco at QB, whose athleticism is next to none, to Lamar Jackson at QB, who’s one of the most athletic QBs in NFL history. Coach Harbaugh has led the Ravens to the playoffs in 9 of his 14 seasons and has won 11 playoff games over that span.

Number 5 on my list hasn’t been in the NFL long, but we cannot ignore how successful he’s been in such a short time. Coach McVay has compiled 81 victories, a .679 winning percentage, has gone to the Super Bowl twice (winning in 2021), and never lost more than 7 games in a single NFL season. Consider the names that have come from his coaching tree: Zac Taylor (1 Super Bowl appearance), Matt LaFleur (3 straight 13-win seasons), Brandon Staley (Chargers head coach). This is quite impressive for a coach who’s only been an NFL head coach for 5 seasons. It’s easy to see McVay moving up this list as he continues to be successful in the NFL.

That’s my list of my personal top 5 NFL head coaches. I clearly have longevity and long-term success as a heavy factor on whom I view as a top head coach in the NFL. Longevity breeds success and success breeds longevity. As I mentioned earlier in this article, I finally put the proverbial pen to paper. I hope you enjoyed reading this as much as I have writing it.