No-brainers and Migrainers – Week One 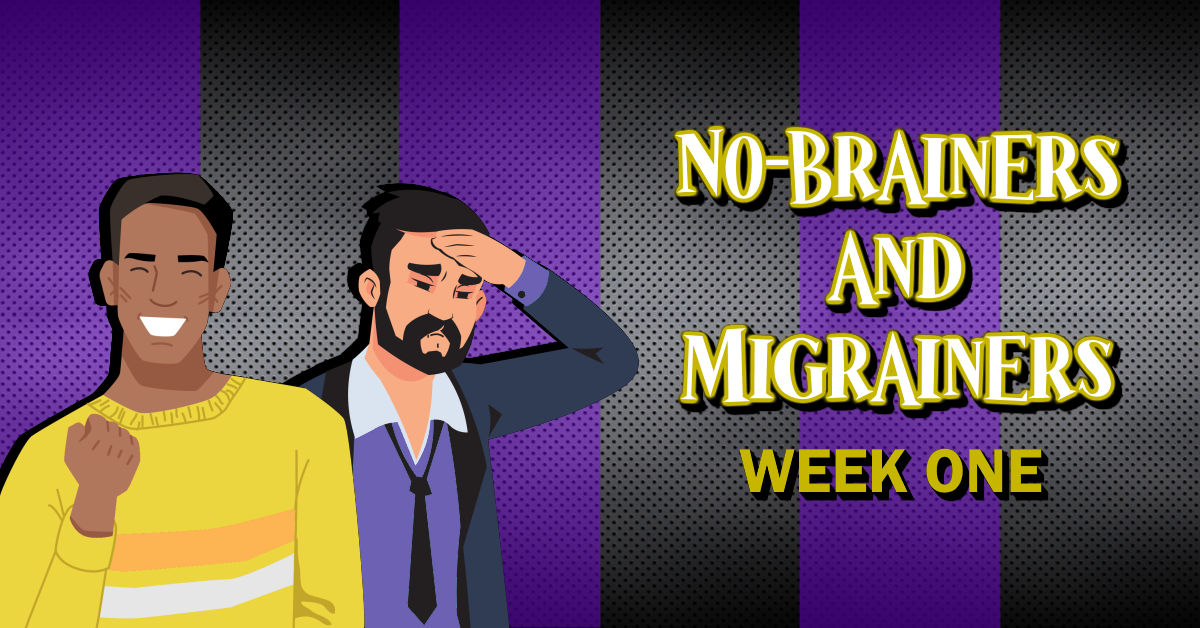 First off, it is week 1.  We don’t actually know how teams are going to perform.  We try all off season to theorize what offenses and defenses are going to be good or bad but we are not typically correct in our assumptions.  Secondly, fantasy teams were just drafted. So, don’t overthink week 1 lineup decisions.  Start the guys that were drafted for the starting lineup.  Keep it Simple.  Lastly, don’t go overboard with the suggestions in this article and try to understand that I think the following players and teams will outperform or underperform their expected values and not necessarily be the top guys in their respective positions.

The Steelers are starting out their season on the road against the Bills in Buffalo.  Big Ben is notorious for not winning on the road but he is going to try and should have to throw the ball a lot to keep up with the high-flying Bills offense.  This is also the freshest and healthiest Ben’s arm will be all season.  Diontae Johnson was most likely drafted high enough that he’s not being sat anyway, but I would suggest trying to get Juju and Claypool into a WR3/Flex spot.  I want every chance to hit big in this week 1 matchup.

The Jaguars are playing Houston in week 1.  That should be enough to entice anyone to go all in on Robinson.  It should be a big week for all the Jacksonville starters but to limit their rookie Qb’s mistakes, I think they keep the ball in Robinson’s hands and keep it on the ground as much as they can.  Robinson should have plenty of running room and therefore, the ball will stay in his hands for a good portion of the game.  Especially, once the Jags get out to a lead.  If you drafted early and got Robinson before the Etienne injury, you may have to make the choice to start Robinson over your drafted RB2.  I suggest you go for it!  Robinson is primed to finish as a mid- to low-end RB1 in week 1 against the Texans.

Dun, dun, dun…  Double revenge game stack attack!  Sam Darnold and the Panthers are going up against Darnold’s former organization that picked him 3rd overall in the 2018 draft.  The Jets decided he wasn’t their future after a few bad years with Adam Gase at the helm and sent him off to Carolina for pennies on the dollar.  He is reunited with former teammate and Carolina WR, Robby Anderson.  Anderson’s role changed drastically when he arrived in Carolina and moved to the chain-mover role across the middle of the field.  With the connection between Darnold and Anderson already established, I think Darnold will be a borderline low-end QB1(a no-brainer choice for your superflex) and Anderson will easily be a WR2.  So, don’t miss out on their early season chance for revenge.

I know, Joe Burrow had everyone drooling last year with an absurd amount of passing volume in the games before he was sidelined by a nasty knee injury, which included multiple ligament tears.  But I would temper expectations early in the season as he returns from that major injury and gets reacclimated to game speed.  Hell, as of writing this it isn’t even a guarantee Burrow is out on the field for the season opener.  It seems to be trending that way but if he sits and Brandon Allen is the QB, fugetaboutit.  Not to mention, the Vikings retooled their defense this offseason and returned some veteran holdouts from 2020 and should regain defensive dominance in 2021.  Out of all the WRs in Cincy, I would only feel comfortable starting good ol’ Tyler Boyd.  As he is the safety blanket over the middle of the field.  But Higgins and Chase might be disappointing in week 1.

As we say here at Toilets to Titles, Daniel Jones stinks.  Plain and simple.  But, I know you want more of a reason other than the fact he is a turnover waiting to happen.  So, here you go.  Denver has been building this defense for the last few years in an attempt to regain some of that defensive dominance they had only a few years ago.  They have revamped their secondary after ditching older guys, like Harris, and replacing them with some nice young players, like this year’s 9th overall pick Patrick Surtain.  Then, on top of a defense that is going to want to make an early impression this year, the main talents on the Giants offense are most likely not at 100%.  Saquon is coming back from an ACL suffered last year and will probably have a snap count.  Golladay has been hampered by a nagging hamstring injury suffered in training camp.  I don’t want any part of this disaster waiting that we call Daniel Jones.

Don’t hear what I’m not saying.  Trey Sermon is a stud and will eventually be the lead RB for the 49ers but Sermon may need to wait until Raheem Mostert is inevitably out because of an injury.  But while Mostert is healthy, I believe he is going to get a majority of the touches.  I suggest giving this rookie some time to get out on the field in a real game situation and show what he can do before starting him in any lineups.  The 49ers want to run the ball but they will use multiple guys.  I would suggest letting shake out a bit or wait for Mostert to get injured before firing up Sermon into lineups.

That’s it.  That’s my stars and scrubs for week 1.  Please, please, please remember I am not suggesting to sit obvious studs or fantasy starters for the above mentioned players.  But these players have an opportunity ahead in week 1 and may be able to find a way into lineups as a flex spot or WR3 or superflex.

Dudes & Duds – Week One
My Rules For Setting Your Lineup