5 Tight Ends Ready to Kick the CFB Door In 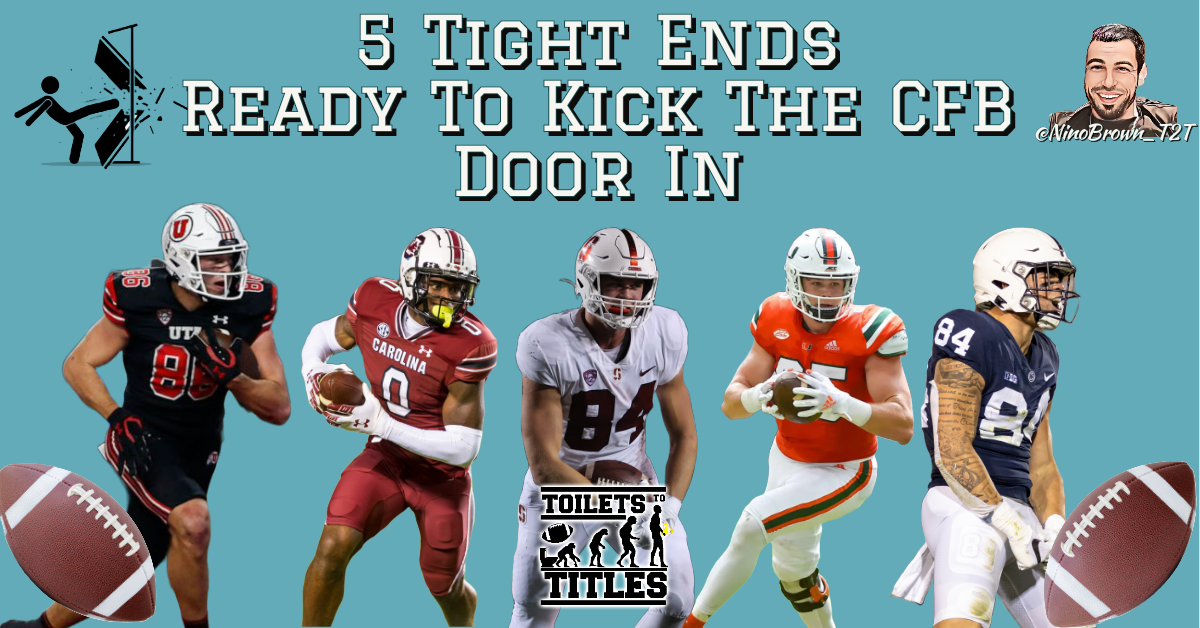 The College Football season begins in less than 3 weeks and camp battles are still going strong! Once things get locked in, there is no turning back. So I’ve compiled a short list of tight ends who I feel are, in the famous words of Notorious B.I.G., ‘Kick In The Door’ on the College Football world.

We all know the tight end position is probably one of the toughest to nail ‘that guy’. It’s like throwing axes or darts in a dimly lit hallway, maybe 1 out of 7 will hit. I get that but it is very hard to brush off opportunity, volume, size, and raw ability and these 5 gentlemen have all these traits. So let’s kick it off!

Theo Johnson, Penn State University (6’6” 256lbs): Theo is a big-bodied receiver with top notch open field awareness, agility, and quickness. Johnson is a savvy route runner for a big fella but is also great off the line, consistently dipping his shoulders to avoid a lot of jams. He creates good separation on post and stick routes and uses his hands well in tight, congested coverage. Johnson is currently #2 behind Brandon Strange as the Nittany Lions TE1, but he did average 11.8 YPC in ‘21 with 1 TD. The Nittany Lions have a talented WR group that can stretch the field which should allow both TEs to eat over the middle.

Jaheim Bell, University of South Carolina (6’3” 230lbs): Jaheim is a former 4-star recruit with 4.5 40 speed. Coming off a season in which he hauled in 30 receptions for 485 yards and 5 TDs, Bell is ready to increase those numbers with new QB Spencer Rattler. Bell is phenomenal off the line and has good upper body strength to beat jams at the line. His precision route running and ‘on a dime’ cuts allow him to get consistent separation, which makes him hard for a linebacker to cover. When it comes to protecting the quarterback, his elite hip mobility allows him to effectively block the pass rush and then sneak down the field.

Will Mallory, University of Miami (6’5” 245lbs): Will has soft hands and catches the ball tremendously well in traffic. He uses his big 6’5” frame to shield off defenders, but also has the ability to lower his body and avoid tackles. Mallory has very good tracking of the football and QBs had a 124.9 rating when targeting him last season. With new HC Mario Cristobal bringing his power style offense from Oregon to The U and a young WR group, look for QB Tyler Van Dyke to target Mallory often off the play action or RPO.

Dalton Kincaid, University of Utah (6’4” 242lbs): Kincaid had 8 TDs in ‘21 on 36 rec for 510 yards and 14.2 YPC. He was the main benefactor of Cam Rising taking over the QB1 for the Utes. His change of speed, hesitation, and shoulder movement led Kincaid to making a ton of ‘wow’ catches last season. Kincaid has elite body control and can adjust to poorly thrown balls very well. He allowed 0 pressures to go along with 0 sacks in ‘21, so his blocking ability is top notch. Both QBs combined for a QB rating of 153.5 when targeting Kincaid last season. He was ranked 3rd in TDs and 8th in YPC in the Pac-12, all while operating as TE2 behind Brant Kuithe. Kuithe is still first in line but there is plenty of room for both TEs to eat at the buffet.

Benjamin Yurosek, Stanford University (6’5” 235lbs): Yurosek is a great chain mover who has a sneaky red zone presence. He has elite footwork for a tight end and can play off the line well with his quick burst. Big Yuri has incredible field awareness that was on display last season with his multiple 40-yard TD scores. His great pass-blocking ability will translate well at the next level, as Yurosek has allowed 0 pressures and 0 sacks in his two seasons at Stanford. In the ‘21 season, he was ranked #2 in Power 5 TEs, with 13 catches for 20+ yards, as well as top 7 in the Pac-12 for total yards (658) and YPC (15.3). Look for Tanner McKee to pepper Yurosek in the ‘22 season and his stock to rise for the NFL draft.