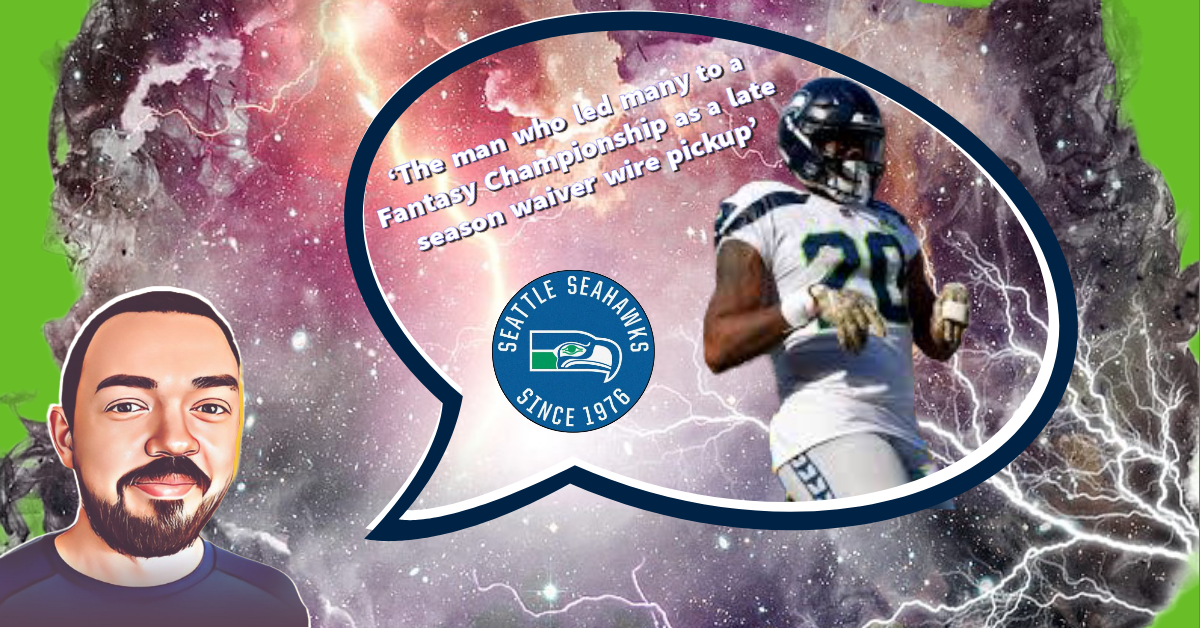 The man who led many to a fantasy championship, as a late season waiver wire pickup. Penny averaged 22 PPR points in the final 5 games of last season. Although, his career has been marred in the first two seasons by the inability to beat out Chris Carson for the starting job and in the last two by injury. The last five weeks showed off the explosiveness that led Seattle to draft him in the 1st round in 2018. This led Seattle to reinvest in Penny with a 1 year, 5.75 million dollar contract on a prove it basis. Seattle’s trepidation about a long-term deal is based on the RB market, the lack of willingness of teams to invest in running backs over 26 years old, and Penny’s durability concerns since he has missed 28 of his 65 career games with multiple knee and hamstring injuries. Chris Carson retired but the Seahawks did draft Kenneth Walker III in the second round of this year’s draft. Still, all signs point to Penny getting the first opportunity at the starting job but will that lead to fantasy viability?

The departure of Russell Wilson will impact the efficiency of the Seattle offense. It will likely lead the offense to be more focused on the run as they averaged 27 rushing attempts in the 3 games that Wilson missed last year due to a finger injury, but they only averaged 3.8 YPC in those games as Geno Smith didn’t garner the same respect through the passing game as Wilson. Also, Penny has more career games with under 4 YPC (16 games) than over 4 YPC (15 games). So, that leads to questions about Penny’s efficiency especially in an offense that is likely to see regression in scoring opportunities as well as possessions, as they will likely struggle to sustain long drives. A crucial stat to take into account with Penny’s late season breakout is the quality of defenses he faced. All of the defenses he faced were bottom 12 in the league in rushing defense and of his 6 career 100 yard games 5 of them have come against bottom 12 defenses. Seattle will also likely employ an offense where there is a delegation of responsibilities between passing and rushing downs as Penny only has 23 career receptions and hasn’t shown the aptitude in that role. This will require elite rushing production to be a viable week to week fantasy starter. His most valuable skill, however, and the thing that may mitigate regression in the offense, is his yards after contact average. He averaged 3.1 yards after contact and was above that number in all 6 of his 100 yard games. This attribute led him to be the league leader in YPC with 6.3 and 9 of his 12 career TD runs have come from farther than 10 yards away. So, he doesn’t require a goal line role to be successful and will always have TD potential, but will he be worth drafting on draft day and will he live up to his ADP?

Penny is currently being drafted at RB32 and 90th overall and I believe the answer to be no. This ADP given reports that Penny will be given the opportunity to be the starter will likely only rise going into training camp and the preseason. There are just too many risk factors to justify selecting him above RBs such as Kareem Hunt, Chase Edmonds and Rhamondre Stevenson. All of whom have shown the ability to be solid RB2 and have far less injury concerns. Kenneth Walker III was drafted with significant draft capital in the offseason and will likely be integrated in the offense taking away massive volume for Penny, which was essential to his late season breakout, averaging 20 carries, in those games.  The split in the backfield combined with the lack of historical receiving production leads Penny to be a pass for me. I have him projected to miss 7 games this upcoming season given historical factors and I don’t believe given the likely offensive regression that there is fantasy viability in him even if he were to play a full season. Their inability to run without Wilson in the small sample size gives me pause on Kenneth Walker as well. I would much rather wait a round and take a calculated risk on a back like James Cook. If you can grab Penny around selection 105-110 then I think the value pays off as he can be a serviceable bye week replacement depending on his matchups in those weeks. Recency bias will make his ADP rise as those who won a Championship with him through the last 5 weeks of the season will believe he can recreate that magic. For me, I’m going to be risk averse at that cost and avoid Penny.