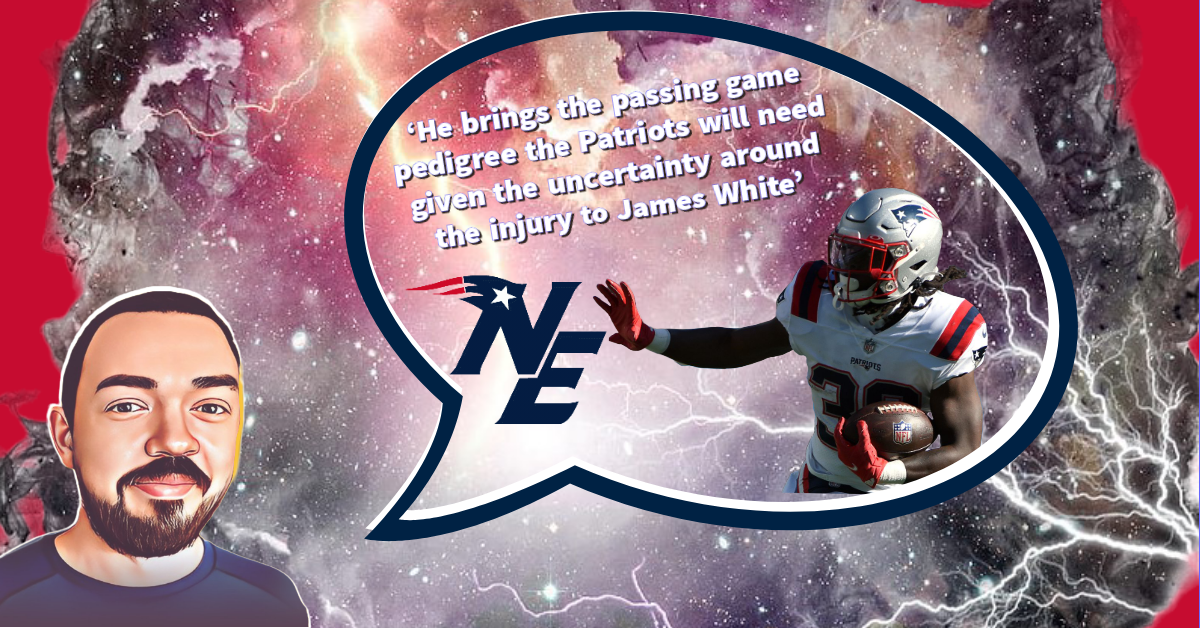 New England backfields have long given fantasy owners nightmares but have also buoyed some RBs to being extreme values, evidenced by Damien Harris last year being a viable RB2 because of his 15 TDs. But the splitting of roles and responsibilities has left many fantasy analysts guessing about who the RB1 is, if anyone. And this leads to a fading of the entire backfield over thoughts of them being unreliable. But early reports this offseason have a contender for fantasy relevance in Rhamondre Stevenson, who came on strong late last season, especially in the absence of Damien Harris, with 2 games of 100+ yards and 2 TDs. He also brings the passing game pedigree the Patriots will need given the announcement of James White’s retirement. He brings ability in the passing game that makes him a contender to take all the snaps, although we know from prior years that some element of RBBC will be there. He did receive 25% of the RB targets last year despite having White on the team and playing less than half the snaps in most games. But where Stevenson truly excels is in yards after contact and the ability to make something out of a play, and given the physical nature of the NE running game, that is paramount. He was 4th last year in yards after contact with an average of 2.7 YAC per rush. This will earn him more of the carries in the coming year. One area of concern for Stevenson is his lack of TD equity with Harris in the lineup. But given the mercurial nature of TD distribution from year to year this is something I project to equal out, with Harris gaining 9 TDs in the coming year to Stevenson’s 8. I also project Stevenson to elevate to 35 targets in the upcoming year, which will be considerable in the conservative NE offense, and a true 50/50 split in carries with Harris. But is he worth drafting given current ADP and could he be an ascending fantasy talent?

His current ADP is RB35 and 101st  overall. Considering my projecting an even split of carries and Stevenson taking a bigger portion of the passing role, this makes him an extreme value over Damien Harris, who is being taken 2 rounds earlier. Stevenson is being drafted in the Kareem Hunt/Chase Edmonds range, both of whom I expect to be extreme values as well considering the upside. Stevenson, like many in this ADP, is a perfect zero/hero RB candidate as other teams will have focused on strengthening other parts of their roster at this point in the draft and you can select a couple of high upside RBs and have the advantage with your early round WRs and TE. Stevenson has top 12 upside if Harris were to ever get hurt and I project him, given his progression in TD equity and passing game role, to be a top 24 RB, even with Harris in the picture. I would start considering drafting Stevenson at the end of the 7th round in a 12 team draft. And you should absolutely prioritize him in the NE backfield. Harris is likely at his ceiling now. He doesn’t have reasonable paths for growth, given metrics, and is a likely candidate for TD regression as it is incredibly unlikely that he replicates last year. And if Harris gets injured, Stevenson is a top 12 RB every week regardless of matchup as the Patriots have consistently shown, regardless of game script, their commitment to the run game and the conservative approach, where Mac Jones thrives. I have picked Stevenson in a number of drafts, as I expect his ADP to rise as the training camp reports become more plentiful about his increased time with the 1st team. The tier behind is full of uncertainty and players much less efficient than Stevenson, with players like Cordarelle Patterson, Michael Carter, and James Cook. This means Stevenson likely represents the last tier of players that are able to be started Week 1, and you will likely get value because other teams that went RB/RB in the first two rounds will be looking to fill out their own rosters. As scary as it may be, draft Stevenson and trust in him in the NE backfield and I predict it will bring you the type of value that wins championships.