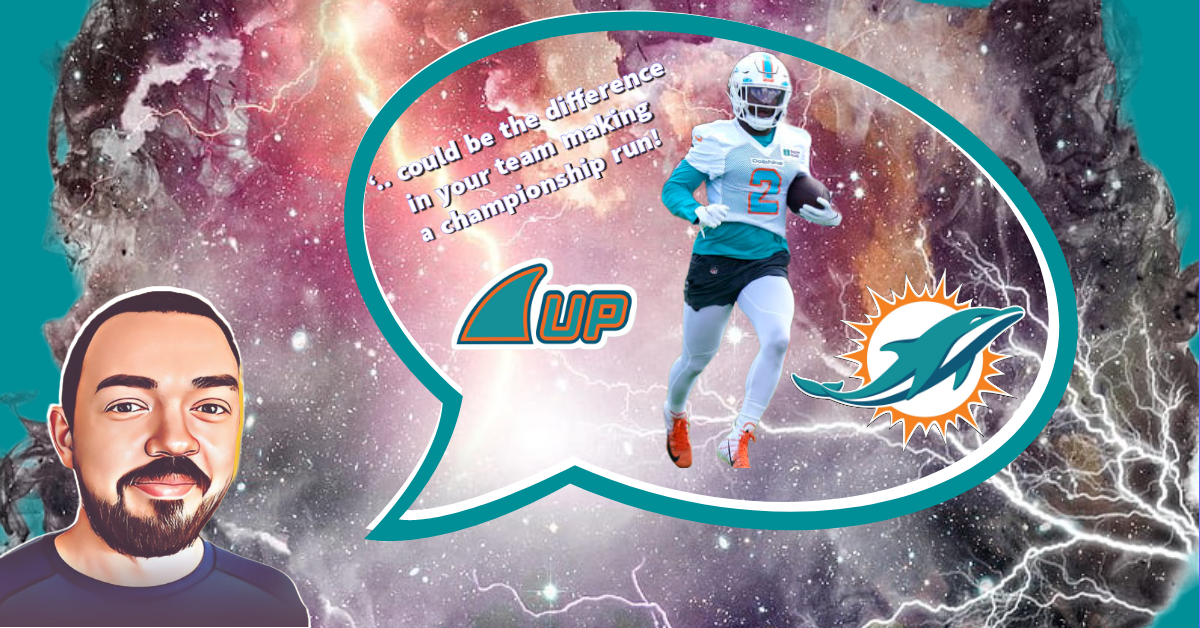 The Miami offense has had a lot of additions and a lot of turnover, in both the coaching staff and the skill positions. An underrated addition within the fantasy space has been Chase Edmonds, who was a valuable RB2 last year prior to his injury, even with James Conner taking away most of the goal line work. Though primarily used as a receiving back, he averaged 5.1 YPC last year on 10.5 attempts per game, if you remove the game with one carry, where he got hurt on the first series. This added to his effectiveness, as a pass catcher, in 2021 he averaged 4 receptions per game and 7.2 YPR, including 7.5 yards after catch. For those who believe that target competition will destroy his value, he had 4 receptions per game in an offense with Christian Kirk, DeAndre Hopkins, and Zach Ertz competing for touches. Some will also point to Mike McDaniel being his coach and his ties to the Shanahan system that has wreaked havoc on many fantasy drafts and seasons. Edmonds is the only back of note with a contract for 2023, in the Miami backfield, and was the first of the backs to be signed. He is also getting the biggest contract, which means, to me, that he will likely get the first opportunity to be the lead back in the system, which will likely look like a 1A/1B system, with Raheem Mostert or Sony Michel being the other half of the tandem. A tandem, I expect to be in a split around 60/40, with the passing downs more heavily skewed towards Edmonds.

The positives of the Shanahan system is, it has made backs like Jeff Wilson, fantasy relevant and every week starters. Leaving significant potential for a back like Edmonds, who I project to get 13-16 touches in an offense that had a decent amount of short area targets and likely would’ve had more targets to the running backs, if not for Myles Gaskin being largely inefficient in that role last year with 4.8 YPR and 3.5 YPC . All of this for a RB who is currently going RB35 and 98th overall per NFC ADP.  A running back who averaged 13 PPR points per game last year can be drafted with an early 9th round pick. He is being drafted in the same range as Michael Carter, who will likely give a majority of his role to Breece Hall, and also in the same range as Cordarelle Patterson, who started off last year as a fantasy darling, but finished the year TD dependent and looking like the physical short yardage touches had worn down the 30 year old RB/WR .

This is the point in the draft where you are typically building your bench and thinking about bye week replacements and handcuffing RBs, who may pay off with a couple of wins during the year with +EV performances. Edmonds provides the value of weekly RB2 production and is an ideal target for zero RB drafters, who are looking for an edge by drafting premium WRs and TEs in the early rounds. This price is not factoring in, likely upward TD momentum moving to an offense without a designated goal line back and the opportunity for targets around the goal line with defensive attention focused on Hill, Waddle, and Gesicki.

I will be targeting Edmonds in most of my drafts in the late 7th/ early 8th round in 12 team drafts with the understanding that as we get closer to training camp his ADP will tick up as people get excited about the RB1 in a Shanahan-esque system. He is in my opinion a steal at current ADP and will be a valuable RB2/Flex option for your team who can contribute 12-15 PPR points on a weekly basis. If he commands the majority of the role, Edmonds could be the difference in your team making a championship run as a replacement in your lineup for an injury or in addition to the WRs and TE that you selected early on in fantasy drafts.

Would Draft Ahead Of  Clyde Edwards-Helaire / Michael Carter / Miles Sander

My Draft Range: Late 7th Round