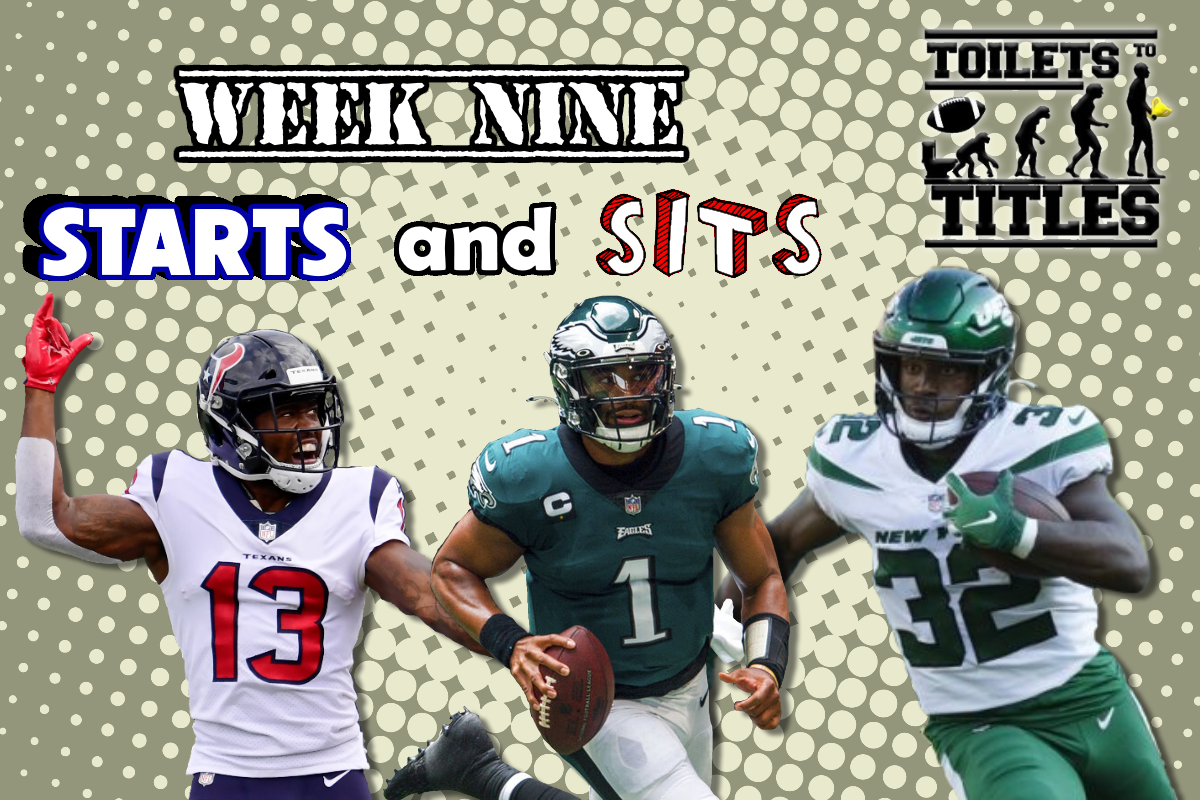 3 things – Davante Adams should be back, the KC defense has allowed the 2nd most fantasy points to QBs this season & Rodgers will want to show the world he is still that dude. Smells like fantasy points.

On paper, this match-up looks like a good one but if you take into consideration the loss of Derrick Henry and the fact that the Titans defense has been below average against the pass, you’ll realize it is in fact not a good one. Stafford will have a night, start him up.

Here’s a stat for you, Elijah Mitchell leads all rookies with 350 yards after contact. The 49ers game plan this week will be to run the ball and keep Kyler off of the field. After Mitchells 3rd 100 yard performance in only 5 games played, expect a heavy dose of him on Sunday.

Great Scott! BS looked like the feature back in Mr. Sanders’ absence last week. Once things got carried away, Jordan Howard took over. The Chargers defense has given up the 6th most fantasy points to RBs. Siriani is going to ride the hot hand, so should you.

Cooks came on strong towards the end of the game last week and now heads to face a Miami team that just allowed Cole Beasley to hit the century mark in week 8. This game isn’t going to be pretty but there should be a lot of points scored.

The Broncos will have to throw to keep up with Dallas this week and Jerry Jeudy should benefit from that. Also, I expect Diggs to spend a lot of time shadowing Courtland Sutton which means Jeudy will have some great opportunities to get open.

Through 8 weeks, Mike Gesicki is Fantasy Football TE4. This week, Gesicki will dominate a Texans defense that is allowing an average of 14 PPR points per game.

After week 8, the Eagles are flying high and The Chargers are in a bit of a tail spin. The Chargers will be up for this one. The Chargers have given up the 2nd fewest fantasy points to opposing QBs this season. Joey Bosa and co. will get after Hurts in this one.

Mac Jones has been playing well but the Panthers defense with Shaq Thompson back from injury and the addition of Stephon Gillmore looked like a different animal in week 8. This one is gonna be a defensive struggle. I’m sitting Jones.

The Cowboys defense has allowed the 3rd fewest fantasy points to opposing RBs this season. The Broncos just traded away Von Miller, I expect Dallas to put up some big points in this one. The Broncos will abandon the run to try and keep up with them Cowboys.

Mr. Carter led all RBs last week with 31 PPR points. Those results may make Fantasy owners think that Carter is ready to be a weekly starter…hopefully 1 of those owners is your opponent this week. The Colts defense just held Derrick Henry to 28/68 & they’ve allowed the 4th fewest points to RBs this season.

In Week 8, Marlon Humphrey got absolutely torched by Jamaar Chase. The Ravens had a bye in week 9 and I believe Humphrey has been doing nothing but preparing for this match-up with Chase’s old teammate at LSU, Justin Jefferson. I may be going out on a limb here but after seeing Jefferson go 2/21 against Dallas, I’m feeling good on that limb.

The Raiders have given up the 4th fewest points to WRs this season. The Giants WRs can not seem to stay on the field. Those 2 factors make me have  0 faith putting any of them into my lineups this week.

The Vikings defense held Cowboys TEs to 2/11 last week. To this point, they’ve held TEs to 24/327/0TDs. I don’t like this match-up for Andrews & I’m sitting him if I have other options.