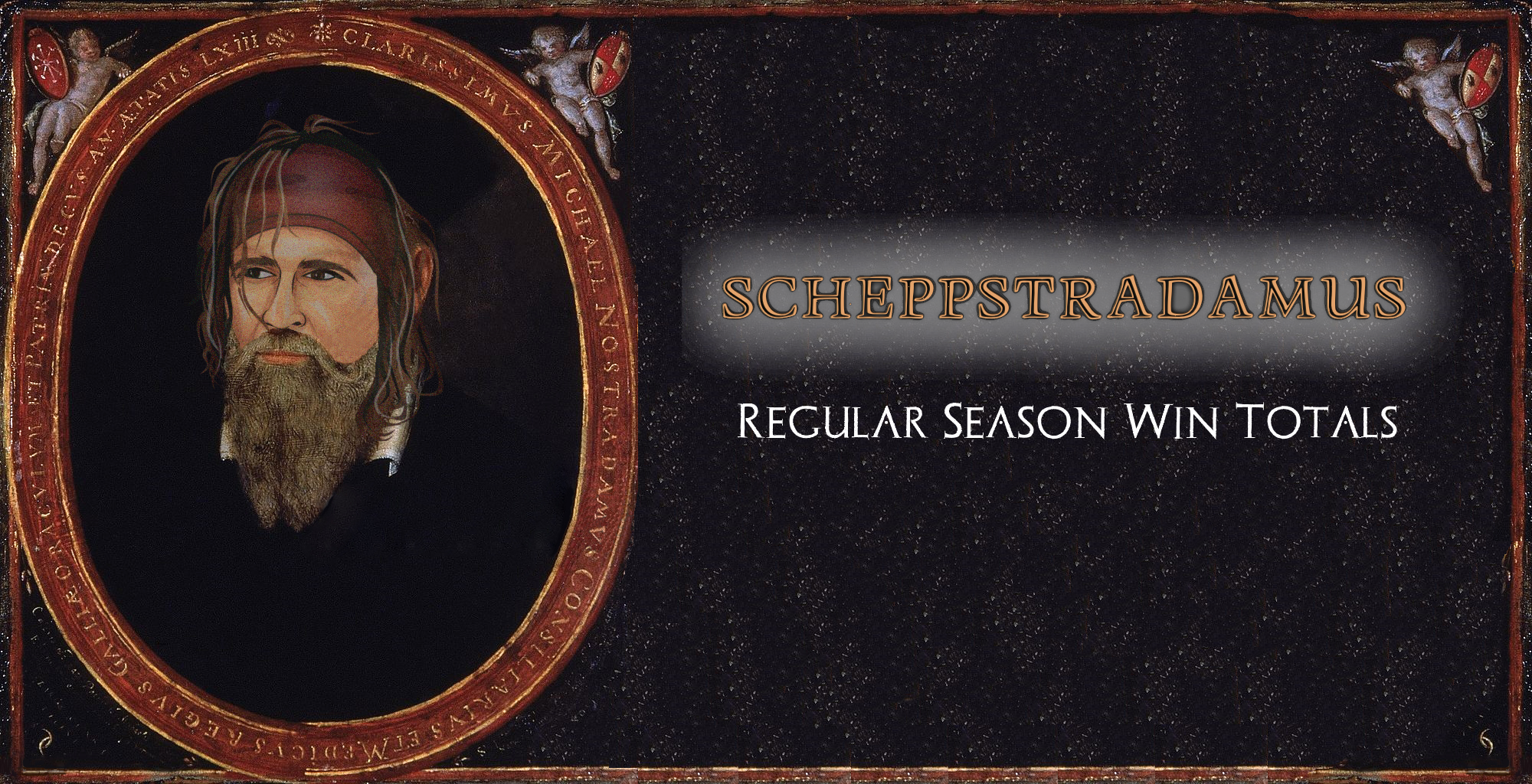 Scheppstradamus and a look into the near future…Regular Season Win Totals.

I wouldn’t say I have a crystal ball but I would say I’ve done my fair share of nailing predictions the last few years. 2 years ago I predicted a Chiefs vs. 49ers Super Bowl, I placed this bet a few days after Mahomes went down with a knee injury against Denver. This bet paid out pretty well and definitely got me some props amongst my friends. This summer, I predicted that the Dallas Cowboys would draft Micah Parsons. Now, I did not place a bet on this but I do have the Twitter receipts to back it up as well as a thread of interactions between Shane Hallam(@ShanePHallam) & myself. I have many other substantial betting victories/NFL predictions over the last few years but the ones listed previously are the ones I am hanging my hat on currently. Alright, enough about my past, let’s begin to look ahead! In this series I’m going to be discussing some NFL futures bets that I really like & hopefully, we can win ourselves some money. Today, we’ll be looking at Regular season win totals.

All of the lines below are from https://www.actionnetwork.com/nfl/futures and were looked at on 07/27/2021.

I expect the Chargers to take a massive step in Justin Herbert’s 2nd year as a starter. With a healthy Austin Ekeler and the addition of Josh Palmer to an already strong WR room, that offense should be humming. A healthy Derwin James should help improve a strong young defense that made massive improvements last year with the addition of Kenneth Murray. Looking at the Chargers schedule, they start out with 3 tough games in a row(@ WFT, Vs. Dallas, @ KC) and I see them emerging out of that stretch with a 1-2 record. After that it gets a bit easier & I predict they win 6 of their next 8. At this point in the season, the Chargers would be 7-4 headed into their final 6 games. Of those final 6, I predict they beat the New York Giants, the Houston Texans, The Denver Broncos & The Las Vegas Raiders. The LA Chargers will finish the season with a 11-6 record & clinch a playoff berth.

I believe that when this season is over, the WFT defense will be looked at as 1 of the top 3 defenses in the league. If that defensive line can stay healthy and if Jamin Davis is as good as advertised, they are going to be playing the type of football that will suffocate opponents. Like the Chargers previously, the WFT schedule opens up with 2 tough games out of their 1st 3 with the NYG sprinkled in between(Vs. LAC, @Buf). They could come out of that stretch 2-1 but let’s say their 1-2. Next, they play the Falcons and Saints who I think will both be fighting for last place in the NFC south. I predict they will win both of those games, which puts the WFT at 3-2. They hit another tough stretch(Vs. KC, @GBP, Vs. Den & Vs. TB). They’ll likely come out of there with 1 to 2 wins but again, let’s say it’s 1. This puts them at 4-5, needing to win 5 of their next 8. 2 of their next 8 games are against the Eagles & I predict Washington sweeps them. Now they’re at 6 wins. They also play the Giants once more and the Cowboys twice. I believe they’ll beat the Giants and split with the Cowboys. Now, they are at 8 wins. With 8 wins, they’ll need to win 1 more game to hit the over. Though I think they will lose to Seattle, I see them beating both the Las Vegas Raiders and the Carolina Panthers. The Washington Football season will finish the season at 10-7 and hitting the over.

In Mike Tomlin’s 14 year career as the Steelers head coach, he has never once had a losing record. His worst finish was 8-8 which he reached in 3 of those years. Now, you’re likely reading that and thinking to yourself, did Schepps make a mistake and really mean to write Over 8.5? To that I answer, no, Schepps did not. One of the main reasons I think the Steelers will have a losing record for the first time in Tomlin’s career is because I think Big Ben is finished. Tom Brady arrived at a youthful age of 43 by limiting his sugar intake and consuming massive quantities of avocados (may be a bit of an exaggeration). Big Ben on the other hand, arrived at an old dilapidated age of 39 by consuming massive quantities of beer and cheeseburgers(no exaggeration). Ben finished last season with his lowest total passing yards since 2012 & he looks like a shell of himself. My prediction is, Big Ben barely makes it through the 1st 8 games, leading the Steelers to a 3-5 record. The Steelers then hand the ball over to Dwayne Haskins who is not a starting caliber NFL QB. At this point, that volatile locker room(see JuJu Smith-Schuster, Chase Claypool & Devin Bush) implodes and things go completely south. The Steelers lose 7 of their next 9 and finish the season at 5-12.