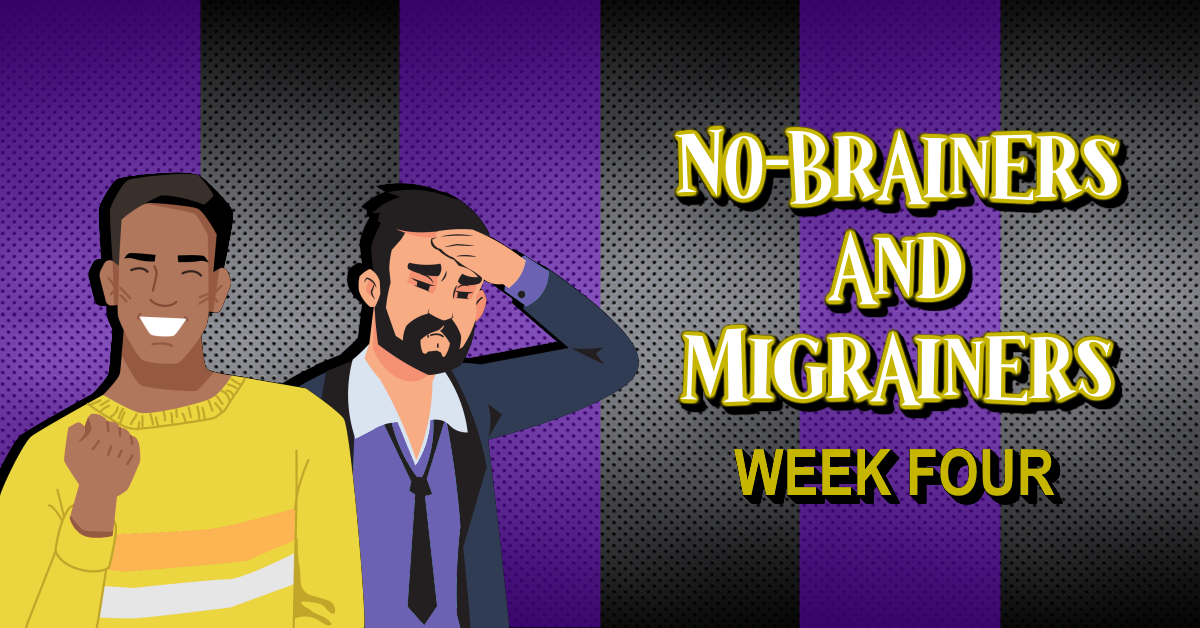 If this is your first time reading my weekly start/sit article, No-Brainers and Migrainers, then you may not fully understand what a No-Brainer is or what a Migrainer is.  There will be starts and sits for both classifications.  No-brainers are, in my mind, ez pz lemon squeezy start or sit decisions in the given week.  Migrainers are the harder, more difficult start/sit decisions that I find to be much more controversial and may cause a headache from contemplation.  It’ll make more sense once you’ve read the article.  Enjoy!

I hate to do this because, well, I have been out on OBJ but he didn’t look half bad in week 3.  He is also the only semi-relevant Wr on the Browns.  Compounding the possible re-emergence of OBJ matched up with one of the league’s worst passing defenses and sounds like fantasy points to me.  The Vikings are giving up a league leading completion percentage and bottom 7 in passing yards allowed and touchdown percentage.  Baushad Breeland and Patrick Peterson are being beaten left and right, up and down the field, week in and week out.  I am definitely not an advocate for once great WR Odell Beckham but even I would get him in my lineup this week.  I consider him a high upside WR2 this week and is better option than most of the flex considerations out there this week.

“Hey Alex, shouldn’t this be a Migrainer because he only got 2 carries in week 3?”  Until I actually started writing, it was but the more I looked at his name on my scribble pad, the more it became a no-brainer.  Sirianni knows he fucked up in week 3 by leaving the flow of the game in Jalen Hurts’ hands with all of the RPO(Run-Pass option) play calls.  It is going to be an overcorrection and they are going to pound the ball all game.  Coincidentally, running the ball against the Chiefs is a team’s best bet.  It slows down the game, keeps the ball out of Mahomes hands, and the Chiefs are the 2nd worst run defenders.  Also, when you give the ball to Sanders enough and there are running lanes, he is bound to rip off at least one long run in Sunday’s contest.  Locked and loaded low-end RB1 with high-end RB1 upside.

Besides his abhorrent use in week 3, I am not tempting fate against Tom Brady as he returns to Foxborough.  I expect this to be a game won in the air.  There is a chance Bill Belichik tries to slow down the game in an attempt to relieve some of the pressure from his rookie QB but I’m not taking that bet.  Tampa should have no problem moving the ball and scoring.  Also, with his reduced usage, Harris is a sit until I see better game scripts for the RB.

AJ Brown and Julio Jones are fighting hamstring injuries and are probably not going to be on the field Sunday.  Well, there goes any faith I had in the Titans passing attack.  Although, the ancillary WRs for the Titans haven’t been bad.  I don’t want to rely on them with any sort of confidence.  The Titans are also playing the NY Jets, on Sunday, which have not been strong on defense.  This game is probably going to be a “give the ball to Derrick Henry 35 times and go home” kind of game.  With that logic, I don’t predict Tannehill to be very involved in this game.  Put him on your bench and thank me later.  There has to be better option in free agency.

It’s tough to go back this well after Kirk and AJ Green both went for 100+ yards in week 3.  The Cardinals offensive pieces are going to have a lot of up and down in their fantasy production because of the way the offense is deployed.  It could literally be any one of the 4 receiving options week in and week out.  Hopkins is still dealing with a rib injury that is likely to keep him limited.  So, the other receiving options are going to have to step up again in a shootout with the Rams.  This is the perfect situation for a playmaker like Moore to get some action and maybe make a big play or two.  It’s going to be hard to rely on a rookie WR in an offense that could have any one of many offensive pieces go off any given week but it feels like a Rondale game.  I’m getting him as an upside WR3.

If Jacobs is back on the field Sunday against the Chargers, then he is a full go for me against the league’s worst run defense.  He has been held two consecutive weeks while he battled back from a toe and ankle injury.  But if they think he’s good to go, then he should be back in all fantasy lineups.  The Chargers are allowing the most rushing yards than any other team going into week 4.  The Raiders would be smart to try and control the pace of play and shorten the amount of time the Chargers offense is on the field by running the ball.  Jacobs should see plenty of opportunities in a positive game script and probably fall into the endzone at least once.  I have him as a low-end RB1 this week.  If Jacobs is not able to go and is ruled out before, then I would be more than comfortable rolling out Peyton Barber as a RB2.

It is hard to get Hopkins out of a lineup if he is going to play but the rib injury really seems to be hampering him.  The Arizona offense has plenty of other options in the passing game and knows how to utilize them.  If Hopkins is questionable, I am trying to find other options.  Some high upside WR3’s might be a better play than Hopkins.  Against the Rams, the Cards are going to need to be explosive and aggressive.  Both of those are hard to be with a rib injury.  Hopkins may be on the field but may only be a decoy in an offense that likes a lot of receivers spread out all across the field.  I am not saying to sit him if the next best option is Corey Davis but I would consider some waiver wire heroes such as Tim Patrick or his own teammate Rondale Moore.  It is always tough to sit a stud like Hopkins when they are expected to be on the field but I would highly consider it.

Sam Darnold and the Carolina Panthers have been on a rampage since Darnold came over from the Jets.  They are 3-0 and have handled all of their opponents pretty easily up until this point but this offense could look a lot different without Christian McCaffery in the lineup.  CMC suffered a hamstring injury in week 3 and without the threat of CMC defenses can key in on Darnold and the passing game.  I love what I have seen from Darnold but this might be a test he fails.  Dallas’ defense has a slew of playmakers that are chomping at the bit for mistakes.  They are riding high off their annihilation of the Eagles last Monday night and are not going to lie down for the Panthers.  Once Carolina starts making stupid mistakes, it will most likely just snowball.  It could lead to a big day from the Dallas defense.   I think Darnold has a good outlook for the rest of the season especially once CMC returns but for this week, I am benching Darnold.