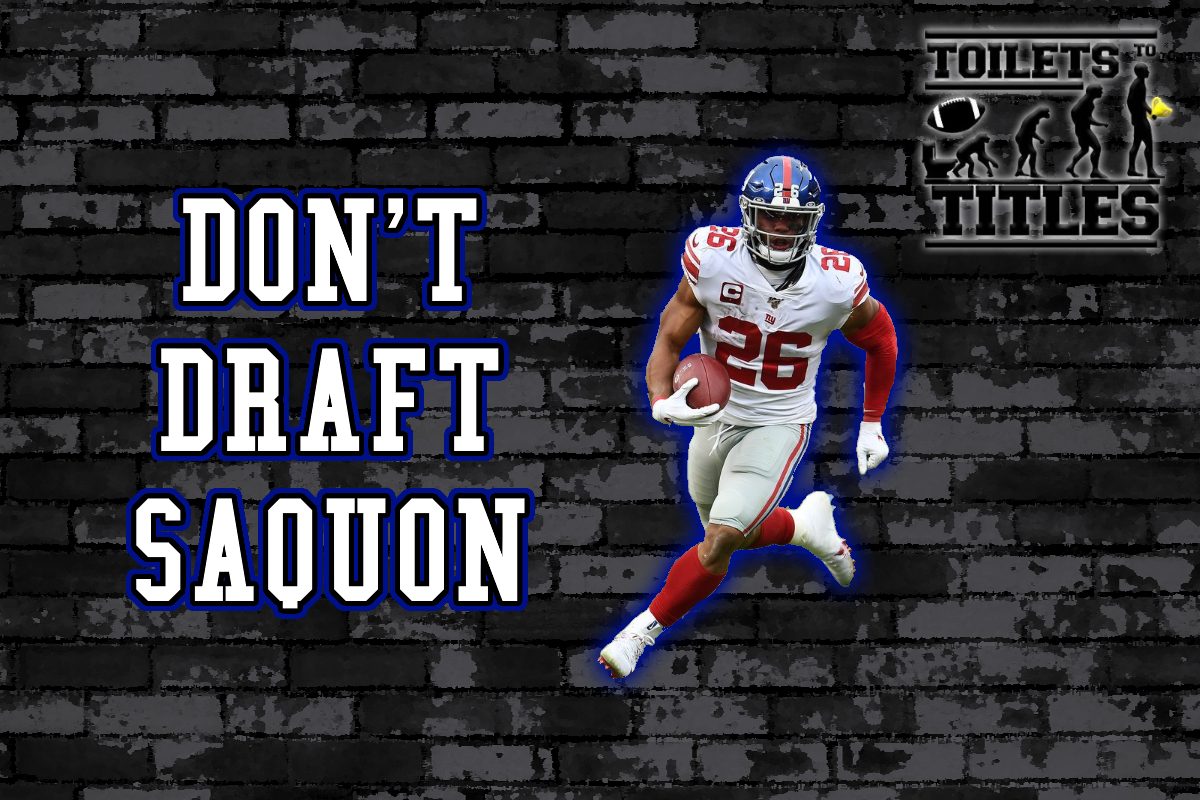 If you’re reading this, you are reading the first article I’ve ever written about fantasy football. If you’re still reading this after that first sentence; you are either a very nice person or are now very intrigued to see how much of a train wreck this article will be. For my ego’s sake, I’m going to assume it’s the former.

Speaking of former things, one of the main questions surrounding 2021 redraft leagues is Saquon Barkley. Will he return to form following a torn ACL? Based on his current ADP and overall rankings by many fantasy experts, it seems the industry is giving a resounding stamp of approval that you should feel very good about nabbing Barkley with that top 5 pick you own. There’s also all of the evidence on paper that the Giants should be a much better team in 2021 than they were in 2020. They signed a legit alpha receiver in Kenny Golladay to a massive contract. They drafted another highly coveted receiver (at least according to Urban Meyer) in Kadarius Toney. They are returning several excellent complimentary role players in Sterling Shepard and Darius Slayton to go along with perennial TE1 hopeful Evan Engram. They also get back starting tackle Nate Solder who opted out of the 2020 season to bookend with the hope that left tackle Andrew Thomas will show improvement from his rookie season last year. Lastly and perhaps most importantly Daniel Jones is entering his 3rd season and 2nd full season in OC Jason Garrett’s system. The sky appears to be the limit for this Giants offense and Saquon as your RB1. Pardon me while I rain on that parade.

Let’s start with Barkley himself and that reconstructed and surgically repaired knee. You might be of the mindset that he should be fine since he tore it in Week 2 of last year. And when the season starts he’ll be pretty much a full year removed from the injury and that is 100% true. He will be pretty much a full year removed from the injury, not the surgery. His surgery was delayed by about a month and a half and did not occur until October 30th, 2020. So when the season starts he’ll be just over ten months removed from surgery. That’s especially worrisome when you consider the history of running backs in their first season back from an ACL tear. Don’t believe me? Take a moment to Google it, I’ll wait. Back already? That was fast! Since it’s fresh in your mind, name all of the running backs not named Adrian Peterson who had Top 10 finishes the year after an ACL tear… Exactly. While Barkley is an all world talent he hasn’t proven himself to be all world in the durability department. His 2018 rookie year was phenomenal (I would know having drafted him with my first round pick and riding him to a championship that year) and while it was impressive to see him gain over a 1,400 total yards in 2019 on a high ankle sprain it’s concerning that he couldn’t stay on the field for 2 of his 3 professional seasons so far.

Now let’s take a look at the reasons why life will not get much better for Saquon this season even if his knee wasn’t an issue, starting with Mr. Daniel Jones. While the Giants have said all the right things about him I can’t for the life of me figure out what made them pick him and now stick with him. Here are Danny’s averages for the last 2 years: 2,985 passing yards (awful), 17.5 throwing TDs (pretty bad), 20 turnovers (not good), 62.2 completion percentage (average? Maybe?), 351 rushing yards (I’ll give you this one, that’s pretty good.). There’s nothing that I see to give me any hope that this is a quarterback who can be enough of a threat to the defense that they don’t just put 10 guys in the box and say ‘Take your best shot Danny boy’.

What’s that you say? Jones performance last year was because he didn’t have Saquon and now that he’s back along with some WR upgrades he’ll be better? Not so fast. In Barkley’s one and only healthy game last year against the Steelers their exact game plan was to load the box and see if Jones could beat them. In that game Barkley had 15 rushing attempts for six yards (you read that correctly) and caught six balls for 60 yards, which isn’t bad but becomes a lot worse when you consider 38 of those yards came on one pass. It’s a small sample size and the Pittsburgh defense was very good. But it’s indicative of what other teams will surely try to do again this year. Sure, it’s possible that Golladay and Toney might give the offense a big boost. But between Jones’ exceptionally poor execution and Jason Garrett’s bland play calling that resulted in the Giants having the 26th ranked offense, according to PFF, it’s safe to say that my hopes for different results in 2021 aren’t high.

Another part of my argument against drafting Saquon comes from what he and the Giants organization is literally saying about his status. The last few weeks we’ve heard repeatedly that they will not put a timetable on his return. Most recently Barkley was asked point blank when we would see him on a practice field again and his answer was “I don’t have an answer, to be honest”. Sure a lot of quotes you hear from organizations and players should be taken with a grain of salt since it’s usually one of three options:(1) spin to make them look and sound better, (2) setting expectations for the fan base, or (3) trying to get the other 31 teams in the league to think something different than what is actually true. I am willing to bet a fair amount of money on the second option that they are most likely trying to set expectations for the fan base. This feels like they want their fans to be prepared for the reality that Saquon might not be on the field right away. And even when he is, he might not be 100% ready to go. That’s not a feeling I want to have about a player I am targeting in the first round or even the second round of drafts.

My final argument I have against drafting Saquon is the fact that he is running behind an offensive line that’s worse at stopping attackers than the Black Knight in Monty Python and the Holy Grail. At the end of the 2020 season PFF ranked the unit 31st (in case you forgot there are only 32 teams). But Nate Solder is coming back so that will help! On paper that sounds great but PFF doesn’t see it that way, in fact, they think it makes them worse! And they have the Giants O-line ranked 32nd (there are still only 32 teams) in their preseason rankings.
On paper the Giants seem like a fantasy goldmine. But every time I take a closer look at them it reminds me of when you take a close sniff of that carton of rice that’s been in the fridge for a few days too long. It looks good and there’s no mould, but something just doesn’t smell right. When it comes to drafting Saquon I’m feeling like Han Solo in the garbage pit on the Death Star: I’ve got a bad feeling about this.