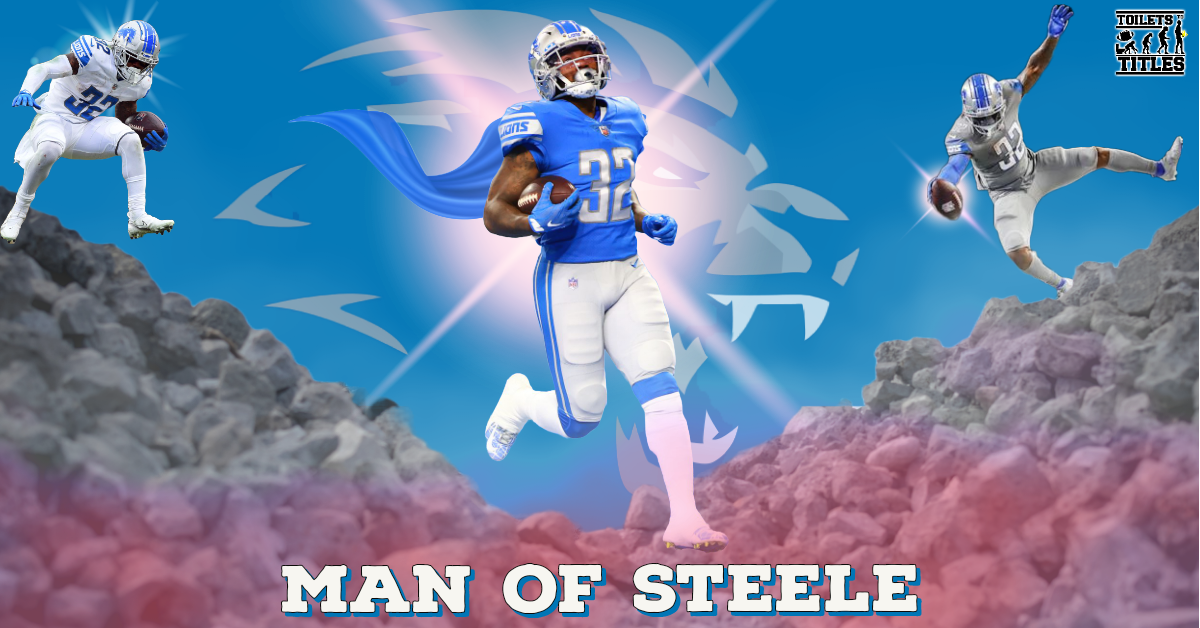 Let’s be honest, as fantasy managers, we’re all a little bit like Lois Lane.

We are all looking for our Superman to come sweep us off our feet and bring us into the fantasy finals. I’m here to tell you who that is, Chucks Man of ‘Steele’. He’s the best player on his squad, and a QBs best friend out of the backfield. He’s smart, he can run, catch, and he’s quick…or some might say, Swift?

D’Andre Swift was selected by the Lions with the 35th pick in the 2020 NFL Draft. Though he has shown the level at which he can produce, in flashes. He hasn’t lived up to the fantasy expectations the fantasy community has had for him thus far. 2020 was an irregular year, covid was running wild, and things just weren’t normal. Even so, Swift made it through camp and the former Bulldog entered the season with some excitement behind him.

Adrian Peterson led the Lions early as their starter, with Swift set to back him up. Swift wasn’t too involved with the Lions rushing game early on in 2020. In the first 4 games of the year, Swift only saw 3 carries per game at 3.5 Yards Per Rush. He did find a role in the passing game, however, catching 13 balls on 16 targets for 124 yards.

As an aging Peterson didn’t impress, Swift started to see more touches over his next 4 games, after Detroit’s Week 5 Bye. From week 6-9, Swift’s rushes went from 3 per game, to 10.5, and he increased his YPR to 4.9 yards. He was still just as involved in the passing game catching 13/18 targets for 5.6 YPC.

Swift impressed, and eventually, the time came for him to be the RB1 for the Lions. He had a successful first start in week 10 vs Washington, notching 81 yards on 16 carries while adding 5 catches for 68 plus a receiving touchdown.

Though the promise was great, Swift landed just as quickly as he took off. He suffered a concussion and ended up missing the next 3 games. He eventually came back in week 14, and after finishing out the year turned his sights on 2021.

Training camp 2021 hit, along with it came a nagging groin injury, that he dealt with throughout camp, and the preseason. However, Swift was able to get healthy and be ready for week one of the season where he was often looked at by Goff and they quickly established chemistry. Grabbing 8 catches for 65 yards and a TD, while adding 11 rushes for 39 yards, was good enough for RB 5 on the week. After no training camp and on his first game, this gave all Swift owners hope. Did they finally find their Superman?

D’Andre Swift is as consistent as you’d want for a player. Swift is capable as a rusher, and he excels at receiving out of the backfield; leading all running backs in targets and receptions per game.

Then comes Thanksgiving. We are all happy, ready for a nice meal with our families, and to watch D’Andre Swift continue what he’s been doing, swooping in and leading us to a weekly victory. However, our hero lands hard on his shoulder and we all gasp. Down goes D’Andre.

Swift suffers a shoulder injury early and is required to miss the rest of the game. Being out the following 4 games and getting a lighter workload for the final two games, the season we all envisioned had disappeared along with our hopes of a title.

Now, what can we expect next? Does Swift have what it takes to come back to build off of his success next season? I believe so.

Before his injury in 2021, Swift was on pace for 1,398 total yards, 9 TDs, and 81 receptions. With a full offseason of preparation, his sophomore year under his belt, and a much-improved offense, and still being the best player on his team, Swift should be able to improve on his numbers straight across the board.

The Lions offense could be fun to watch this year. When Swift went down, and Hockenson missed the season from week 14 on, Amon-Ra St. Brown stepped up in a big way and has now shown he needs to be involved. He is a young, talented WR who can contribute if called upon.

The Lions decided to add another weapon to their offense through the draft with the addition of Jameson Williams. Williams is an explosive addition who can score from any point on the field. He is progressing fine with the ACL injury he suffered last year and should make a full recovery and be ready to go at some point early this season.

It’s a much-improved offense that’s starting to find its identity going into year 2 under new head coach Dan Campbell. Goff has the skill set to support an offense and put up some points. He should be better than last year as he settles into his 2nd year in Detroit. St. Brown looks to take another step forward, Williams recovering well and finding his NFL footing, Swift will have a bunch of pressure lifted off him with much more room to operate.

Don’t overthink trying to figure out this offense. Swift is the best player and will have every opportunity to prove it. He will have his first full training camp, a few preseason reps to shake off any rust, and he will be ready for take-off to lead you all into your fantasy finals.

D’Andre Swift is this year’s Chuck’s Man of “Steele”!

Scheppstradamus and a Look Into The Near Future…2022 AFC Team Win Totals
The Fantasy Side of Things: Deshaun Watson