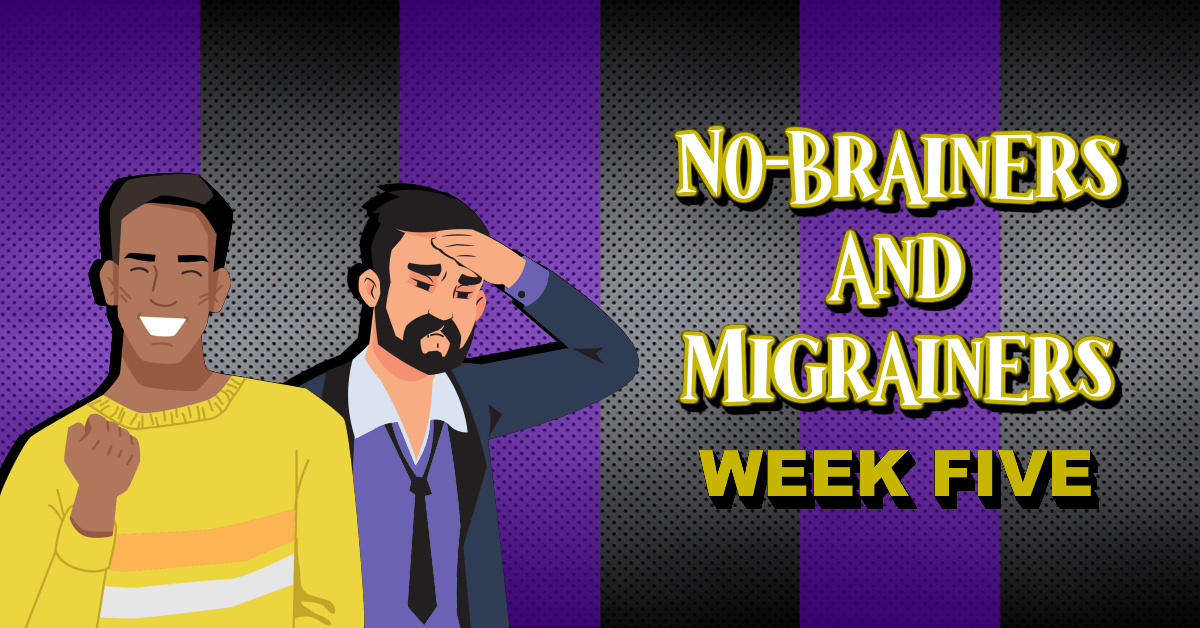 If there is one thing King Henry loves more than stiff arming CBs into oblivion, it is running all over their division rival Jacksonville Jaguars.  Henry averaged, in 10 games played against the Jags, 101.3 yards/game and 1.1 TDs.  Typically, he performs better in the Titans second game against the Jags each year but he is their offense right now.  AJ Brown and Julio are still questionable with hamstring injuries.  So, it looks like another Feed the Beast game.  20+ carries for Henry is almost a guarantee.  I want all the carries for Henry in this easy matchup.

The Bears have been very dependent on the ground game since they are trying to stay as conservative as possible this year.  The Raiders are not a hard matchup for RBs either.  Williams is no slouch either.  He was the fantasy community’s Super Bowl MVP just two years ago.  If Williams was a waiver wire add this week, do not be afraid to get him into lineups as a high upside RB2 or flex play in week 5.

Gaskin saw his lowest percentage of snaps played and ceded the Miami backfield work to non-other than Malcolm Brown in week 4.  Gaskin isn’t the auto start option many thought he would be.  This backfield is definitely a committee.  I want nothing to do with Gaskin unless Malcolm Brown is injured and they are forced to use Gaskin as the lead back.  Couple the limited usage with the fact the Dolphins are playing Tampa Bay and fuhgetaboutit.  Gaskin is benched indefinitely until I see something different happen in that backfield.

Amari Cooper is such a talented wide receiver except, it seems, when he faces a member of the upper echelon of defensive backs.  Unfortunately, the Giants have one of those CBs in James Bradberry.  Amari Cooper in two games last year against the Giants could only muster up 8 catches for 64 yards and 0 TDs.  Yikes!  I love having Coop on my teams but I know when to sit him for just about anybody else.  The only way I am not benching him is unless I would have to start the likes of Marquez Callaway, Nelson Agholor, or Braxton Berrios.  But if I have a WR3 or even a boom-bust WR4, they are starting over Cooper.

It has been rough so far to be an Allen Robinson manager.  He is one of my own most managed players.  So I feel it too.  But this is a get right spot for him and the Bears offense against an actual opponent and not a disheveled Lions team.  Although, the reason I want to keep ARob in my lineup this week is because the Raiders secondary is banged up and playing back ups.  Arnette and Mullen both are most likely going to be out due to injuries.  Raiders have been very competitive and keeping pace or leading in most games this year.  Montgomery, the Bears’ starting RB, is also sidelined due to a knee injury.  I believe this will funnel more of the offense to the passing attack.  I know it is hard to not bench Arob after four weeks of subpar performance but I am advocating giving it one more shot. He should be at least a WR2 this week.

Cordarrelle Patterson has all but cemented himself as a focal part of the Falcons offense but we’ve seen this before with Patterson and eventually teams will get wise, focus on Patterson, and free up the rest of the offense.  I believe this is the week Patterson’s game gets exposed.  The Jets are a pretty soft opponent for RBs and Calvin Ridley didn’t make the trip to London with the team.  Seems like a solid time to get the run game going and use ball control and the clock to the Falcons advantage.  I see Davis ending up with an easy RB2 finish and, possibly, a low-end RB1 week if he hits paydirt.

It is going to be hard to sit Gibson but, depending on players picked up off waivers, a manager may have a better option than Gibson this week.  Gibson is not seeing the type of workload most of us were hoping he would have going into the 2021 season.  McKissic is vulturing redzone, passing down, and 2 min drill work from Gibson all season.  Gibson is also facing the Saints who have been a lockdown run defense allowing only 203 yards on the ground through week 4.  It is a bad spot for an RB in Washington.  I think he barely gets enough running room to finish as a low-end RB2 unless he gets in the endzone.

Jones has been a top 10 fantasy QB this year with the help of his legs and limited mistakes but the Cowboys defense has been a force this year.  The Cowboys’ defense is second in the league for takeaways.  This is the perfect storm of explosive defense versus questionable quarterback play.  He may be able to maintain a relatively high floor but turnovers may lower that floor.  Either way I think Daniel Jones’ ceiling is stunted against this Dallas defense and his floor could be bottom of the barrel.  There is most likely a QB in free agency that could be streamed over Jones this week.