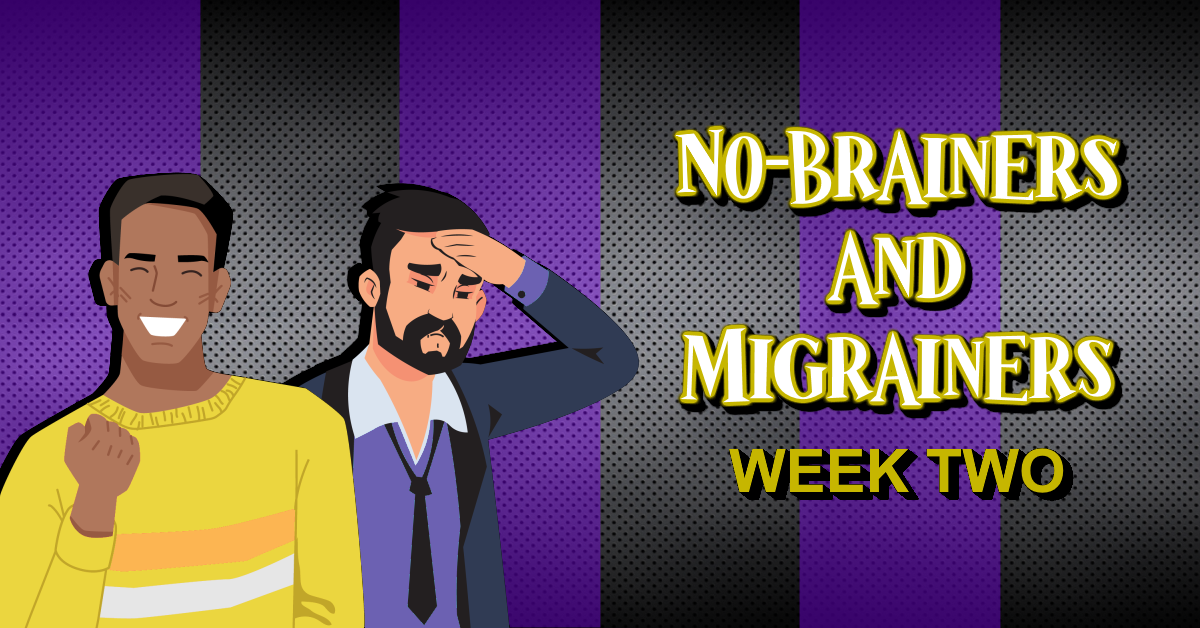 When I started this series, it was going to be a straight forward start/sit article.  BORING!  I want to set this article apart from other start/sit articles.  So I have dubbed the options No-brainers and Migrainers.  No-brainers are going to start or sit decisions that I think shouldn’t be a debate one way or the other and I will indicate whether they are start or sit.  Migrainers are going to be players that give you a headache… er migraine, whatever, while trying to decide whether to start them or let them ride the pine.  I will give you my start/sit opinion on the Migrainers but please keep in mind that even I will have a hard time deciding.  Bear with me as I get acclimated to this change but I would like to keep it interesting and reader faced.  So, if you have some guys that you want me to talk about, do not be afraid to send it my way on Twitter at @AlexO_ff.

P.S. This article will normally come out on Wednesdays so that I can include the Thursday night game but I was laid up in bed all week barely able to stay awake.  So, it’s coming out a bit late this week but in plenty of time for Sunday games.

The Rams are coming off an overpowering win where their offense stole the show.  The defense didn’t need to do much to hold the Bears to just 14 points.  That D-line, and specifically Aaron Donald, who was relatively quiet in week 1, are going to be out for blood and the Colts O-line is not in great shape.  Aaron Donald and the rest of the Rams’ defensive front are going to be all over Carson Wentz all, game, long.  Wentz does not do well under siege either which could lead to some big mistakes and turnovers.  I don’t think the Rams offense will need to do much this game because their defense is going to take complete control of the game script.

Callaway was a disappointment in week 1 against the Packers but because he played badly or couldn’t catch the ball or because he didn’t play enough.  In fact, Callaway was out on the field for 52 offensive snaps which was 84% of offensive snaps.  The Saints just didn’t need to pass a lot as they routed the Packers in the week 1 blowout.  Jameis Winston only threw 20 attempts for 14 completions and 148 yards.  Yes, that’s right 5 passing TDs on only 148 passing yards.  I don’t believe Callaway’s uninvolvement had anything to do with Callaway or his matchup with Jaire Alexander.  It was just because the Saints barely had to do anything on their way to pummeling the Packers 38-3.  I am completely confident that the Saints will need to do much more in week 2 to try and win and Callaway will be part of that plan.  Fire him up in your flex or WR3(he may even end up as a WR2).

It was definitely encouraging to see Mike Davis out on the field last Sunday for 75% of the offense’s snaps.  The Falcons had a game plan that quickly went to shit after a very young and very exciting Eagles team started to runamuck.  The Falcons offense couldn’t get its legs underneath themselves all game and the run game was quickly abandoned.  It seemed in the beginning Arthur Smith wanted to establish the run for those play-actions later in the game but the Falcons quickly found themselves underwater and tried to just sling the ball while playing catch up.  I believe Davis will be fine eventually but not in week 2 against the Buccaneers.  If the Falcons were smart, they would leave the run game at home like the Cowboys did and just try to keep pace with the Bucs.  I have a feeling they are not going to do that but either way I think Davis is going to be ineffective against a stout run defense like the Buccaneers.  If you can, get Davis out of your lineup and wait until they have a chance to get the run game going against an easier opponent, like the Giants in week 3.

Bill Belichick’s soul is replenished every time he gets to scheme up a game plan facing rookie QBs.  This is what he lives for.  Belichick will throw the book at Zach Wilson and the rest of that young offense.  Belichick saw the game film last week and I’m sure he’s salivating over how the Jets offensive line played.  Hint, it wasn’t good and Mekhi Becton is sidelined after knee surgery.  This game is going to be like a gorilla beating up a baby and I do not want Zach Wilson anywhere near one of my lineups.

Sutton’s competition for targets has just been slashed because Jerry Jeudy is going to be out approximately 6 weeks with a high ankle sprain.  Sutton, I think, is the team’s alpha but it’s frustrating he did get much work in week 1.  He is coming off an ACL tear from last year.  So, hopefully he just needs some time to get back into the rhythm of the game.  It’s not easy to roll him after a week with 1 catch for 14 yards but he should get the work if he wants it with Jeudy sidelined.  I am trying to steer clear if I can so I can see if he can handle lead duties again but if you need a flex I would bet on the talent of Sutton.  It’s definitely not going to be easy to roll him out there but the risk may be worth the reward.

I don’t think Ingram’s 26 touches were a fluke.  I think they wouldn’t give him the workload if they didn’t think he was the best back to receive it.  If the Texans are going to give him the work, I will follow the volume on this one.  None of us ever expected or wanted to start a Texans RB but I like lead RBs, regardless of team.  He’s in consideration for a flex play.  Cleveland’s defense is going to be more of a challenge than Jacksonville’s.  So tread lightly.  But between the messy backfields of the 49ers, Bills, and Jags, the Jacobs injury, and the underwhelming performances from week 1, you could do worse than a back with volume and goal line work on his side.

I have no clue what to do with Elijah Mitchell and Trey Sermon.  I would much rather leave them both on my bench than play the wrong one.  With Mostert going down in week 1, it muddles this backfield even more than it was going into the season.  I want to see what Shanahan deploys workload-wise for these backs before I trust either.  Therefore, I may never trust either of them but I’m not getting caught with my pants down with the wrong one in my lineup.  If you don’t have a choice, it is what it is.  Take the shot at their upside in this scheme but I don’t want the migraine.

Sure, Cousins was in a OT shootout with the Bengals last week where he racked up points. Also, we know the Cardinals offense is humming but their defense is a runaway freight train.  The Cardinals defense, led by Chandler Jones and J.J. Watt, is going to have a field day with the Vikings leaky offensive line.  Cousins is another QB that does not do well under too much pressure and I would think there has to be a better option on waivers.  I strongly suggest streaming another QB.  Don’t chase his performance from week 1.  I know you want to but please don’t.  It is not likely to repeat.