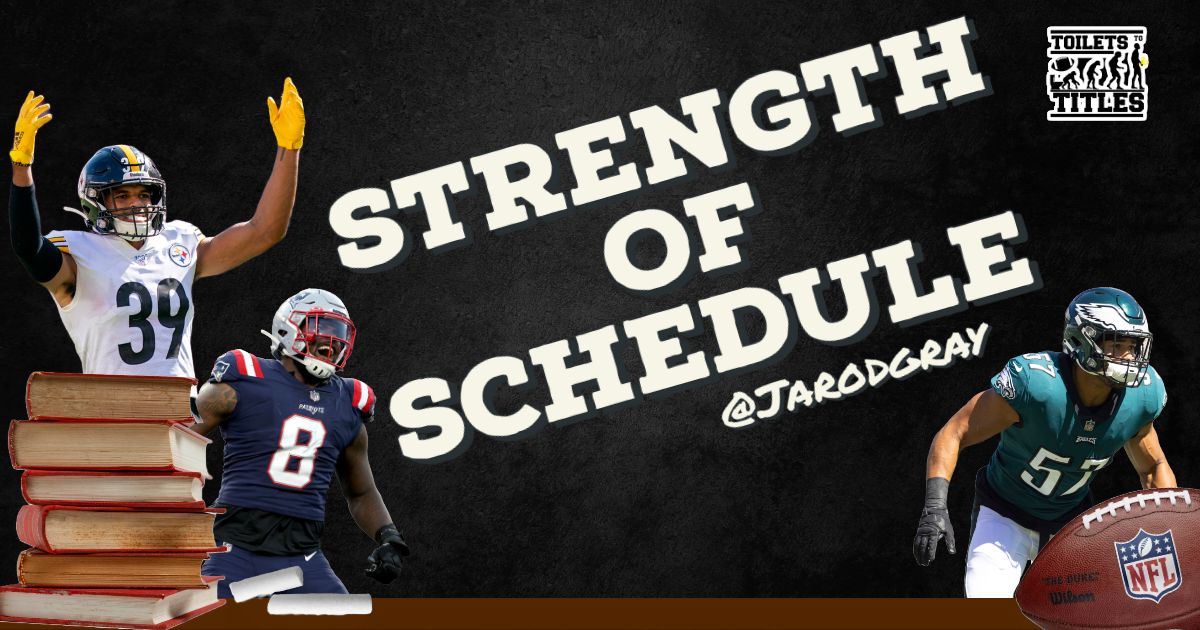 Does the strength of the schedule matter? Some say yes and some say no. I would tell you when it comes to STUDs, they make their own way. However, when it comes to the middle of the pack guys…it means everything! Toilets to Titles Strength of Schedule (SOS) rankings are based on fantasy points allowed by position. #1 is the best/most favorable schedule for that position and #32 is the hardest/least favorable schedule. #1 means that that team’s opponents  allow the most fantasy points to that position (based on the previous year’s data).

Have that RB that is drafted outside the top 15 in ADP but has a favorable schedule like David Montgomery (#1 SOS)? Maybe you have that QB you are high on but he has the most challenging schedule in football based on defenses vs. the QB like Zach Wilson (#32 SOS)! These are the small things we don’t look at, especially in redraft leagues, because someone about whom you are on the fence might have the perfect schedule for you to grab in the mid to late rounds! Are you new to IDP and want a leg up on your league? What if you know everyone is going to grab that top LB on the team but you are worried about the #2 guy? Do they have a favorable schedule for you to do that? Well, if you are a fan of the Eagles then you’re in luck! They have a TOP 5 schedule for linebackers. Wondering how well your defensive backfield will hold up? Well, even though most of your mates are fading the Pittsburgh Steelers because of their quarterback situation, they have the #1 outlook for DBs in IDP. So maybe Minkah Fitzpatrick is just a little more valuable than you thought. What if your team is lacking that linebacker firepower because you didn’t draft one fast enough? The New England Patriots might not have a flashy name but they have the schedule that could allow a player to make a splash. Consider a guy like Ja’Whaun Bentley, who has a low ADP and should be a later grab. But with the best SOS available in the league for linebackers, he could make a sneaky addition to your team.

Bottom line, when it comes to Strength of Schedule, we here at Toilets to Titles have got you covered! Learn how to use the rankings to find the diamonds in the rough that will help take your team to glory.