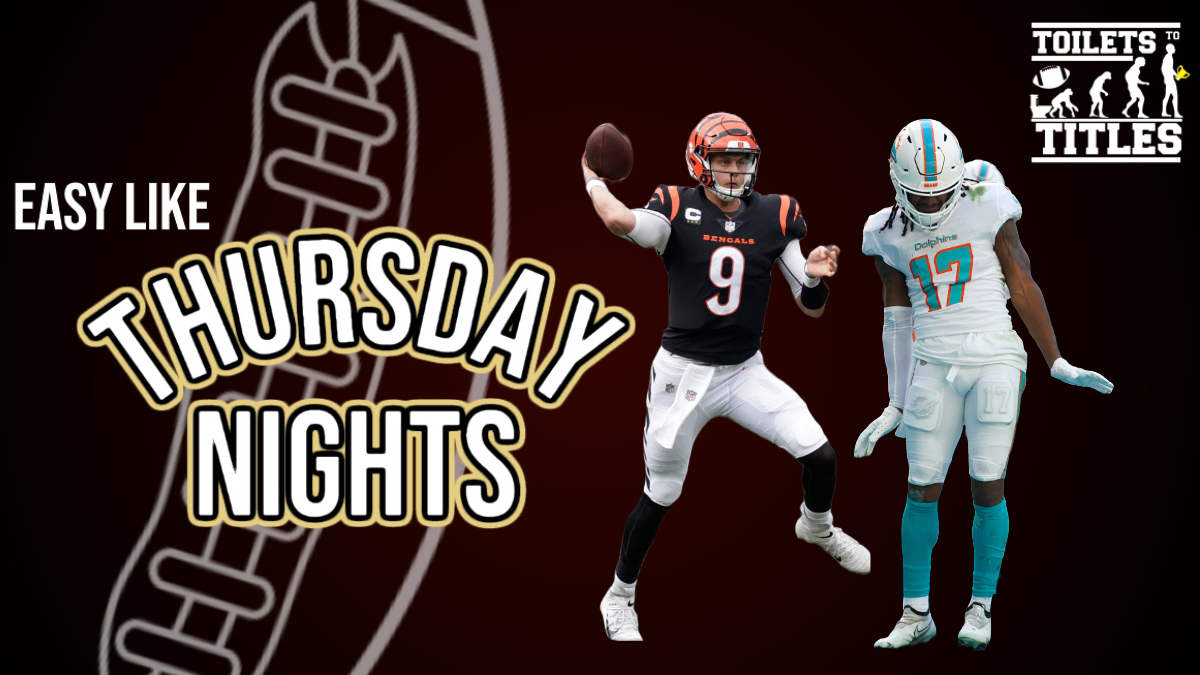 Just three weeks into the 2022 season and the Thursday night matchups have provided more entertainment then most previous seasons. Week four should prove no different as for the 3rd straight week we have an extremely relevant AFC match up as the undefeated Miami Dolphins travel north to take on the defending AFC champions Cincinnati Bengals.

The AFC champs have started 2022 with the stereotypical SuperBowl hangover losing two of their first three games to Mitch Trubisky and Cooper Rush led teams. The good news is the NFL schedule served up the New York Jets for week 3 and that got the Bengals back on track with a 27-12 victory. Fantasy wise and more specifically the single game DFS contest tonight has plenty of juicy fantasy options. I am loving this Miami team and offense three weeks in, however, I am wondering if we will see a bit of an emotional hangover from the Dolphins this week after their emotional defeat of the Bills on Sunday and the short turnaround to the Thursday night game. They also paid a physical cost for the victory as both Tua and Jaylen Waddle left the game banged up and were questionable heading into the Thursday night match up.

The good news is as of Thursday morning it has been confirmed that both Tua and Jaylen will play tonight. From a DFS perspective it is hard to resist Waddle’s 30 targets and 19 catches so far, additionally on Draft Kings he is weighing in $600 cheaper then his partner Tyreke Hill so you can also save a few bucks with Waddle assuming you want one of those two in your line up which you should!!! I also like Chase Edmonds, despite a little bit of an inconsistent start for him he found the endzone twice last week and is relevant in any PPR (points per reception) scoring contest/league as he has 29 touches/approximately 10 per game so far while splitting carries with R. Mostert.

On the Cincy side despite the 1-2 start they are still getting relevant fantasy production from their big 5 (Burrow, Mixon, Chase, Higgins and Boyd). No matter how I seem to approach the single game line up tonight the question ends up being the same… What QB do I trust more for a solid fantasy night? With their salaries being only $200 apart you’ll pretty much have the choice, and as much as I like Tua this year I am going with Joey Burrow tonight (I will actually play a second line up with Tua to mitigate risk and advise the same to you, however, my Burrow line up will be the one I invest the most $$$ in). Because the Bengals need this game more then the Dolphins do I think we see a little Joey Burrow primetime magic to get the Bengals back onto the AFC island of relevance. We are coming off the momentum of cashing both of our Monday night Giant/Cowboy single game line ups on Draft Kings and hope to keep the money coming tonight. Good luck and enjoy the game!