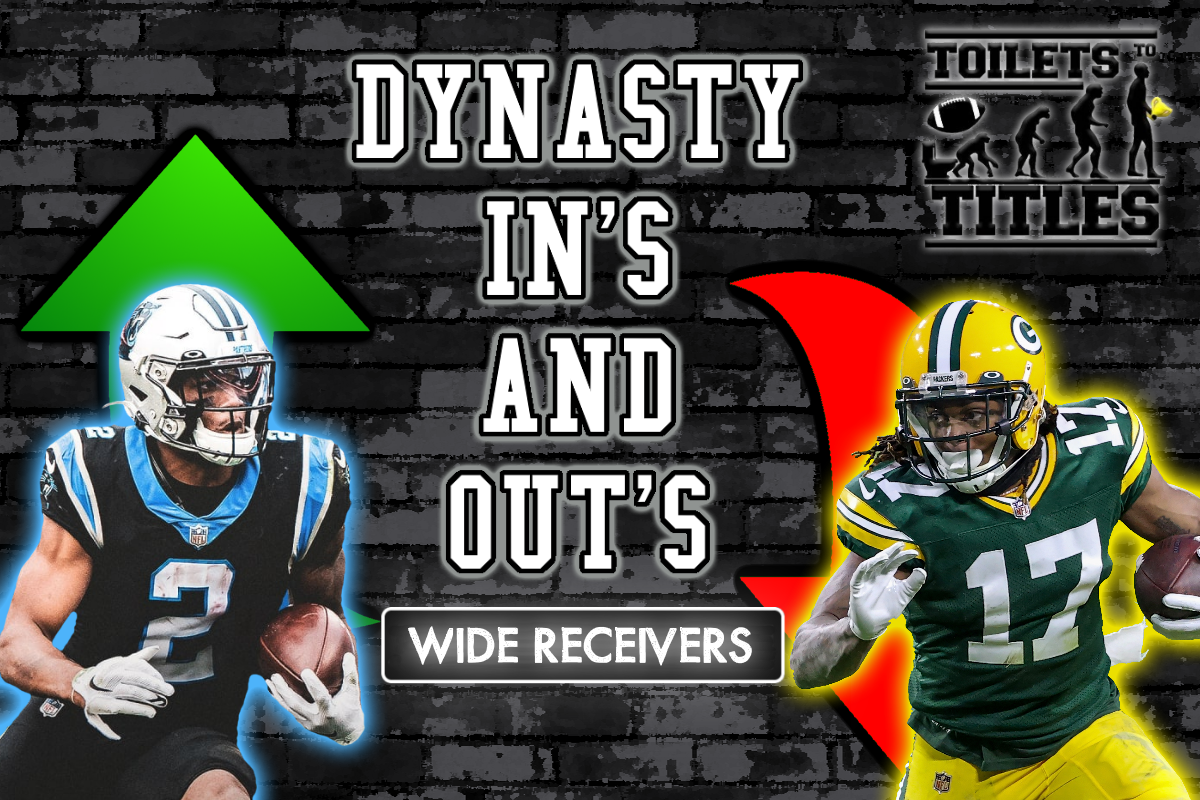 Welcome! It’s part two of Dynasty Ins and Outs. “In’s” being players, I believe, will join their positions top-six in 2022 start-ups and “Outs” being players currently being drafted in the top-six of their position in dynasty start-ups, whom I think will fall out of that top twelve in 2022 offseason ADPs.

I will be using the July 13th superflex dynasty ADP from the fantasy site Sleeper for this exercise. They recently started providing their ADP on Twitter, freely available for anyone who wanted to use it. Given the sample size of the data, I don’t imagine that there is anything better available given the sample size and the mix of both casual and hardcore players. Part one was running backs. This week I’ll be looking at the Wide Receiver position.

Moore had a solid season finishing with 66 catches from 118 targets for 1193 yards and 4 TDs. That meant he finished as the WR 23 overall in full-point PPR leagues.  Pardon the pun, but for the most part, he left his fantasy owners wanting more. Many people were expecting a breakout for Moore into that upper tier of WR’s, and it just didn’t happen. In Sleepers July 13th  ADP Moore is currently going off the board as the WR 15 54.3 overall. That means he is going in the middle of the fifth round. This represents extreme value for a player I think can rocket himself into the top six at his position come dynasty startup season in 2022.

Compared to the QB play Moore had started his career with, we didn’t think it could get any worse with Teddy Bridgewater, but for Moore, that was not the case. Despite a career-high 18.1 yards per reception, Moore finished with a career-low catch rate of  55.9%. It took a while for  Teddy and Moore to get on the same page. Courtesy of the good people over at 4FOR4 Football, we can see that Moore got targeted less on a per snap basis than Robby Anderson and Curtis Samuel through the first nine weeks of the season.

Let’s use one of 4FOR4 Football’s other excellent tools to compare Moore’s splits from weeks 1-9 and then weeks 10-17.

As the above shows, it was a tale of two seasons for DJ Moore. His 15.7 points per game put him right on the cusp of being a WR1 in full PPR leagues. That’s despite the lack of touchdowns.

Touchdowns, you say. DJ can’t enter that elite tier because he doesn’t get touchdowns. If you took away his rookie year when the Panthers threw for 28 TDs, the Panthers haven’t thrown for more than 17 TDs.  Hence with 8 receiving TDs the last two years, he’s caught almost 25% of his teams receiving TDs. I’m not going to dive into Sam Darnold in this article, and he’s had his struggles. However, I believe in this Carolina system with Matt Rhule and Joe Brady, Darnold will prove to be an upgrade over Teddy Bridgewater.

Fingers crossed, we will see Moore used more often in the slot WR role with Curtis Samuel moving on. Which will be fantastic for production. The last reason I’m so bullish on Moore and confident he will be a top 6 WR come dynasty startup season 2022, is that he’s right up there with some of the most productive WR’s in history through his age 21 to 23 seasons. Per the table below from Stathead Football Moore is fifth in receiving yards and tenth in receptions all-time for a player through their age 21-23 season.  He just turned 24 years old in April. For comparison sake, fellow 2018 draft alum Calvin Ridley turns 27 in December. The sky’s the limit for DJ Moore, and I implore you to get in while the price is still mid WR2 cost.

Davante Adams had another colossal season in 2020. In only 14 games played, Adams had 114 receptions on 148 targets for 1374 yards and 18 TDs. I feel like I’m cheating a little bit here because despite the massive production and the clear WR 1 finish, Adams’ July 13th Sleeper ADP was WR5 overall, going 24.1.  so, right on the 2/3 turn in startups. I expect his ADP will inch higher for any startups that occur between now and the start of this season.  Now that Aaron Rodgers and Greenbay have a temporary truce.

I’m not going to dive into stats on why Adams might not produce in future years. The reality is I don’t think that’s the case. I expect Adams to be a productive WR for many years after the 2021 season. Dynasty In and Out focuses on dynasty values. Yes, the young players need that production to grow in value. However, once players reach a certain age, maintaining the value of an elite asset is difficult regardless of how well they produce. Hence, Adams won’t be drafted as a top 12 WR in 2022 dynasty startups.

Adams will be turning twenty-nine years old at the end of the 2021 season. In 2021, he will be entering free agency, if he isn’t franchise tagged. Even if Green Bay slaps the franchise tag on Adams, we don’t know who his QB will be in the 2022 season.  It could be Aaron Rodgers, though Rodgers’ agreement recently put in place with Green Bay makes it seem unlikely. It could be Jordan Love and I hope, for his sake and development, it is. Or he could be on an entirely new team. Even if he bucks the trend like fellow WR’s Deandre Hopkins and Stefon Diggs and maintains elite production whilst changing teams, his dynasty value won’t bounce back to its former heights.

Unless you are a contender, I would be looking to trade Adams whilst he is in the midst of another massive year of fantasy production to cash out for maximum value.  I anticipate that, once the 2021 season ends and we head into the 2022 dynasty offseason, his value will drop precipitously compared to what you could have gotten during the regular season.  If you are a contender and want to trade for Adams, do so with the knowledge that future trade returns are unlikely to match the production he is providing for your roster. Once again, thanks to 4FOR4  & Stathead Football for providing the fantastic tools and stats.