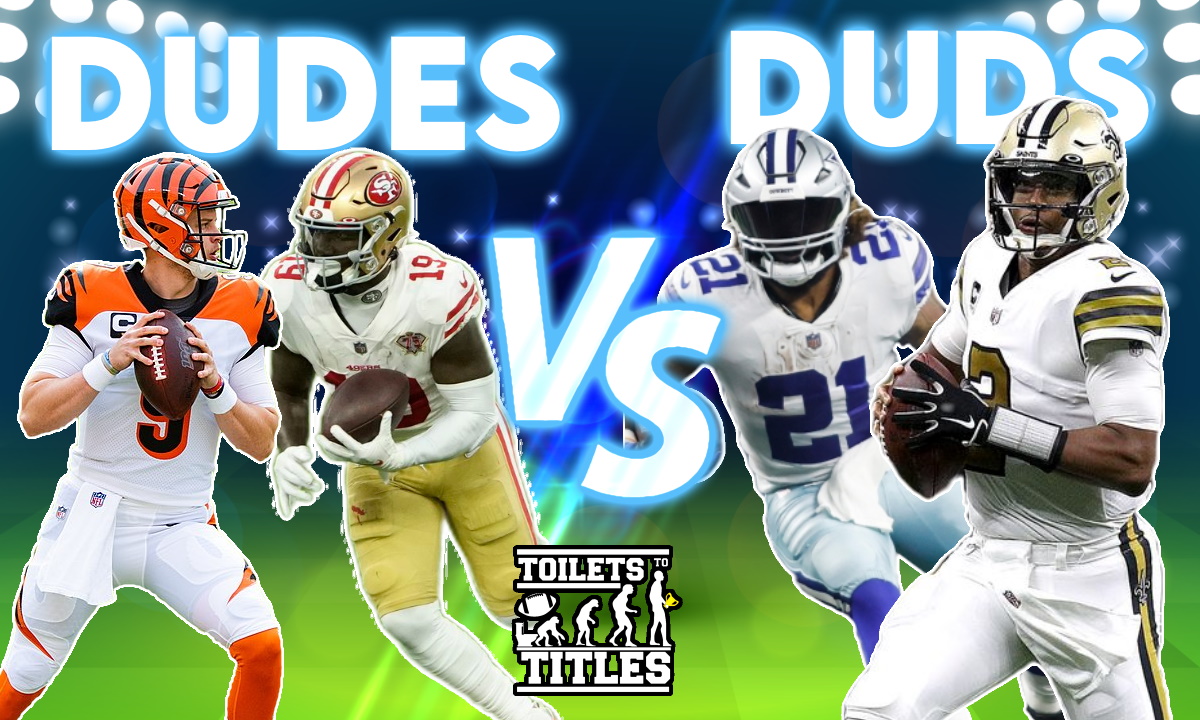 QB – Joe Burrow @ NY Jets
Burrow is due, it’s as simple as that. Over the last 2 weeks of the season, the Bengals have seen 2 very strong pass rushing attacks. Things should get easier this week and Joe Cool will take a big bite out of the apple.

QB – Carson Wentz Vs. Philadelphia Eagles
Carson Wentz revenge game! We all are waiting for Wentz to turn back into Wince, that time will come. The season is still early though and his carriage has not yet turned back into a pumpkin. Through 2 weeks, Wentz is the Fantasy Football QB2.

RB – David Montgomery @ Houston Texans
Monty has arguably been the most slept on running back in Fantasy Football this year. He woke us all up last week with 122 yards on 15 carries. This week he’ll see a Texans defense that gave up 127 yards to Broncos backs in week 2.

RB – Breece Hall vs. Cincinnati Bengals
This is the Breece Hall breakout game. Last week, Breece rushed 7 times for 50 yards and hauled in 1 reception for 10 yards. Over 2 games he’s averaging 5.6 yards per carry. The Jets will ramp up his workload in this one.

WR – Deebo Samuel @ Denver Broncos
With Jimmy GQ back at the helm, I expect the 49ers offense to look a lot like it did in 2021. Deebo Samuel will be featured out wide and out of the backfield and the offense will run through him.

WR – Rashod Bateman @ New England Patriots
Bateman is becoming a big play machine, he’s averaging 27.8 yards per reception through the 1st 2 games of the season. The Patriots will have their hands full trying to contain Lamar Jackson and I expect Bateman to get behind the secondary a few times in this one.

TE – Zach Ertz vs. Los Angeles Rams
I was expecting Ertz to be a big part of the Cardinals offense with Hopkins on the sideline through the first 6 weeks. Week 1, his production was very limited but in week 2, Murray targeted Ertz early and often. Ertz will again see a lot of targets in week 3.

Flex – Noah Brown @ New York Giants
Noah Brown stepped up for the Dallas Cowboys last week, hauling in 5 receptions for 91 yards and a touchdown. The Giants defense will focus on eliminating Ceedee Lamb which will again open up room for Noah Brown to work. That Rush to Brown connection will continue to prosper this week.

QB – Jameis Winston Vs. Carolina Panthers
Winston is banged up and he reverted to pre laser eye surgery Jameis in week 2. Winston was chucking and the opponent was too often on the receiving end of those throws. The Carolina Panthers defense hasn’t played as strong as I expected but I believe they’ll step up against a division opponent.

QB – Trevor Lawrence @ Los Angeles Chargers
Lawrence has definitely taken a step since the last season and he’s looking like the Jaguars investment is going to pay off. This week though, against a rough LA Chargers defense, I’m going to be sitting Trevor. The Chargers are great at flying around the field and swarming to the football, they will be getting after the Jaguars and their offense.

RB – Ezekiel Elliott @ New York Giants
Zeke has yet to receive a full workload this season and has been sharing touches with Tony Pollard. It worked for the Cowboys in week 2 and I expect the touches to be split between Elliott and Pollard again in week 3.

RB – Najee Harris @ Cleveland Browns
Harris seems to be a little banged up and his performance has been struggling. Harris is currently the RB 22 on the season and this week he’ll be facing a Cleveland Browns defense that has been strong against the run and will be doing their best to shut down a division opponent. Defenses are not threatened by Trubisky and things will be tough for Harris until a legitimate passing threat is present.

WR – Terry McLaurin Vs. Philadelphia Eagles
This week, Terry will be seeing a lot of Darius Slay. Slay has been covering opposing wide receivers like their favorite cold weather sweater. I’m sitting Terry everywhere that I can, I expect a stat line of around 3 receptions for about 35 yards.

WR – Ceedee Lamb @ NY Giants
The Giants have played well against opposing WR 1s and Ceedee Lamb is next in line. Lamb struggled week 1 with Dak at the helm and then took a back seat to Noah Brown in week 2. I expect Brown to outscore Lamb again in week 3.

TE – Darren Waller @ Tennessee
The Tennessee Titans have given up the 3rd fewest points to opposing Tight Ends through the first 2 weeks of the season. In years past, I’d likely still start up Waller but now that the Raiders have Davante Adams, they do not have to force the ball to Waller if he’s not open.

Flex – Jeff Wilson @ Denver Broncos
Once again, the Denver Broncos defense is absolutely solid against the run. Through 2 weeks, the Broncos have only let up 131 yards on the ground. Wilson will struggle to find room and he will also be sharing touches with Deebo Samuel.