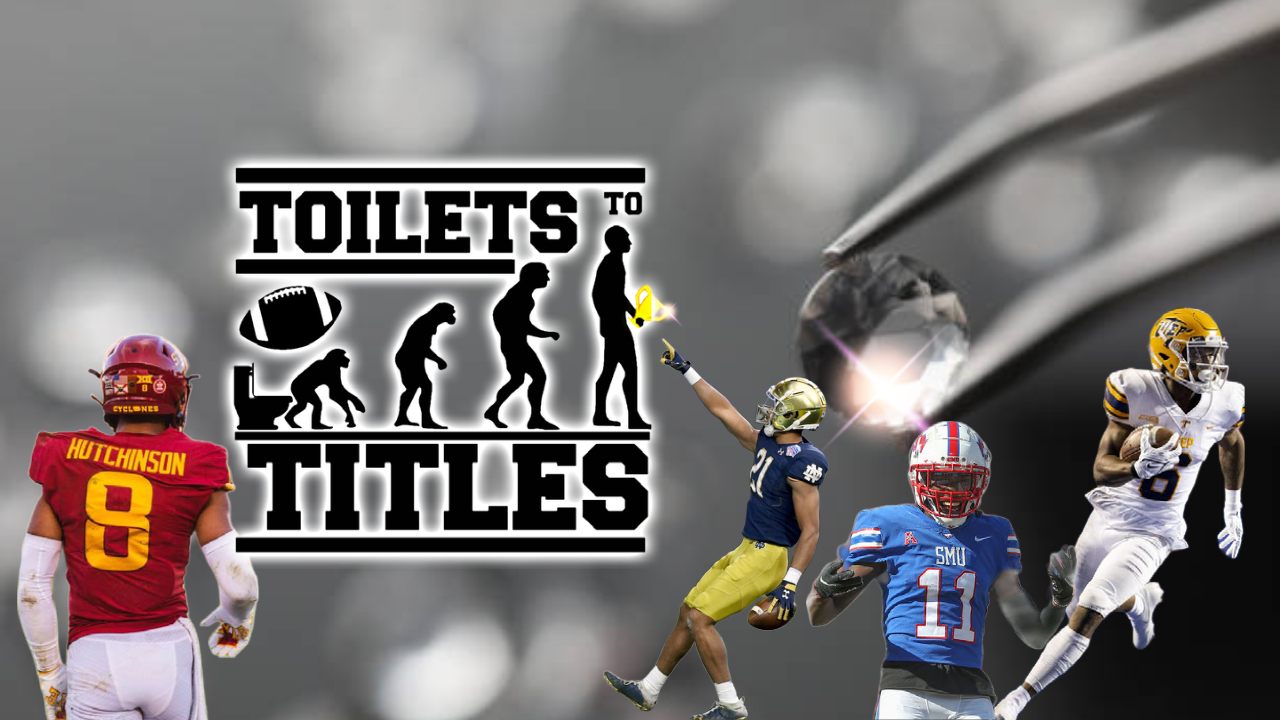 College football is a whirlwind right now with recruits making their commitments and the enormous number of players entering the transfer portal. And with the latest news of Pac 12, Big Ten, and SEC realignment, it is very easy to lose sight of some unpopular names. But don’t worry…your boy has got you covered! I’ve compiled a list of 10 Uncut Gem WRs to keep your eyes on this season.

10. Puka Nacua, BYU: 6’1” 210 lbs – Nacua was a 4-star recruit coming out of high school, known for stretching the field with his great acceleration. His ball awareness is elite when tracking the deep pass and he has great hands. Unfortunately, he struggled to see the field in his first two seasons at the University of Washington, accumulating only 16 receptions for 319 yards and 3 TDs before his transfer to BYU. Nacua found his form with the Cougars, finishing the ’21 season with 44 receptions for 805 yards and 6 TDs, not to mention an eye-popping 18.7 YPC and a nice connection with QB Jaren Hall. Be prepared for Puka to continue to see his targets and numbers rise in ’22.

9. Rashee Rice, SMU: 6’1” 189 lbs – Rice is an elite route runner with top-end speed (4.3s 40-yd dash) who is extremely dangerous in the open field. In each successive season at SMU, Rice has increased his total TDs, total catches (by at least 20), and averaged 10.5 YPC over those three years. Rice should take over the WR1 role now that Danny Gray has moved on to the NFL. Rashee Rice Breakout Season is coming in ’22.

8. Renard Bell, WSU: 5’8”165 lbs – Bell is a savvy route runner with incredible field awareness and strong hands. He is an absolute ballhawk downfield who can track it over either shoulder very well. Bell only played four games due to injury in ’21, but led the PAC-12 with 8.2 receptions per game and was 3rd in YPG with 97.5. Bell will have the services of IMG Academy transfer Cameron Ward at quarterback.

7. Mitchell Tinsley, PSU: 6’”1 205 lbs – After an elite season in ’21 which saw the Western Kentucky WR go for 87 receptions, 1400 yards, 14 TDs, and 16.1 YPC, Mitchell Tinsley will be taking his talents to the BIG Ten. The newest Nittany Lion was a 4-star recruit out of Lee’s Summit HS. Tinsley is phenomenal at high pointing the ball and is a strong physical WR. Both his contact balance and run after the catch are elite. Tinsley is the perfect compliment to Parker Washington and could even surpass him as WR1 for the Nittany Lions.

6. Cornelius Johnson, MICH: 6’3” 211 lbs – Johnson is a strong, solidly built WR with good hands and astute route running. The former 4-star recruit doesn’t possess breakaway speed but is quick and shifty, which was apparent on his 87-yard stop-and-go TD route vs. Northern Illinois. Johnson does well in the slot and on the outside and can make plays all over the field. It is not out of reach for Johnson to triple his ’21 touchdown total (3) in ’22.

5. Lorenzo Styles, ND: 6’1” 186 lbs – By the end of the ’21 season, Styles had earned the trust of HC Brian Kelley as his targets increased over each of the last four games, including an 8-reception, 136-yard breakout performance against Oklahoma St in the Fiesta Bowl. His elite athleticism allows him to pull away from defenders with ease and get open downfield. With injuries to RBs Jadarian Price (Achilles) and Logan Diggs (shoulder), the Fighting Irish should look to air the ball out and get their most versatile player the ball!

4. Jadon Hasselwood, UA: 6’3” 202 lbs –  Hasselwood was a 5-star recruit out of Cedar Grove HS in ’19 who could not live up to the hype due to consistent health issues. However, when targeted, Hasselwood had an avg of 15.3 YPC and his QB had a rating of 112. In ’21 Hasselwood saw more action but was once again in and out of games due to injuries. Now finally healthy, Jadon is ready for that breakout season in ’22. His size and quickness off the line allow him to effortlessly break press coverage while his crisp route running makes it easy for him to take advantage of open seams. The change of scenery from Oklahoma to Arkansas could be just what Hasselwood needed.

3. Justin Shorter, UF: 6’5” 228 lbs – The former 5-star and top 10 recruit is another WR that just hasn’t yet lived up to expectations, but boy does ’22 look like the year Shorter breaks the door down. Shorter returned as the lead WR in Florida and has taken this season seriously! As wide receiver coach Keary Colbert touched on “…that guy works his tail off, I’ll tell you that! Every single day, every single play. Sometimes I gotta slow him down.” Shorter has top-notch downfield ability blended with fast feet and elite route running. Pair that mentality with healthy QB-play from Anthony Richardson and we are about to see in ‘22 what all that top 10 talk was about.

2. Xavier Hutchinson, ISU: 6’3” 200 lbs – ‘X‘ kicked in the door last season with 83 receptions, 987 yards, 5 TDs, and a cool 12 YPC. He has averaged 73 receptions and 880 yards over the last two seasons. ‘X’ is a legit vertical threat who can go up and attack the ball. Sprinkle in solid route running, the ability to sell routes, and top-notch field awareness, and ‘X’ is primed for another superior season.

1. Jacob Cowing, UA: 5’11” 170lbs – Cowing’s middle name should be ‘Big Play’, as he has averaged 17 YPC over three seasons at UTEP. Entering his senior year, Cowing is taking his talents to ‘Zona to pair with Tetairoa McMillian (WR) and, with the Hawaiian gunslinger Jayden De Laura at QB, Cowing should see his numbers increase with ease! Cowing has fast feet combined with timely head movement to work swiftly in the open field. ‘Big Play’ Cowing will have his elite stop-n-go body control, quick burst (4.4s 40-yd dash) ability, and sharp cuts in-n-out of breaks on full display this year at ‘Zona.