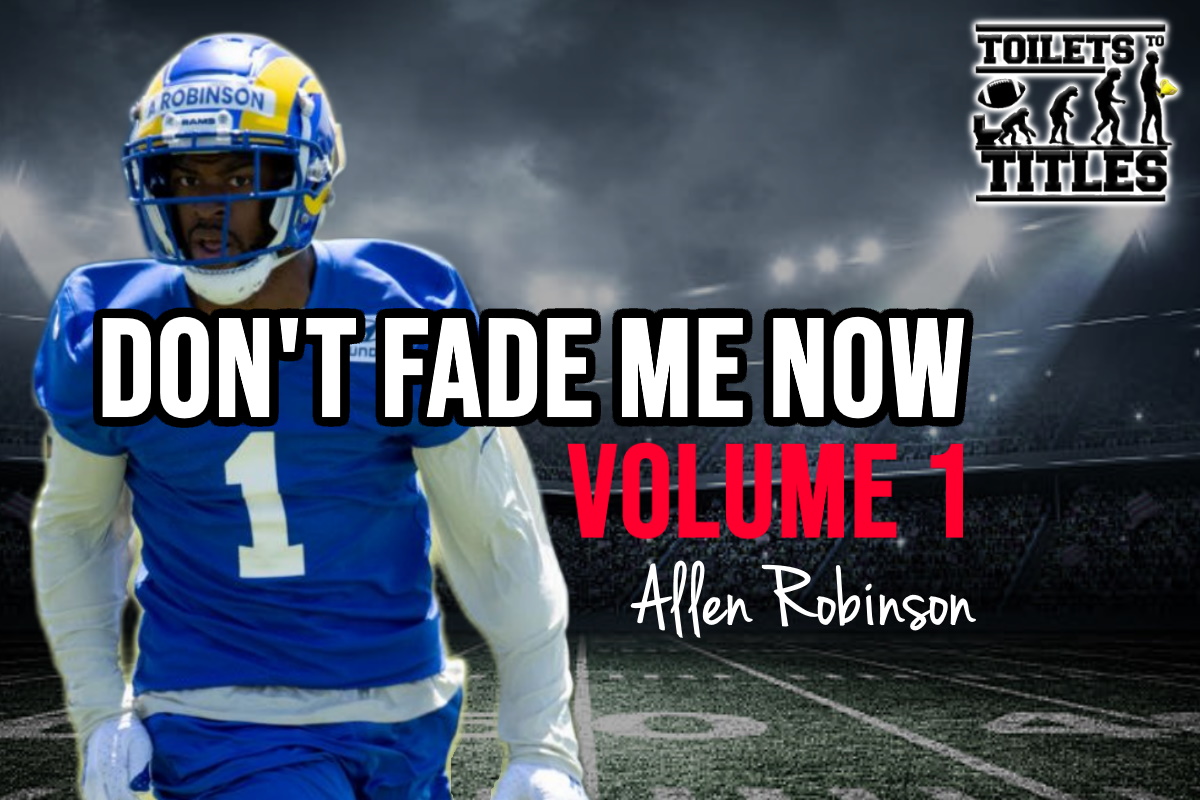 New Year. New Team. New Allen Robinson?! I don’t think so. If anything, I think we’ll get the chance to see some of the old Allen Robinson. Some prime 2018-2020 Allen Robinson. Being the new WR off-season addition to the Rams, Robinson is set up to be their #2 WR heading into the season.  Since, Robert Woods has been traded to the Titans and Odell Beckham Jr is still currently a free agent. Do not fade Robinson, I fully expect him to hit the ground running in LA.

When it comes to a bounceback season, Allen Robinson is a sure fire bet. He’s coming off career lows last year in almost every category. His final line? 48 receptions, 410 yards, and one lonely touchdown in 12 games. So it’s easy to assume he probably feels like he hit the lottery after going from the Sad News Bears in Chicago to signing with the NFL’s top offense in the LA Rams.

The Rams will once again be a powerhouse offense. After winning the Super Bowl, last year Stafford and friends will be looking to chase yet another Lombardi Trophy. LA’s massive haul in talent will help that. They are stacked with superstars. And boy oh boy do they have a superstar QB.

Matthew Stafford had himself a heck of a season putting up 4886 yards, 41 TDs, and 17 INTs while completing 67.2% of his passes. Stafford is tough as nails and has a cannon for an arm. He was 1st in passing attempts that traveled 30 and 40 yards and finished 2nd in passing attempts of 50 yards. He finished 10th on deep-ball completion percentage with 42.3%.

Though the deep ball is nice, I see Robinson being more of a red zone threat for the Rams. Stafford completed just under 56% of his passes in the red zone, throwing for 473, 32 TDs, and just 1 INT. With Robinson being a bigger WR, he’ll be a perfect addition to help continue the red zone success.

He has been a redzone favorite over the past 3 years. Even after a down year last year, Robinson was still seeing an average of 40.9% of red zone targets, pulling in 53%, while adding 3.6 touchdowns. Stafford does have many targets to throw to though, none more favored than the Super Bowl MVP, Cooper Kupp.

Kupp gets all the attention in this passing attack. He took full advantage of his opportunities when Robert Woods went down for the season during practice leading up to week 10. Kupp’s final line? An insane 1947 yards, 145 receptions, and 16 TDs. Anyone capable of these numbers is sure to draw some extra attention.

Even with all of that, I feel these two will be a perfect compliment to each other. Kupps catch and run ability alongside Allen who can go up and get it, can both find success in this offense. It’s no doubt Kupp is still the man in this receiving core, but I feel good about Robinson.

Robinson was once looked up to as a fantasy WR1, and with great reason. When Mitchell Trubisky was at the helm for the Bears, Robinson finished 2019 and 2020 in the top 12 for fantasy receivers. Averaging 1,050 yards, 85 receptions, 5.6 TDs in the past 3 years, and is still 28 years old, I think Robinson is going to step right into this Rams offense and produce at least with similar numbers.

I think a current ADP of 58.4 is a fair price. He is the 22nd WR off the board and has the potential to outperform expectations. A safe floor with a high ceiling. Even after a season to forget last year, you all should sleep comfortably at night with Allen Robinson on your squad.

2022 Running Back Redraft Rankings
SFB12 Land Mine or Gold Mine