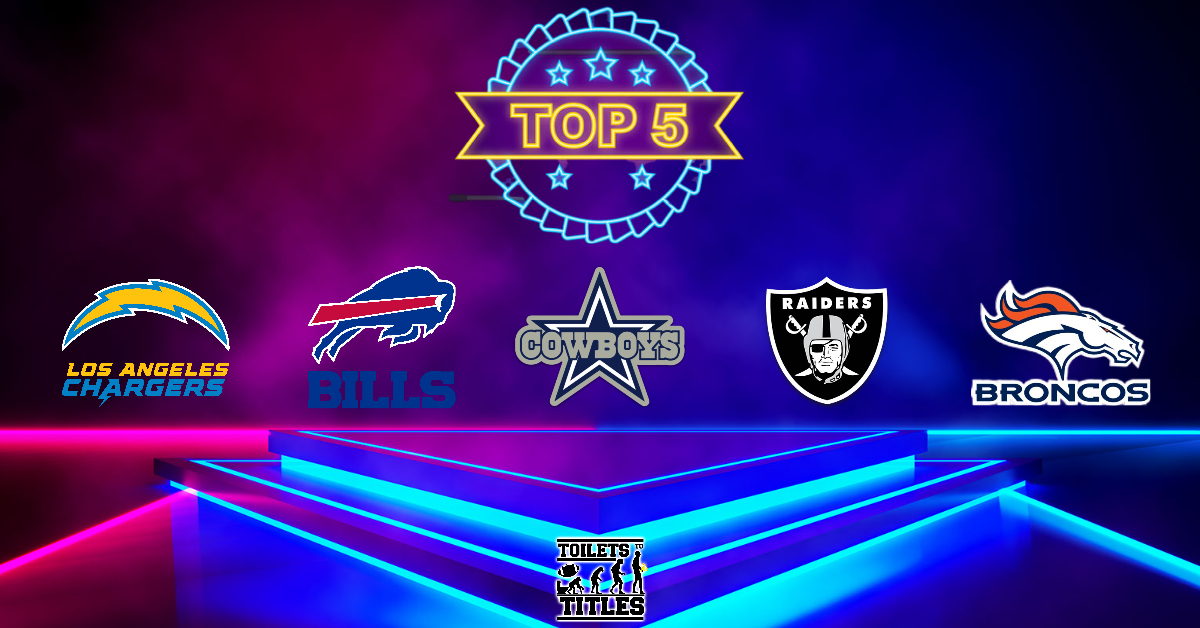 Last year, there were plenty of high-powered offenses in the NFL. You were able to look ahead at the start of the season and just see which games were primed for high explosive play from these great NFL teams, and the season didn’t disappoint.

You saw teams like the Dallas Cowboys and the Tampa Bay Buccaneers score over 30 points a game on average. You saw Tom Brady and Matthew Stafford throw for over 40 Touchdowns. A record-breaking season from Cooper Kupp at the wide receiver position and Derrick Henry running through walls before his injury.

The Dallas Cowboys were last year’s leaders in total yardage in the NFL with 6,919. The Tampa Bay Buccaneers were a close 2nd with 6,901. The Bills, Chiefs, and Chargers round out last year’s top 5.

Several teams gained new elite talent this year. Russell Wilson is now the new quarterback for the stacked WRs in the Broncos offense, Tyreek Hill will now be paired opposite Jaylen Waddle in Miami, and Davante Adams will be catching passes for the Las Vegas Raiders this season. Oh, how things can change in one year.

Below I break down my top 5 offenses in the NFL. Will we have new faces in the top 5? Can the Dallas Cowboys repeat as the NFL’s top offense or will someone else come knocking, looking to claim the top spot? Let’s dive in.

Last year, the Denver Broncos did not impress anyone on the offensive side of the ball. Do not get me wrong, they have some great talent. They have a talented trio at wide receiver that all NFL teams would love to have. Not to mention in the backfield two very capable running backs in Melvin Gordon and Javonte Williams, who each put up over 900 yards on the ground last year. So how did the Broncos manage to finish 23rd in points per game? You’re probably already thinking about it, the quarterback play. With a combination of Drew Lock and Teddy Bridgewater, the Broncos offense found themselves punting and turning the ball over on occasion. This past offseason they tried their best to fix their weakest position, and I think it’s safe to say they’ve done exactly that when they traded for a Super Bowl Champion in Russell Wilson. Even with a lackadaisical offensive line, with a leader like Wilson, who could throw for over 4,000 yards and who has, as recently as 2020, thrown for 40 touchdowns, you can expect this Broncos offense to put up plenty of yards and points in a fire-powered AFC West. Not only will they be a top 5 offense, but they will be the most improved.

If you sat down to read this article and didn’t think Chuck Steele would put the Raiders in his top 5 offenses you must not know me at all! Last year the Raiders finished 11th in yards per game and in the bottom half of teams at 18th in points per game. It was a year filled with mainly field goals, terrible offensive line play, coaching issues, off-field distractions, and an injury to a key player in Darren Waller.

Things are looking different in Las Vegas this year though. It’s no longer the Renfro-Show. With new head coach Josh McDaniels, who in his first offseason added DaVante Adams to the offense, this can become an extremely explosive team. You can make a case that Adams is the best wide receiver in the NFL. Carr and Adams have teamed up once again after playing in college together. Darren Waller will be back and fully healthy to start the season, ready to add another 1,000-yard campaign to his belt, and osh Jacobs will be coming into the season looking to earn a new contract, somewhere.

This is a new team with a new identity. Anyone who sleeps on the Raiders will soon wake up. They are hungry and determined. It’s time to take the Las Vegas Raiders seriously. No surprise we have another team in the AFC West, with the Raiders coming in at #4. Is there room for another?

The Dallas Cowboys were last year’s top offense in the NFL in points per game and yards per game. Dak and the boys drove down the field possession after possession, punching it in both through the air (40 TDs) and on the ground (15 TDs). The team had a few key departures this off-season, though. They lost La’el Collins on the offensive line through free agency and Amari Cooper, who was traded to the Cleveland Browns. However, they drafted offensive lineman Tyler Smith in the first round of the NFL draft. Measuring in at 6’6” and 332 pounds, this massive being fits your typical Dallas Cowboys offensive lineman mold and is going to provide much-needed help by plugging a hole in a porous offensive line. They also filled the void left when Amari Cooper was traded, drafting Jalen Tolbert in the 3rd round. Dak isn’t going to let last year ‘slide’. After throwing for 4,449 yards, 39 touchdowns, and 10 interceptions last year, the leader of the Cowboys will look to keep the firepower going at full force. He takes control of the offense and can finish off any drive. With a healthy Zeke, an explosive backup in Pollard, who they plan on using in multiple ways, and CeeDee Lamb taking over the reins at WR1, the Dallas Cowboys will still put up yards and points. The Big D in Dallas stands for a dominant offense.

“Devon, GET THE TABLES!” The Bills are good. So good that they have Bills Mafia jumping through tables. After a thrilling, yet heartbreaking, 42-36 overtime defeat to the Chiefs in the divisional round last year, Josh Allen and company are going to be entering this season looking to take it one step further. The Bills have a few new faces on the offense, upgrading the guard position with veteran Rodger Saffold. With Cole Beasley and Emmanuel Sanders leaving, the Bills also added Isaiah McKenzie and Jamison Crowder both of whom will be aiming for time in the slot position. They also sured up their backfield by drafting James Cook in the 2nd round of the 2022 NFL draft. Last year, Josh Allen was playing like a man amongst boys, throwing for 4,407 yards and 36 touchdowns. He was always running away from the competition, adding 763 rushing yards while punching it in 6 times on the ground. Gabe Davis has cemented his place as the WR2 on the team, but who can forget Stefon Diggs? He’s been dominant his whole time in Buffalo and has been the main target for Josh Allen. In 2020, Diggs had 127 receptions, 1,535 yards, and 8 touchdowns, followed by 103 receptions, 1,225 yards, and 10 touchdowns in 2021. He just signed a 4-year deal with Buffalo, cementing himself as Allen’s number 1 target. This team is hungry for 2022, with extremely high expectations going into the season. They won’t back down, and they’ll put up points. Be careful playing the Buffalo Bills this season.

Justin Herbert and the Chargers have been turning heads, and winning hearts, (and games) since entering the NFL. After taking the league by storm in his 2nd year, throwing for 5,000 yards and nearly 40 touchdowns, year 3 will be one the whole NFL will have eyes on. Just take a look at this offense, what is there not to like? They arguably have the best wide receiver combination in all the NFL in Keenan Allen and Mike Williams. Allen had yet another 100 reception, 1,000-yard season, adding 6 TDs last year. He’s been the definition of consistent and reliable. Even as Allen ages, his motor continues to run smoothly. Williams was also a member of the 1k receiving yard club. Finishing with 1,146 yards on 76 receptions and 9 Touchdowns, Williams was a big play waiting to happen. With two options like these to throw too, Herbert just can’t miss! Austin Ekeler played a full season, and his outstanding performance wasn’t shocking. The do-it-all back had a fantastic year getting 911 rushing yards on 206 attempts and punching it in 12 times on the ground. Additionally, he contributed 70 receptions for 647 yards and 8 receiving touchdowns. L.A. is all charged up and ready to start the season strong, with expectations of a bigger finish. Justin Herbert has shown to be a fantastic leader, and his troops behind him show full support. This team is ready for battle, and they have to be, being yet another team in the AFC West.