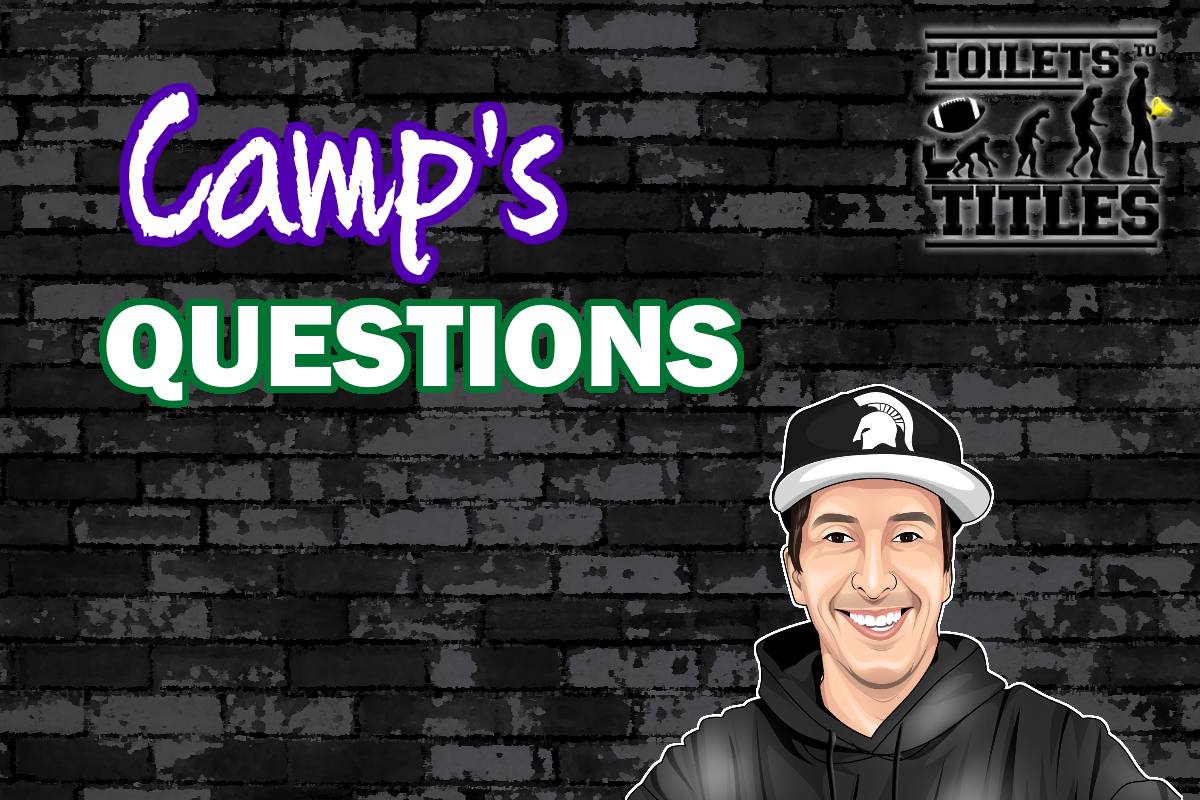 Editors Note:- Throughout the season we’ll be asking Toilets to Titles team members to answer us a few questions.
Today we have Alex, Joe, and Nate to answer some questions on 2021.

Did you see any player in this week’s preseason matchups that you think showed superstar ability that isn’t currently thought of in that tier?

Alex – I did not see anyone that showed superstar ability but I will tell you a player with which I was impressed. Dwayne Haskins. Haskins looked like a totally different player out there versus what we saw from him last year with Washington. He was making decisive, methodical throws. He was progressing through his reads well and was making good decisions with the ball. Haskins seemed a bit excited because he was throwing with little too much zip on the ball at times but that will is correctable.

Joe – Terrace Marshall, Jr. He went 3-5 for 88 yards in last week’s preseason game. 60 of those yards came on one play. Is it even fair for me to include him? I’m not sure because, to me, there never seemed to be as much national attention paid to him, but I always liked him and I always viewed him as someone with superstar potential. I see it as being that it’s easy to forget about him because this was such a deep draft class especially at WR. Heck, don’t forget either about Rondale Moore paired-up with DeAndre Hopkins but I think Moore was always viewed more (no pun intended) highly with concerns only being his injury history. Moore is also flashier than Marshall. Marshall comes from WR Factory (aka LSU) so that means something to me. He’s also playing with DJ Moore which helps him too. I’m not saying that his 88-yards on 3 receptions means automatic stardom but I think its a fair indicator of what I believe his potential is. I think Carolina overall had one of the best draft classes and really added nice depth to their O with Marshall, Hubbard, and Tremble. If CMC has lingering issues with his injury, I think Hubbard could be a surprise stud for them.

Nate – I guess I’ll say Mac Jones. Only because a lot of people think the pats reached or he stinks. I thought he looked great. He throws with anticipation and has a nice rhythm running the offense. He’s incredibly accurate and has the big arm you need. I wouldn’t be surprised if he started week 1.

When do you see Justin Fields starting his first game?

Alex – If Fields continues to perform at the same high-calibre he did in the first preseason game, I believe the Bears won’t be able to keep him off the field. I think they feed Andy Dalton to the wolves week 1 and let him start against a stout Rams defense. After Dalton has a poor outing against one of the best, predicted, defenses in the league, they will hand the reins over to their new young superstar, Justin Fields..

Joe – Dang (LOL) — that is a tough question. Based on last week’s performance I’d have Fields pencilled-in on Day 1. But if I’m the Bears front office I’m waiting to see how the rest of the preseason games go. I wouldn’t throw him in there until he’s ready. If, however, he continues to play like he did last week (which would indicate to me that he’s ready), then I believe he’d start Day 1. I don’t see why he shouldn’t, in that case.

Nate – Week 6. Matt nagy is a doofus and won’t start him because they have a plan in place. And god forbid they stray from the plan. I am behind them to an extent with waiting to start him. He’s got a ton to learn as far as the reads and progressions stand among a pile of other things. I think the red rocket is a good guy to teach him how to be an nfl QB on the sidelines and off the field. On the field he does well between the 20s, so maybe Justin can learn something. And with that dumpster fire of an offensive line week one against the Rams is the last place I’d want fields to start. Aaron Donald is going to have a field day tossing the bears QB around like a grizzly bear tosses salmon out of a stream.

What is the number 1 thing you’re interested in during the pre season?

Alex – I have dynasty stashes in mind when I’m watching preseason football. I’m looking to see if the stashes that I have accumulated over the offseason are getting playing time and looking good or I’m looking for that next stash player. Another thing I keep an eye for are glimpses into the depth chart. Did a team play their starters? If they didn’t, is there anyone that wasn’t out there playing that I thought might be a 2nd teamer. Some teams will keep certain players off the field during preseason if they have plans for them in the regular season. All-in-all, when I watch preseason, it’s more important to me what I don’t see then what I do see on the field.

Joe – My answer is going to be boring but it’s absolutely how I feel — What is most important to me is that I want players to transition from preseason to the regular season HEALTHY. Injuries are going to happen — that’s the nature of the game — but there’s nothing more deflating as a fan when players that you were either really counting on for the year — or who need experience to develop — don’t see the field because of injury.

Nate – Offensive line play and the rookie QBs involved in the QB controversy around the league. These dudes have a legit shot and have shown that they probably need the reigns to the sleigh sooner rather than later. Im excited to see how they progress and who takes the necessary steps.

But I’m even more exited to watch the big boys in the trenches. My Packers have some holes to fill. Josh Meyers out of Ohio state looked good at center against the Texans. But he’s got big shoes to fill. I think he’ll be fine and be a darn good center for years to come. The bears can’t seem to keep their line heathy. I’ll be keeping a close eye on the offensive line play around the league.