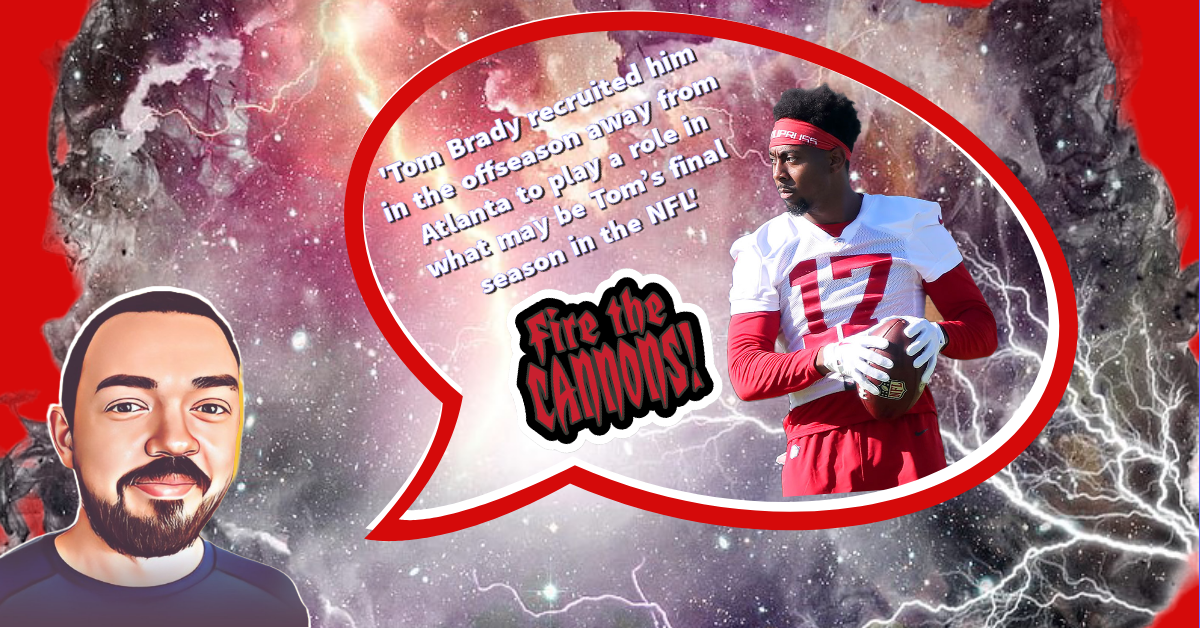 One of the darlings of the offseason. Up until the signing of Julio Jones and Chris Godwin being cleared to practice, people thought Gage could be a top 24 WR for the first quarter of the season. Tom Brady recruited him in the offseason from Atlanta to play a role in what may be Tom’s final season in the NFL. This led many to believe he would have a significant role within the offseason. An offense that has regularly supported two top options per week, even if those targets and stats were rotated between 4 players last year between Antonio Brown, Mike Evans, Chris Godwin, and Rob Gronkowski, who all played vital roles as players rotated in and out of the lineup due to injuries and other issues. Gage was a crucial part of the Atlanta offense after the departure of Calvin Ridley as he averaged 8.5 targets in their final 8 games of the season. The question is though, given the addition of Julio Jones and Chris Godwin returning to training camp, is Russell Gage a viable option within fantasy for the 2022 season?

Gage played sparingly in his first season with the Falcons but was more heavily involved in the Falcons’ offense starting in Week 8 of the 2019 season, receiving 5+ targets in 7 of their 9 final games of the season. He capitalized by averaging 5 catches during that stretch and showed his ability to be the short area target in an offense that had Ridley and Jones running the deeper routes. He parlayed that into an even bigger role during the stretch run of 2020, when Julio Jones missed time due to injury, averaging 14 PPR points in that 6 week stretch. His role largely stagnated through the early part of 2021 as the Falcons had moved on from Julio Jones but drafted Kyle Pitts with their first round pick. This has been the pattern for Russell Gage. The production came with others out of the lineup, like when Calvin Ridley took his sabbatical, his role increased and opportunity equaled fantasy viability. In the final 8 games of the 2021 season, Gage averaged 16.1 PPR PPG as the offense had no other major weapons since Patterson was struggling, Kyle Pitts was seeing double coverages, and defenses keying on Gage. This in contrast to the 32 PPR points he scored in his other 6 contests of the year ( he was inactive for 3 games).

So given all of that information, how does he fit into the Tampa Offense? Those suggesting he will fill the role of Antonio are mistaken, as AB has historically had much more success with intermediate and deep routes. Whereas, Gage has a career ADOT under 9 and has primarily been used as a sure handed short area target. He will take over a combination of the targets that Tyler Johnson had last year, as well as help ease Chris Godwin back into the lineup in the early parts of the season. 5-7 targets a game is a realistic expectation although given the offense and Tom Brady’s prevalence to spread the ball around there will likely be fluctuations to that and 5-7 will be the averaging as opposed to a steady floor.  Gage’s 10.7 YPR and 9 career TDs that likely puts Gage in the 8-10 PPR points per week, but also have splash weeks of 20 points.  Although, he doesn’t have a floor as evidenced by his 3 games last year where he played but didn’t register a stat. That type of volatility isn’t something you want on your fantasy lineup, especially in more basic short lineups with 2 WRs, 2 RBs and a flex.

For those using the argument that going from Matt Ryan to Tom Brady as his QB will equal positive regression, I can understand the argument. However, Gage doesn’t have a history of being a red zone threat which was what made Gronkowski fantasy relevant within this offense, and doesn’t offer AB’s explosive playmaking that made him fantasy relevant. Which leads me to believe he will be a 3rd option as the positive regression goes to Mike Evans and Chris Godwin both of whom should see increased targets this year.

So given the news of the past few days, what exactly is an appropriate cost for Gage? His ADP over the last month is WR39 and 93rd overall.  This will likely regress to the late 40’s with the irrational excitement over Jones but more importantly the confidence that Godwin will start the season. I believe the appropriate cost is in the late 50’s with Tim Patrick, Mecole Hardman and DJ Chark. The late ADP, WR49,  would put him in the Allen Lazard range and I would much rather have Lazard as the WR1 for Aaron Rodgers than Gage and his uncertain role with the TB offense. I would likely draft Gage in the 13th round as more of an insurance in case Evans is injured or Godwin isn’t 100% as Gage has shown viability, without target competition. People should shift to the philosophy of Gage being a handcuff as opposed to someone they can use week in and week out. Within fantasy, a player whose floor is 0 is a liability you can’t have on your team. I would much rather draft Tyler Boyd who is being drafted WR51, since he will at least have a viable role within his offense, where he consistently gets targets. For those of you who drafted Gage at an elevated price this offseason, don’t despair. Injuries happen and happened last year within the TB offense. Gage is also a perfect late round best ball player. TB WRs are all great best ball plays as the production within the offense does fluctuate more than most. Although, currently I am fading Russell Gage at anything close to cost.