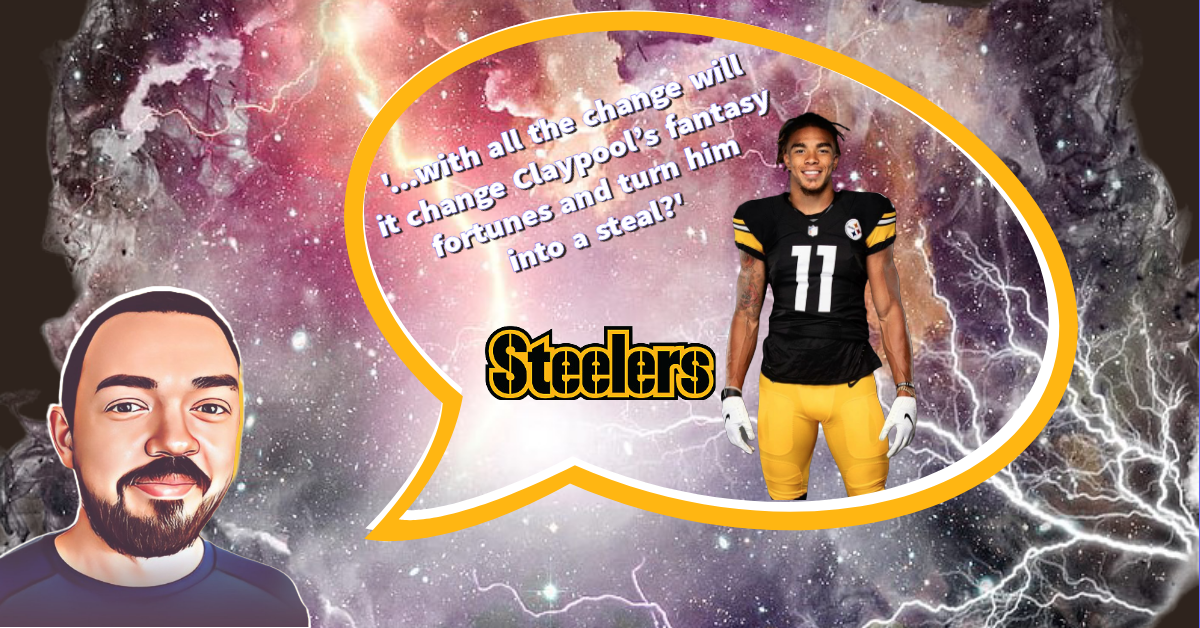 The guy who said he knows he’s a Top 3 Receiver in the league. The Notre Dame product caught a lot of heat for that quote after two years as the WR2 on his own team. Largely the deep threat for the Steelers in his rookie year he posted a very respectable 62-873-9. Thought to be poised for big things in his sophomore year but it was Diontae Johnson who took the step forward into a Top 12 WR. Claypool played a similar role as he did in his rookie season but with a lower ADOT due to the regression in Big Ben’s arm strength. Claypool ended up with a line of 59-860-2 showing major TD regression and, outside of a couple of big games, was largely silent even considering his 7 targets per game.

Coming into his 3rd season he will be competing for targets and playing time with George Pickens, the Steelers’ 2nd round pick out of Georgia who was a top recruit with big time potential who never quite realized it. The team has also moved on with QB Mitch Trubisky likely to enter the season as the starter. Trubisky is someone who I believe has more potential for success and especially fantasy success than most think. With all the change in the Steelers’ offense, will it change Claypool’s fantasy fortunes and turn him into a steal?

His ADP is WR 48 and 109th overall. Given his immense talent, I believe this to be a value. I know people will fade him due to a perceived reduction in passing volume and the threat of George Pickens taking away targets. However, given his relatively stable role in the offense that may also include snaps in the slot this year, I predict a similar target share this year as previous years.  His career 56% catch rate could improve with his role in the slot as they utilize his YAC potential being a career 5 YAC receiver. Trubisky is also a career 64% completion rate QB who will likely spread the ball around more than Roethlisberger who largely keyed on Freiermuth and Johnson around the goal line leading to Claypool’s TD regression. I predict Claypool will end the year with 7 TDs this year.

I especially believe him to be a value in the beginning of the year when Pickens is still learning the offense. He will be an incredibly viable WR3 on your fantasy roster as long as he stays WR2 on Pittsburgh. I also see him being more reliable with Trubisky with an ADOT around 10 and a catch rate of 60%. I do see a reduction in targets to 100 from his average of 107 the past two years. I would draft Claypool in the 9th round of non-SF drafts, especially if you have drafted young receivers like Drake London or Treylon Burks. Although, I wouldn’t draft him over them.  I would draft all of the high profile rookies over him however as they provide more upside in their situations without true alphas on their teams. Claypool is also being drafted after Allen Lazard and Robert Woods. Both of whom will have potential to see WR1 targets this year but both also have major question marks. I would draft Claypool over them. Claypool has the talent to be a breakout on this team this year but I see him more as a candidate to break out in another environment. He is a receiver who will likely get volume on a weekly basis and has the ability to have huge games. This is the perfect recipe for setting it and forgetting it WR3.