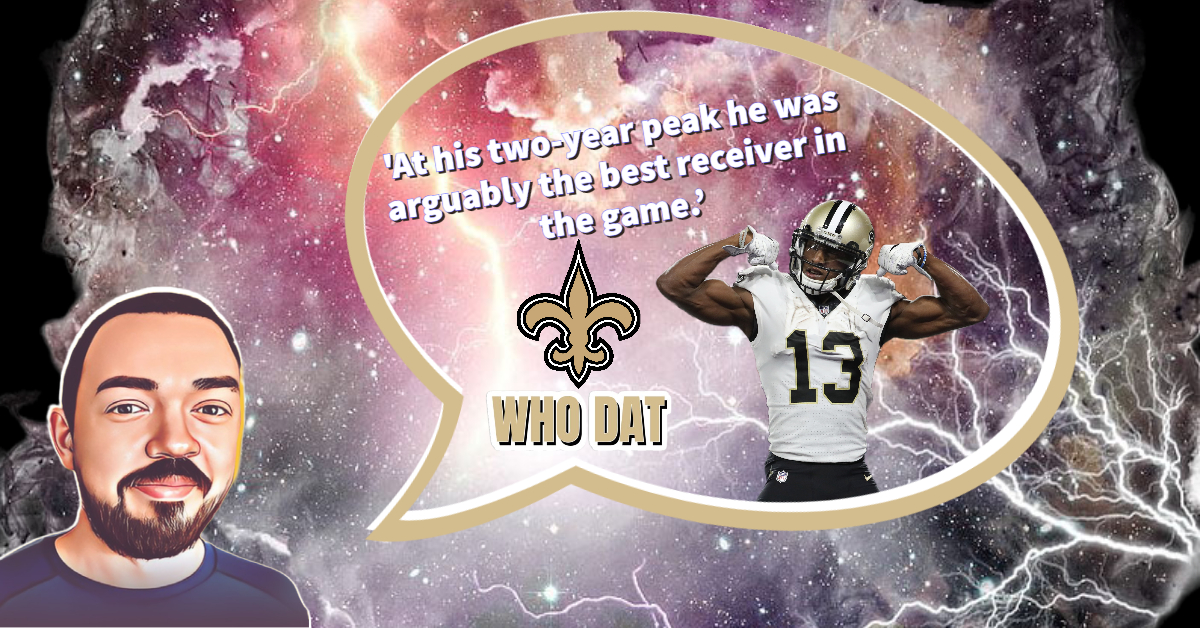 Of all the camp hype and injury news we will be paying attention to over the next month, Michael Thomas and his injury rehabilitation. At his two year peak, he was arguably the best receiver in the NFL, leading in receptions in 2018 and 2019 while also leading in receiving yards in 2019. All of this, with an otherworldly 82.5% catch rate on 332 targets those two years. He benefited by having one of the most accurate QBs of all time in Drew Brees but was setting himself up to be an all timer himself. However, an ankle injury suffered in Week 1 of 2020 has lingered for the past two years forcing him to have surgery that cost him the 2021 season. Even playing through the injury, he had two 100 yard games in 2020 showing his resilience and grit, fighting through an injury that was clearly sapping him of some of his effectiveness. There are multitudes of questions around Thomas but the key ones are, will he be able to be as effective with Jameis Winston at the helm and will he be even close to the same as the player who took the NFL world by storm in 2018 and 2019?

Thomas has always been a master of the short to medium reception as evidenced by his ADOT of approximately 8 in his two most successful seasons. His new QB, Jameis Winston, has always been categorized as a gunslinger with his 30 TDs and 30 INTs in 2019. The narrative last year was that Sean Payton had made him a more accurate QB but the enhanced accuracy could be that the system allowed him to make better decisions with a 14/3 TD:INT ratio. Winston actually had the lowest completion percentage since his rookie year last year. So, how does that affect Thomas? Well, his career catch rate is probably partially due to having a QB who was above a 70% completion rate for the entirety of Thomas’ stay in NO and I project Thomas’ catch rate to fall to 71% this year. I believe that the addition of Thomas and Olave to the offense conversely improves Winston’s completion rate to 63.5% this year. Winston does have one area of vast superiority over Brees: arm strength. This difference makes me project Thomas to have an ADOT of 9.7 and his YPR increase to 12.6. The expert route runner, Michael Thomas, will be effective with any QB but will be able to get a little deeper in routes with the strong armed Winston.

Now the big question about Thomas is injury which is the nebulous part of Thomas’ potential fantasy value. He has made it back on the field and is practicing again. However, his amount of recovery is still unknown and, until we see him in a real game it will continue to be a mystery whether the lingering injury has sapped him permanently of his effectiveness. I believe he plays, although that comes from the optimism that I have in the Saints and the normal recovery time of a surgery he had is only 3-6 months and we are more than a year removed from the surgery. I expect him to be active for week one and be opposite Chris Olave in what figures to be a much improved offense, depending on the legal situation of Alvin Kamara, but is he worth the ADP and can he be a “ league winner” as so many have proclaimed?

His current ADP is WR37 and 80th overall which is likely depressed because of him starting training camp briefly on the PUP and thoughts of last year and his unknown status looming in the minds of owners. He is being drafted around Adam Thielen, Devonta Smith, Russell Gage and the suspended DeAndre Hopkins. I personally think his ADP is a steal. Now as he begins to practice and get back on the field this will likely settle in the upper WR20s and 65th overall. I would draft him in every league even at that price. If he is anywhere near the receiver he was when we last saw him last at full strength he is a top 15 receiver. He may be above that as well but there is reason to believe a certain amount of regression due to target competition and a less accurate QB who will be more likely to push the ball down the field. If drafting Thomas I would also consider drafting Olave as well giving yourself some insurance should Thomas not be healthy. Olave will see high target volume if Thomas is out and is the same type of high level route runner as Thomas ( both from The Ohio State University- WR U). Olave can currently be had for an early 10th round pick. None of the receivers drafted around him provide the same upside except for Hopkins who is suspended for 6 games and showed more of a TD dependence last year than he had previously. Thomas provides upside at current ADP that others drafted around him do as the RBs drafted in that range are CEH and Miles Sanders and the QB is Tom Brady. I have drafted Thomas in many  leagues even before he saw the field. It’s a risk worth taking as people often stray away from long term injuries or players deemed injury risks even if said injuries have healed ( see CMC and Saquon ). I would draft Thomas with a late 6th/ early 7th round pick if needed. However your level of draft will largely determine this. If it is a draft that is fading players like CMC you may be able to pick up Thomas later. Or conversely if it is a draft that tends towards big names maybe draft Thomas earlier as someone will draft him hoping for a return to 2019 glory. But if Michael Thomas is healthy the investment will pay off even if you go a round above current ADP.