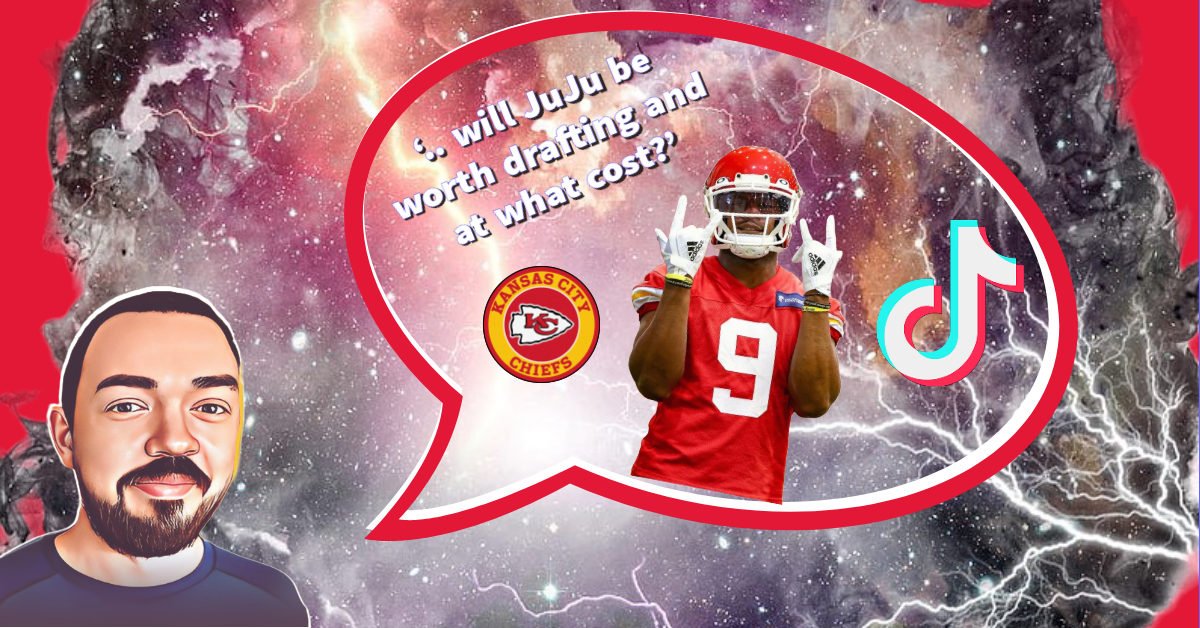 Once a media darling, discussed fondly, riding his bike to practice as a rookie and being a stark contrast to the more brash behavior of fellow wide receiver, Antonio Brown. JuJu took the league by storm late into his rookie year with 3 big time performances in 2017 in the fantasy playoffs. He turned that into a Pro Bowl 2018 season with 111-1426-7. The next few seasons would see him settle into the slot with the Steelers as Diontae Johnson and Chase Claypool arrived. That role provided him with a PPR viable 2020 season with 97-831-9. Last season was lost to injuries and this offseason he signed with the Kansas City Chiefs. This season provides him with the biggest opportunity he has had since his times with Antonio Brown. The Chiefs have over 200 vacated targets with their departures this offseason. The real question, people have been asking themselves this offseason, is will JuJu be worth drafting and at what cost? Well, if the reports are to be believed, he will be the slot receiver with the Chiefs being the sure handed short area target for Patrick Mahomes.

He has a career 68.6 catch percentage and is going to play with the most talented QB of this era. Although, his elite production of 2018 was tied to being the WR2 out wide, away from the coverages reserved for the more elite receivers. His ADOT that year was the highest of his career at 9.7 which dropped to 5.5 and 6.5 as he transitioned to the slot. And he doesn’t have the YAC historically (4.3 YAC from the slot) to believe he can replicate a WR1 season. Meaning his best path of success is tied to being the PPR monster he was in 2020. We saw defenses adjust last year to the fact that Mahomes is willing to be patient and rely on his short area targets evidenced by Tyreek Hill’s career low ADOT last year. Given the career target averages of the new incoming receivers, MVS has a career average of 62 per season, and their likely role within the offense, Juju can realistically see 120-130 targets this year.

Now at WR30 and 69th overall does that lead to value? I would say no. While I believe he will be a productive WR3 his ceiling is capped by his role and the reduced path of high value targets as MVS will likely command deep targets evidenced by a career 17.5 YPR and 16.4 ADOT.  While Travis Kelce will likely command the bulk of the red zone targets as he had 20 TDs in the past two years. The receivers being drafted around him provide more upside with Darnell Mooney, who is being drafted before JuJu, is in line for a massive target share and showed his ability, last year, to capitalize on that opportunity. Some young receivers like Elijah Moore, Rashod Bateman and Devonta Smith are being drafted after JuJu. All of whom will enter improved offenses with the breakout opportunity you look for in the middle rounds.

If you are looking for safe production that you can pencil into your WR2/WR3 slot every week and reasonably expect 12-14 PPR points a week, I can understand drafting JuJu. The evidence would suggest otherwise, given the role he is expected to play, the ceiling is close to the floor and there is little room for upside. If Juju slipped to the early 9th, I would absolutely draft him at that point, where he would represent value to me. For me though, this year there are so many talented receivers in the middle rounds with breakout potential that I will prefer drafting for upside in those rounds.

My Draft Range: Early 9th Round around 100 overall