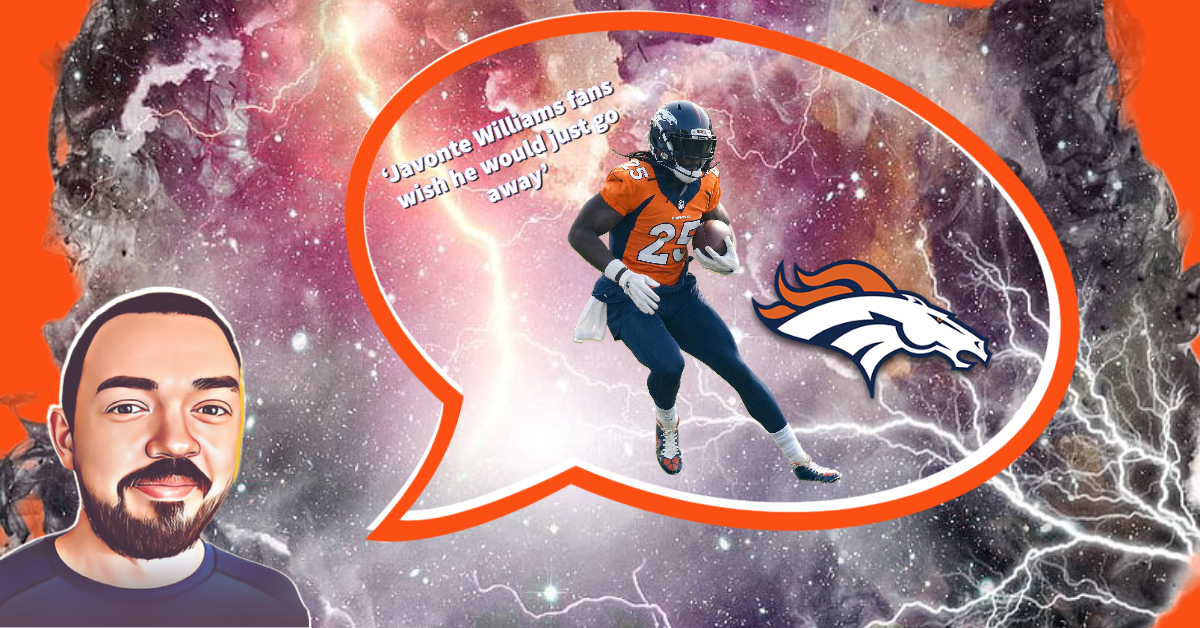 The man that Javonte Williams fans wish would just go away. A player so self aware that he referenced that Fantasy Players would prefer him to be anywhere but Denver. As much as many of us would love for it to be a Javonte Williams’ week or Javonte Williams’ “SZN”, we must not be distracted by how well Gordon played last year. The two men split the backfield, in 2021, so evenly, that they had the same number of carries at 203. Gordon outgained Williams on the ground, just slightly, with 918 yards to Williams’ 903. Gordon also showed the explosiveness he had been known for in his days with the Chargers including a 70 yard touchdown run, in Week 1 which set the tone for the season. As the season went on, many fantasy analysts clamored for Javonte to achieve the breakout they had predicted. Many expected that Williams showcase game (in which Gordon didn’t play) wherein, he compiled 178 yards and a touchdown.  This  moment, in which Gordon finally saw the bench, had to be the ascension to breakout star that the fantasy community, in large, wanted. Alas, Gordon came back the next week with a 24-111-2 performance against Detroit to solidify his viability as a RB2/ flex for the remainder of the season. He averaged 12.7 PPR PPG last year and was a solid, weekly flex option, since he only saw less than 10 touches once and had weekly TD potential, finishing the season with 8.

A lot of people point to Gordon’s offseason, where he struggled to find a home before finally ending up back with the Broncos, as evidence that he is simply an insurance plan in case Williams goes down. While I don’t believe the 50/50 split will continue, I do believe it will be closer to a 60/40 split than people want to believe. Gordon will likely get the early downs work on select drives throughout games, since he didn’t have much of a role in the passing game last year, as the season wore on. A larger role than 60/40 is unlikely as Williams was never the workhorse in Chapel Hill either, sharing time with Michael Carter. The targets in the offense were already shifted in Javonte’s direction with Williams catching 53 to Gordon’s 38 last year. A reduction from 50/50 to 60/40 will still leave Gordon a sizable role within the offense even given the arrival of Russel Wilson. Wilson should make the offense more explosive and that may reduce rushing volume overall; the amount of valuable touches will go up as they go from bottom half of overall offenses to a Top 10 offense.

The next question is, does that reduced opportunity cause us to fade the player given his ADP? Currently at RB38 and 107 Overall per NFC ADP, the answer is no. By drafting Gordon, you are getting a weekly flex option, who is also the elite handcuff option. A handcuff who in the past has shown the ability of being an elite RB1. The terms lottery ticket and league winner come to mind. He will provide you with a safe floor of 10 touches and 8-10 PPR points with plenty of TD potential. In late round 9/ early round 10, where Gordon is currently being drafted. Gordon is a back who can both be a flex on any given week, and also has the potential to be an RB1, if Javonte gets injured, is exactly what you are looking for in this area of the draft. Running backs like Alexander Mattison and Isaiah Spiller will likely need an injury to ever see your lineups, during the year, and may be in consideration of being dropped as we get into the rougher bye weeks. With Gordon, that isn’t the case.  As there is value, even if Javonte never gets hurt. If you draft Javonte in Round 2/ Round 3, then Gordon is a must draft.

Gordon is at the perilous RB age cliff but is still an incredibly efficient back, averaging 4.5 YPC and 7.6 YPR. That type of efficiency will keep him involved and will get you weekly value within your lineup. I wouldn’t draft Gordon ahead of ADP though and would wait. In the middle rounds, especially with players on the wrong side of a timeshare, you can always count on buyer’s remorse. Especially in short bench leagues. If Javonte has a good opening week, someone may drop Gordon in search of filling other needs. So if you’re on the board in Round 10 and he’s there and there isn’t anyone else you want or “ one of your guys” then take Gordon and feel good about it as you’ve bought the dip on his value. Although, if someone drafts him you can always trade for him later as value wanes or wait for someone to drop him. In an offense where no consensus can be formed, on which receiver is WR1 or what round Javonte should be drafted in, I would absolutely buy in on Gordon, as Denver will likely have a Top 10 offense. In my leagues I will have more shares of Melvin Gordon than Javonte Williams and I’m perfectly happy with that.