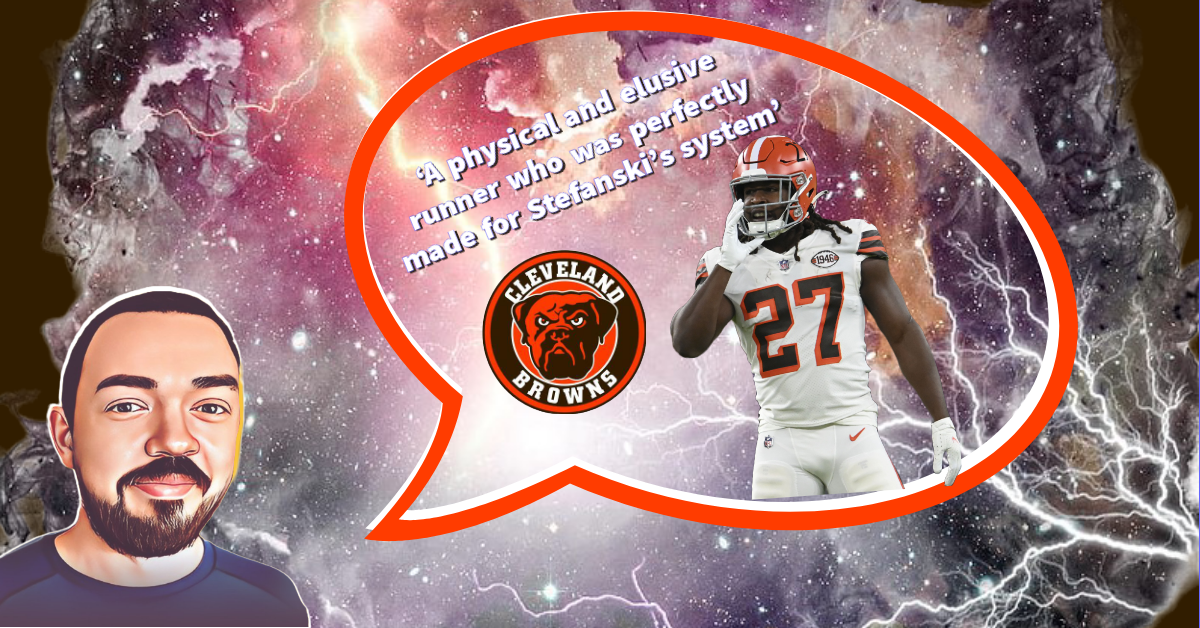 One half of the most successful RBBC in football, Kareem Hunt has been a fantasy viable running back since his rookie year.  He averaged 19.2 PPR PPG as a rookie and was a key part of the explosive KC Chiefs offense. He averaged 22.2 PPR PPG in his sophomore season before his off the field transgressions got him released from Kansas City and suspended for 8 games by the NFL. He found a home with the Cleveland Browns. After serving his suspension, he struggled in his 2019 season to get integrated into the offense that had committed to the running game behind Pro Bowler Nick Chubb. In his first full season with the Browns, in 2020, he played every game and averaged 12 PPR PPG as he consistently got 15-18 touches per game and became a vital part of the passing game with 5 receiving TDs. 2021 was an injury marred season in which prior to injury he averaged 16.9 PPG and showed the potential of being a top 24 running back. But with the addition of Deshaun Watson and the uncertainty regarding the QB, what does it mean for Hunt’s prospects going into 2022?

Hunt is a physical and elusive runner who was perfectly made for Stefanski’s system, he has consistently averaged more yards after contact than before, as evidenced by averages of 2.1 yards before contact and 2.8 after contact. This makes him a valuable asset within their scheme and likely to retain the role, even with the ascension of D’Ernest Johnson last year in spot starts. His most valuable asset to your fantasy team is his passing game role as he has a near monopoly of the role given that Nick Chubb hasn’t gotten more than 20 targets in either of the years since Hunt’s integration into the offense. Which brings us to the point of why most people are fading him this year and why that will actually be a positive to Hunt if it comes to fruition. The suspension of Deshaun Watson and the back up being Jacoby Brissett who has solid but not spectacular stints with the Indianapolis Colts and Miami Dolphins and is best described as a spot starter/ quality backup. While the length of suspension seems to be a topic of hot debate, the question of whether Watson will be suspended doesn’t seem to be. The trade of Baker Mayfield entrenches Brissett as the backup who will start while Watson is suspended.

Why would this be a positive, you ask? Well, Brissett targeted RBs at a 23.1% rate last year while Watson only targeted RBs at a 16.1% rate in his last full season of 2020. Any concerns about regression of offense meaning less overall touches for Hunt and Chubb should remember that they operated efficiently with both backs posting startable fantasy numbers with their QBs being an injured Baker Mayfield and Case Keenum. So the expectation should be 6-8 targets per game for any game that Brissett starts and Hunt has a 80% career catch rate and has posted more than 7.4 yards per catch in all seasons of his career.

So you have a back that is excellent after contact and is the team’s passing downs back with an incoming QB who loves to check down to RBs but, what is the cost? ADP for Hunt is currently RB33 and 92nd overall. At this cost, he is my steal of the draft. I will try to leave every draft I am in with Hunt. I drafted him in the Scott Fish Bowl with the 98th pick in a superflex league. I have drafted him consistently in other leagues starting in the 7th round. I believe his actual value lies in the 70-75 range of late 6th/ early 7th in 12 team leagues. He is a plug and play RB2 with potential to be the overall RB1, if Chubb were to ever go down for an extended period. People forget that Hunt was averaging over 20 PPR PPG during his time with the Chiefs. He should be the darling of all those who forgo RB in the early rounds for WRs such as Jamarr Chase and Justin Jefferson and TEs such as Kelce and Andrews. He can provide you with top 12 weeks and has a stable floor of 10-12 points. While I don’t like the term “ League Winner” he is someone who you are more likely to win on a weekly basis if he is on your roster. He is being drafted behind Damien Harris who is TD dependent, Miles Sanders who has no TD equity in an offense that will be increasingly competitive for touches, and the Seattle RBs whose efficiency will drop without the threat of Russell Wilson throwing it and face probably the worst QB situation in the league. He should be drafted in the early 20s in RBs and early 70s overall. Buy the value. Let the others pay a premium for the marquee names of the offseason. Take the value which has shown that he can be a top 5 talent at position and has a role that has a probability of a top 24 RB finish.